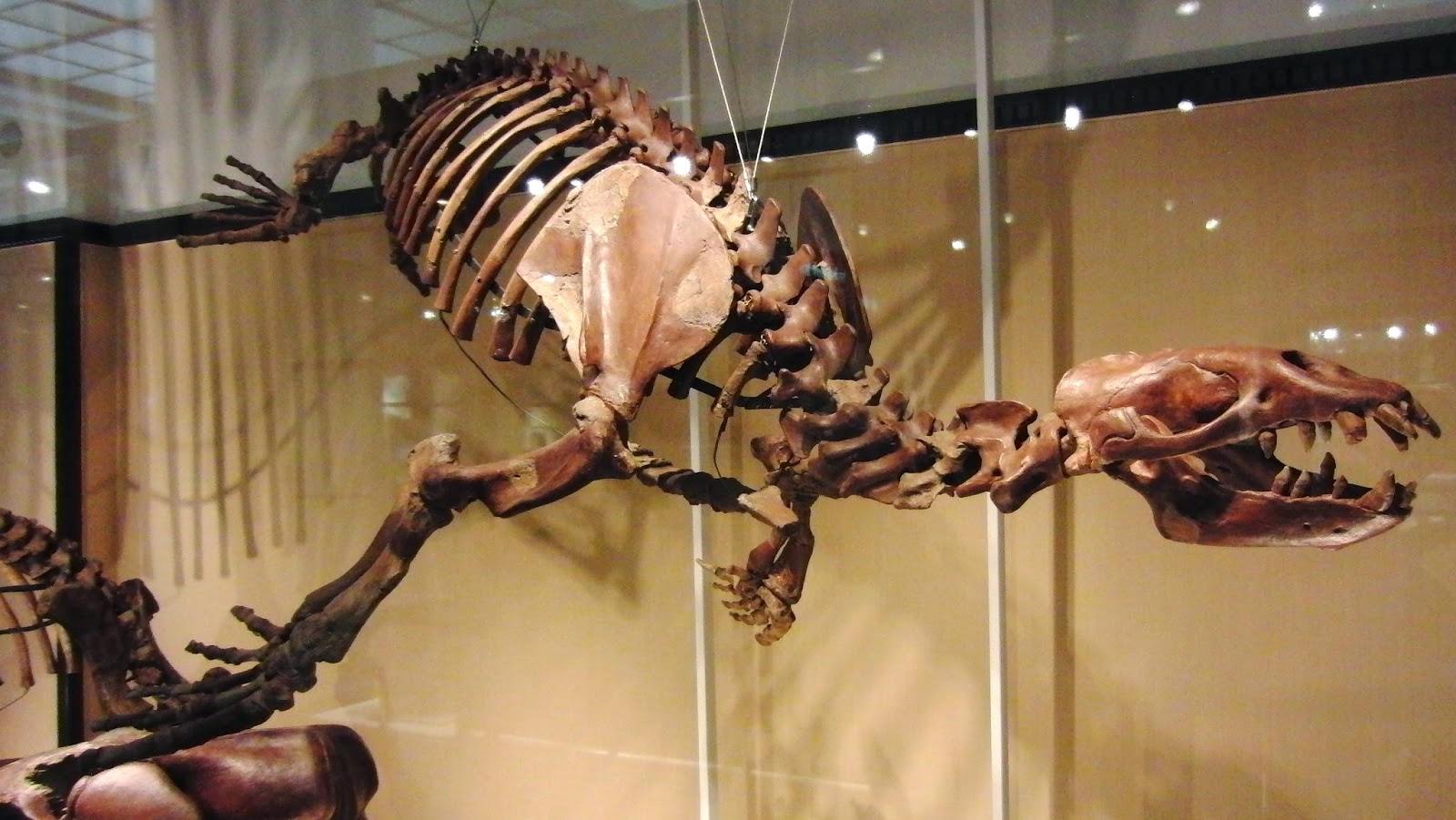 An undescribed skeleton of Allodesmus from the Miocene of Japan, on display at the National Museum of Nature and Science in Tokyo.

The abundance of Allodesmus in the Neogene marine record in concert with its completeness made investigation of its paleoecology and life habits inevitable. However, most of what follows is scoured from a few publications, and ample scope for further studies of functional morphology, ontogeny, and sexual dimorphism exist for future researchers. 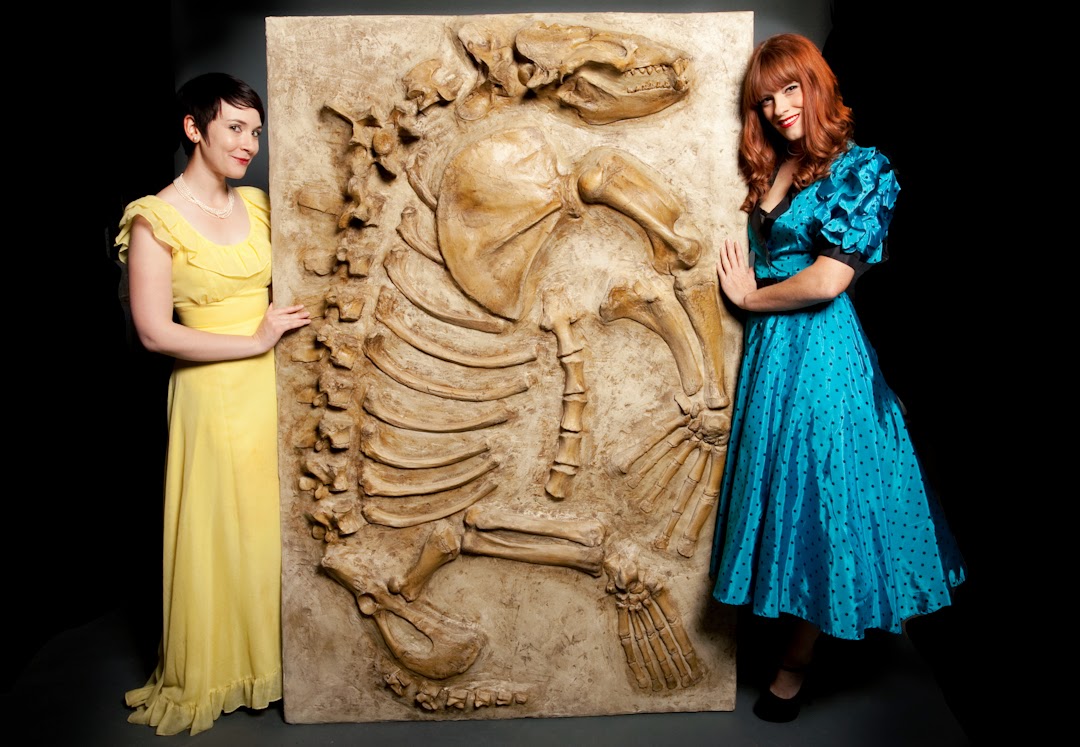 This doesn't really belong anywhere in here, but when I found this strange photo I knew I couldn't leave it out. Ignoring the bizarre pose and composition of the slab and the unecessarily included models, this picture does actually give you an idea of how large Allodesmus was.

A few studies have touched upon growth in Allodesmus, and have mostly discussed issues of age determination rather than growth-related changes in morphology. Mitchell (1966) briefly investigated epiphyseal fusion in Allodesmus, and found that (unsurprisingly), in the forelimb epiphyses fused at the elbow before other parts of the forelimb, and that in the hindlimb, fusion begins at the hip and ankle before progressing to the knee joint (for casual readers, epiphyses are the ends of long bones that begin as separate osteological units and later fuse to the shaft – known as the diaphysis – the radius and ulna have a proximal epiphysis, a distal epiphysis, and the diaphysis; the diaphysis generally composes most of the bone).
A classic and widely used method for age determination in pinnipeds and other marine mammals is counting periodic growth marks in teeth in sectioned teeth under a microscope. Additionally, in pinnipeds (and presumably other carnivores) preserve a series of annular ridges/grooves in the root, corresponding to periodic growth marks in the cross section of the tooth. Mitchell (1966) was one of the earliest researchers to apply this method to fossil pinnipeds, and sectioned teeth of Allodesmus from the Sharktooth Hill Bonebed. Although the canines of the Allodesmus kelloggi holotype did not yield good results owing to “varying replacement phenomena” (unclear if this refers to an in vivo process or diagenesis), canines of similar size (and presumably root closure) were sectioned and exhibited a minimum of 13 growth marks, suggesting a minimum age of 13 years for Allodesmus kelloggi.
Allodesmus kelloggi was estimated to be 2.6 meters in length by Mitchell (1966); this is the most complete skeleton of a desmatophocid known, so other Allodesmus (=Allodesminae of Barnes and Hirota, 1995) may be scaled from this species. It should be pointed out here that Allodesmus kelloggi is the smallest known species of Allodesmus. Mitchell (1966) pointed out that other specimens from Shartooth Hill would be much larger (up to 3.35 meters), surpassing even the Northern sea lion Eumetopias jubatus (3+ meters) in size. Taking measurements of other skulls of Allodesmus, small body sizes for Allodesmus sadoensis (2.1 meters) and Allodesmus packardi (2.2 meters) are probable. A much larger body size is indicated for LACM 9723 – the largest known Allodesmus kernensis/gracilis specimen – this individual, scaled up from Allodesmus kelloggi, would have been 3.8 meters in length. Lastly, the positively enormous adult rostrum of Allodesmus sinanoensis (=Allodesmus megallos of Barnes and Hirota 1995) would have been a whopping 4.8 meters in length! To put this in context, this would be an animal the size of the largest male Northern Elephant Seal (Mirounga angustirostris – 4.3-4.9 meters), and surpassed only by the Southern Elephant Seal (Mirounga leonina – 4.2-6 meters).
Despite having a relatively large sample size from the Sharktooth Hill Bonebed, little investigation of sexual dimorphism has been attempted – and remains a lucrative research topic for future researchers. 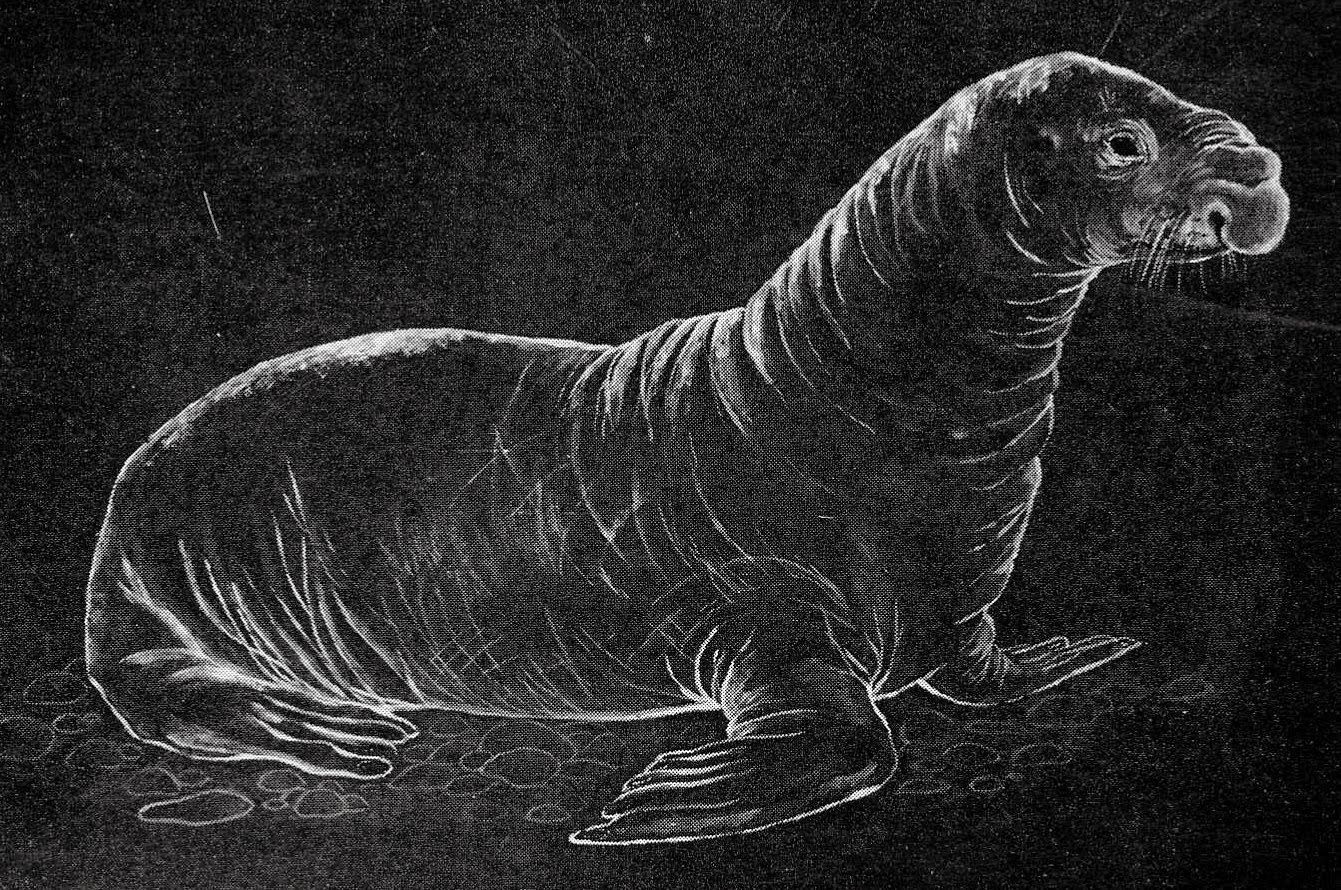 Mitchell's (1966) elephant seal-like reconstruction of Allodesmus. Although some have criticized the addition of a proboscis (Adam and Berta, 2001) I don't feel like it's such a bad call myself. However, more time looking at the structure of the prenarial shelf in this pinniped would permit me to make a more informed interpretation. 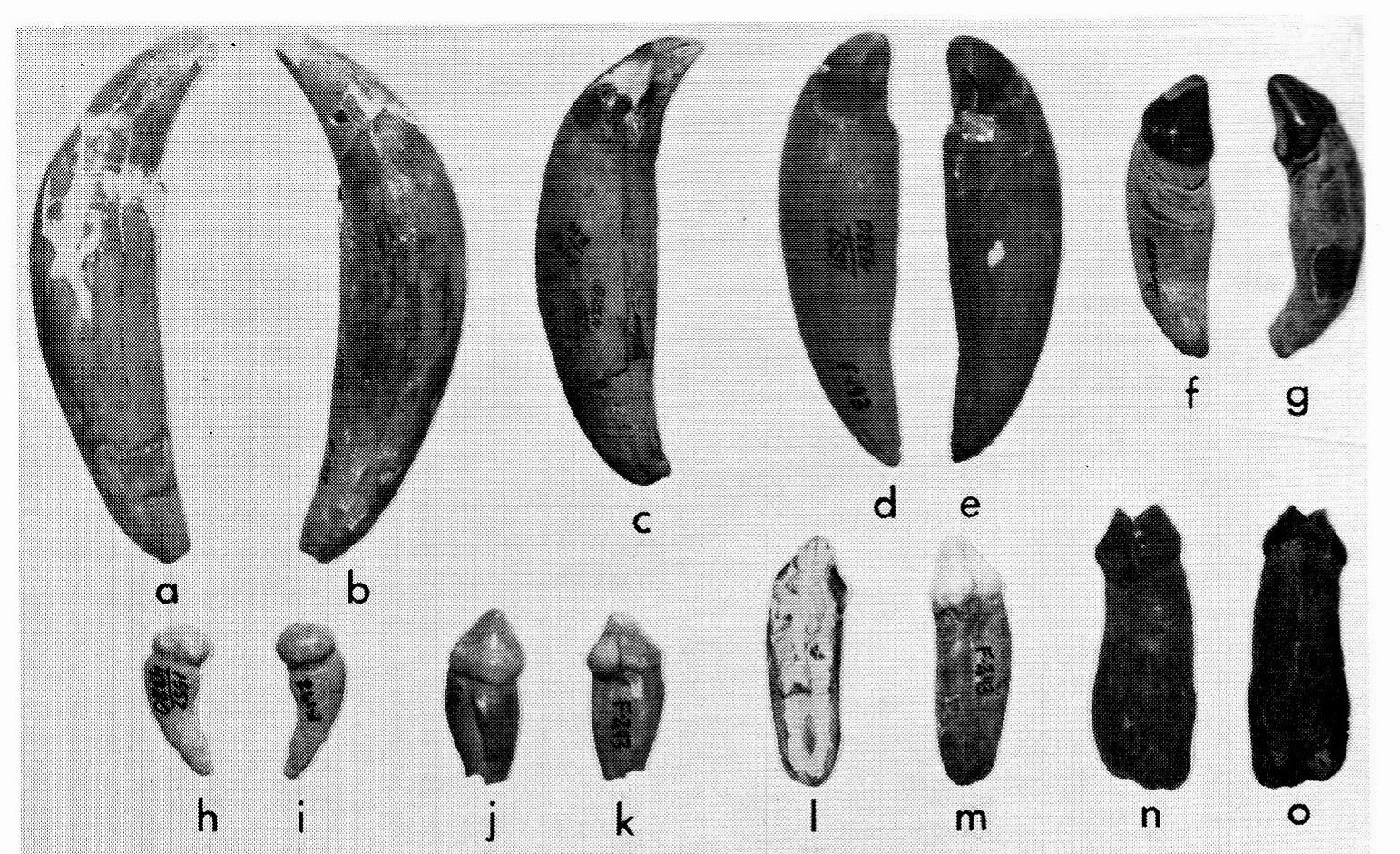 The skull of Allodesmus is quite different from many other pinnipeds. It has one of the proportionally longest palates of any known pinniped, fossil or modern. All of the teeth of Allodesmus are single-rooted with bulbous, simple cheek teeth bearing a single cusp; isolated Allodesmus teeth are frequently found by fossil collectors at Sharktooth Hill and appear “phallic” to many amateurs (check out the photo; you can do the math). The canines are relatively small in Allodesmus in comparison to similarly sized otariids and odobenids (with the exception of the adult “snout” of Allodesmus sinanoensis; =Allodesmus megallos of Barnes and Hirota, 1995). The mandible is relatively gracile but bears a well developed flange for the digastric insertion, as in modern elephant seals (Mirounga). Allodesmus curiously lacks well developed nuchal and sagittal crests as in many fossil and modern otariids and many odobenids, and also has an unusually small coronoid process of the mandible – suggesting reduced temporalis musculature (the temporalis is the primary jaw closing muscle; those of you who are dog owners can feel it by petting the top of your dog’s head while it is chewing; cat owners should not try this). Lastly, the eye sockets of Allodesmus are proportionally enormous; they are so large, that Debey and Pyenson (2011) suggested that Allodesmus was a deep diver, like modern elephant seals.

The lengthening of the palate is probably related to suction feeding (Adam and Berta, 2002), and Allodesmus was reconstructed as a pierce/raptorial feeder by Adam and Berta (2002). The simplification of the postcanine teeth and reduction in size of the posterior postcanine teeth suggests reduced utility of the dentition, potentially even more so than other pinnipeds. The underdeveloped cranial crests and small coronoid process suggests a decreased importance of jaw closing musculature relative to many other pinnipeds. All of this, in concert with the enormous eye size and potential deep diving ecology, in my opinion, suggests a possible suction feeding elephant seal-like habitus. However, it is important to note that craniodental morphology correlates poorly with diet in pinnipeds. 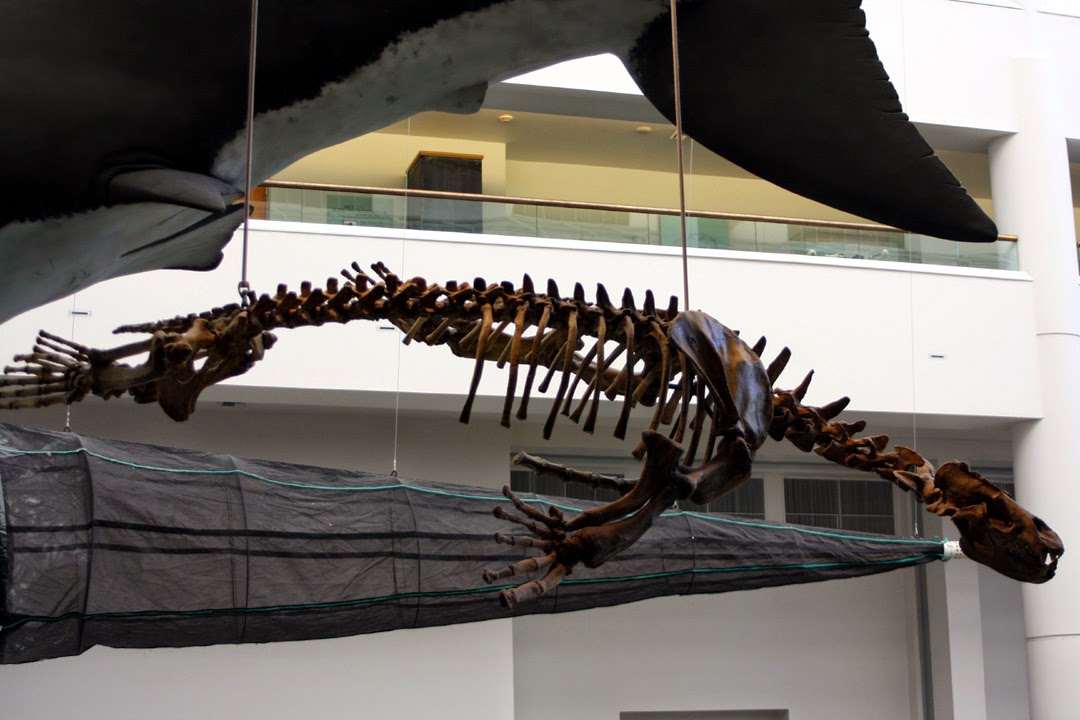 Allodesmus kernensis (=Allodesmus gracilis of Hirota and Barnes, 1995) at the San Diego Natural History Museum reconstructed in a very sea lion like pose. Check out the length of the forelimb - at first glance, it screams "sea lion" in terms of function.
Locomotion

Osteological characteristics of limb bones and the hypothesized monophyletic clade formed by desmatophocids and phocids (Phocoidea) led Berta and Adam (2001) to interpret Allodesmus as a hindlimb-dominated swimmer. However, a subsequent study by former Gingerich student Ryan Bebej (2009) based on proportions of limb bones identified that Allodesmus was most similar to modern fur seals and sea lions, which are forelimb-dominated swimmers. In fact, fur seals and sea lions swim in a somewhat similar fashion to penguins (although have a forelimb that bends more at the elbow). Interestingly, Allodesmus was found to be slightly less aquatically adapted than extant pinnipeds by Bebej (2009), which is borne out by the fact that Allodesmus first appeared within the first 10 million years of the evolutionary history of pinnipeds. Significantly, Allodesmus has an otariid/odobenid like ankle, indicating that this pinniped could terrestrially "walk" as opposed to wriggle like modern earless seals (Phocidae). Modern true seals cannot rotate their ankle forwards, meaning their hindflippers are always pointing posteriorly and cannot be used for locomotion, and so they must wriggle around awkwardly on beaches like a kid trapped in a sleeping bag.

Lastly, Allodesmus is now known from the middle and late Miocene of California, Baja California, Washington, and Japan. This indicates that this genus was widely distributed across much of the Northern Pacific, including most of the west coast of North America. Allodesmus had a circum-North Pacific distribution, paralleled with many other Mio-Pliocene marine mammals (Desmostylus, Paleoparadoxia, Albireo, Kentriodon, Thalassoleon, Callorhinus, Hydrodamalis, Dusisiren, and many others), and many modern cetaceans and pinnipeds. Allodesmus courseni (=Atopotarus of some authors) and Allodesmus kernensis are known from both California and Japan, suggesting that some species of Allodesmus may have enjoyed a wide geographic range. Curiously, desmatophocids never escaped the north Pacific. Why? My hypothesis would be that Allodesmus was cold-water adapted, and unable to cross the warm equatorial waters that serve as a formidable thermal barrier to north-south dispersal even today. Similarly, Allodesmus never invaded the Atlantic, suggesting it was unable to disperse through the Central American Seaway, although many pinnipeds and other marine mammals were able to disperse from the western North Atlantic to the eastern South Pacific during the Miocene.

Next up: part 4, the controversial phylogenetic position of Allodesmus, and future directions for research.

P.J. Adam and A. Berta. 2002. Evolution of prey capture strategies and diet in the Pinnipedimorpha (Mammalia, Carnivora). Oryctos 4:83-107.