Beautiful sunsets can often be seen along the California coast, especially during the winter. This is about eight photos spliced together; although some weirdness happened due to the waves, it looks alright.
Posted by Robert Boessenecker at 1:45 PM No comments:

Before I continue, I need to give a shout out to Nick Pyenson - Nick initially forwarded Dr. Smith's emails to me, and this project has wasted a third of my summer. No, but seriously, thanks.

After putting the top jacket on, then came the problem of how exactly I was going to A) undercut it and B) actually flip it over. Normally, a trench is cut and then the pedestal is undercut from all sides leaving a pillar of rock underneath, which you can subsequently eliminate and then flip the jacket over. However, this jacket was far too large to do conventionally. And I couldn't really fit tools in all the way around the jacket to really undercut it from all sides. 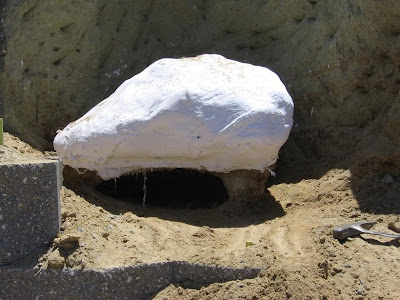 So, in cases like this, go tunneling! I started two holes and dug and dug until they connected, and then widened them into a larve cavern underneath, and then added a hole on the other side. Problem was, this jacket was so large, I eventually couldn't reach the back wall with my rock hammer, and had to use my large estwing pick to scrape away underneath. Tunneling, by the way, is a good recipe for bloody knuckles. 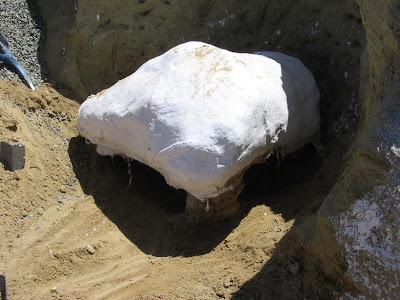 Here you can see more of the tunnel. Aside from these two small columns, the back part remained as a large pedestal in back; the jacket stuck out from this like a surfboard with two pillars. Once I cut the pillars, I figured it would break the pedestal, and tilt forward. 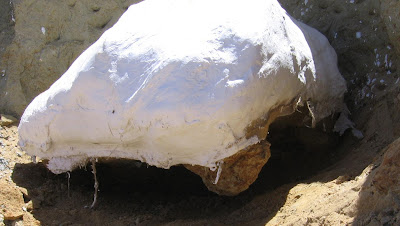 The moment of truth! This was on the heavy side. Well, nothing happened - the left pillar remained still, but I figured it would fail if given this much weight. Apparently not, however - it just hung like this for several minutes. 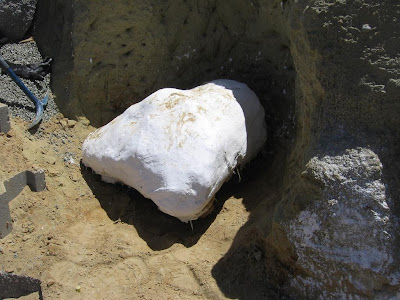 When I cut through the other pillar, it shifted almost imperceptibly forward, but I knew at that instant that I had been successful. Then, I found one of the construction workers to help me flip it over and complete the jacket. 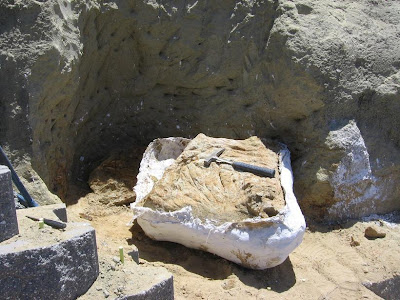 Here's what it looked like - you can see the overhanging plaster; that's where the crack formed, leaving a little bit of the pedestal back in the hole, which I'll excavate in a separate jacket. 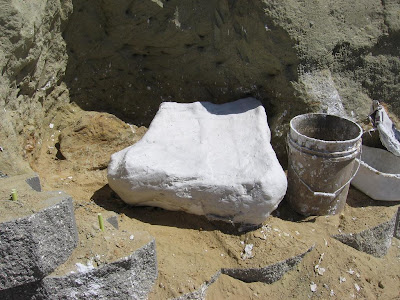 Hey folks, a lot has been going on recently. First and foremost, I've been busy dividing my time between collecting the last remaining data for my master's thesis, vacationing up at lake Tahoe (very difficult), and editing manuscripts. I hit a milestone yesterday - I submitted two manuscripts in the same day. I've been working like a hound the last few days to wrap up the first manuscript I ever started: a paper on the sharks, rays, fish, and birds from a new vertebrate assemblage in the Purisima Formation, titled: "Non-mammalian vertebrate remains from a new marine assemblage near Halfmoon Bay, California: Implications for the age of the Neogene Purisima Formation west of the San Gregorio fault", which I submitted to the PalArch Journal of Vertebrate Paleontology, an open access journal based in the Netherlands. I've heard they could use some more submissions, so be sure to read Andy Farke's interview with the PAJVP editor Brian Beatty, linked above. If you've got an article ~75% finished, put in a long weekend and submit that beast! The other article, "Mammalian bite marks on juvenile fur seal bones from the late Neogene Purisima Formation of Central California", was originally submitted to Palaios in march, and returned for major revisions, and apparently all I needed were three hours of work to finish it and resubmit it. 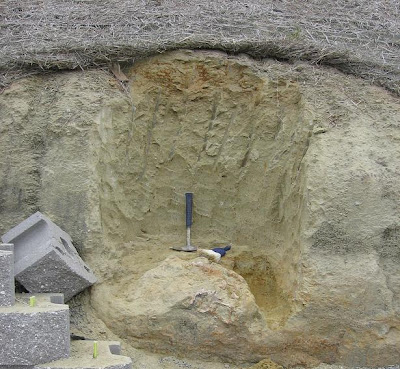 One of the first projects I started this summer was to excavate some sort of a whale fossil at a construction site in Scotts Valley. I was contacted early on in the spring by Dr. Roberta Smith, the project's consultant geologist. Oddly enough, Roberta had been in grad school at UC Berkeley in the mid 1960's when folks like Malcom McKenna and Ed Mitchell were there. To make matters stranger, she had also taught at Howard University and worked at the USNM in Washington D.C., where she knew other well known fossil marine mammal workers Clayton Ray and Frank Whitmore (but stopped teaching there long before Daryl Domning started). Anyway, I'm getting off track. The photo above shows the fossil after a day or so of digging. The exposed bones were not ribs or vertebrae, and I didn't care to expose enough of them for a proper ID due to their relative 'softness'. "What are those cinderblocks doing there?", you ask? Read on... 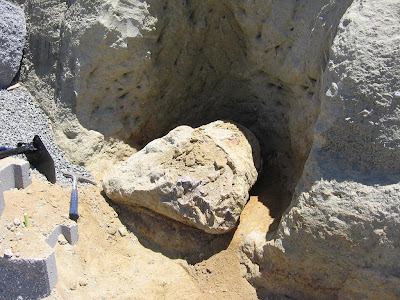 After about a week of day trips and short visits, the trench is nearly completed around the fossil. Bones continue into the back wall, but were too difficult to continue to excavate; I decided that during jacketing, I would try to form a crack across, collect most of it in one jacket, and return to make a second jacket for the rest. 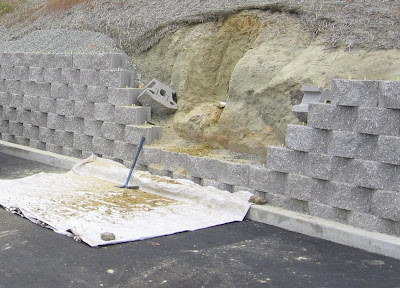 Here you can see why there were cinderblocks in the first couple pictures. They had already put up a retaining wall, and when they found bones, they marked it off and left the retaining wall unfinished. I was able to park only about 8 feet away. This was the weirdest excavation I've ever done. 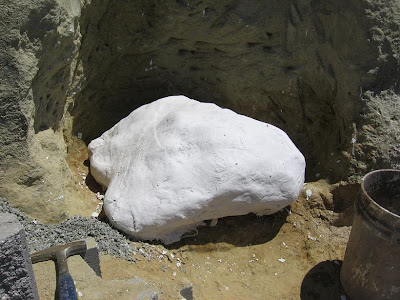 And here is the top jacket finished! Note that the hammer is way in the foreground; the jacket is much larger than it appears, and is nearly 4' by 4', and weighs between 300 and 400 lbs.

The Coastal Paleontologist will return!

Hey Folks - sorry for the hiatus; I've been rather busy dividing my time between excavating a whale from the Santa Margarita Sandstone, collecting thesis data on the coast, and spending the rest of my time on a beach at 6,000 feet - Lake Tahoe, of course. Sufficiently sunburned (not that bad) and with some neat fossils under my belt, I'll resume quasi-regular posting for the rest of the summer. Sorry for the break; next up - excavating a mysticete braincase from a construction site in the Santa Cruz Mountains.
Posted by Robert Boessenecker at 2:06 PM No comments: