I already told the whole story of the excavation in the last two posts. However, if you'd like to see a recap of the whole dig, check out the animation I made below:

On day two, we returned to continue the excavation process. We had mostly pedestaled the specimen on the first day, but we had not yet undercut the block. We thought we could get all of it out in one large jacket. Unfortunately, I knew this might be difficult because there were multiple fractures through the concretion - most concretions I've collected are very strong and have no cracks, but occasionally large ones are fractured, which could spell disaster during the jacketing process. 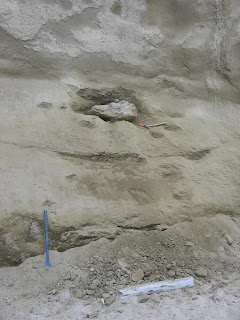 The skull on friday morning. 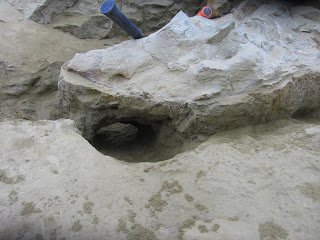 The tunnel I dug under the right side of the skull.
We got back to the locality on friday morning, and began to undercut the pedestal. Normally, a small jacket just requires a trench to be dug around the fossil, and then you undercut the bottom of the trench and dig under the fossil a bit - this allows a lip to be made on the bottom of the fossil with the plaster jacket, ensuring that the entire piece of rock (fossil included) leaves the excavation pit when you flip the jacket over. I've heard horror stories of jacket flipping where a stream of bone fragments pours out of the bottom of the jacket upon removal, and fortunately, this has never really happened to me. On larger specimens such as this, it is routine to dig a tunnel underneath part of it, to ensure that the jacket removes a cohesive block rather than half of it. So, I started doing this, digging from both sides, and after about an hour or so I had a cute tunnel underneath the skull where some strips of burlap could go when it came time to jacketing. 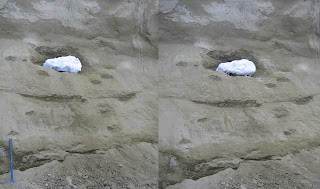 The fossil with dampened paper towel and after application of the jacket.
Late in the day on friday, we finally got to the jacketing process. In all honesty, I had not expected to get to start the jacket until saturday morning - we had scheduled a State Parks ranger to drive by on Sunday at 3pm for jacket pick up, so we knew we had until then. We finished up the plaster jacket right before dinner time. 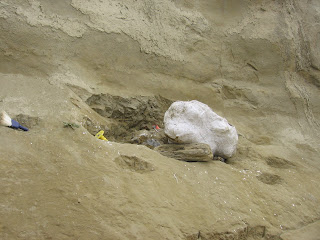 The jacket right after flipping it.
On saturday morning, we quickly moved to undercut the rest of the jacket, "pop" it, and flip it over. This was particularly hairy, because there wasn't exactly any room to flip the jacket - usually you flip the jacket over, and have ample space to let it rotate along whatever surface you have available, which in paleontology fieldwork, is usually the ground. In our case, sure -we had opened up a large shelf we had dug out, but the fossil was already precariously positioned above a ten foot drop to the beach, more than enough distance for the fossil to break into many pieces if it were to fall. More importantly, if the jacket were to fall off the ledge, it would likely take one of us with it, which would really, really hurt. It would have really helped to have a third person, but we were barely able to lift and flip it between the two of us - we had to lift it and slowly rotate it nearly in place, move it to the side while lifting it, and while Des stayed there holding the jacket up from certain destruction, I ran up and down fetching pieces of wood to wedge it so it wouldn't fall off the ledge. During flipping, some of the fractures inside the concretion opened up, and we could feel the block 'flexing' a little bit. Fortunately, it all stayed together. Unfortunately, there were more bones going back into the cliff, which we will not be able to dig out. There was also a small part of the concretion and a possible bit of the skull left in the cliff, which we will have to return for. 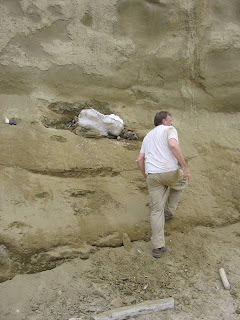 The jacket after the bottom jacket was completed. 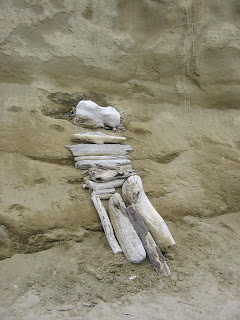 Wooden "backbone" for the sand ramp.
After flipping the jacket over, we were able to put on a plaster jacket over the bottom part of the block. Now that the jacket was completed, we had the problem of getting it down. The block appeared to weigh at least three hundred pounds, and was very heavy due to the concretion inside. There was no safe way to lift the skull down - the heaviest of a jacket that two people of my diminutive stature can manage is about 100 lbs (my friend Chris Pirrone and I once spent four hours moving a 100 lb jacket only 200 feet along a Santa Cruz cliff, while partially submerged at first, then up algae covered rocks, and along a 10 foot high, one foot wide ledge over the ocean, and up several eye-level ledges).

One thing I enjoy about paleontology fieldwork is thinking outside the box. I've had conversations with people who would have used some high-tech rope and pulley system which would have probably been a pain to put together and utilize. In my experience, when moving big (but manageable) pieces of rock, it's best to use methods developed by the masters of lugging around big rocks: the ancient Egyptians. Although it was up rather high, I thought "why not just build a big ramp?". To make it faster, we piled up a bunch of logs: sand usually moves to the angle of repose, and we needed something steeper (so we wouldn't end up with a cone of sand with a twenty foot wide imprint). The logs trapped the sand, and we were able to build a steeper ramp. 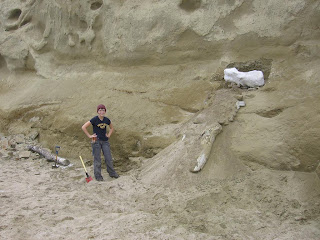 My wife with the beginning of the sand ramp, pretending it was her idea. 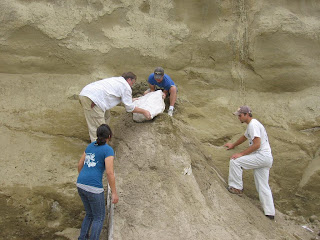 Des, myself, Ash Poust, and Liz Ferrer (clockwise, from upper left) start to
maneuver the block down the incline. 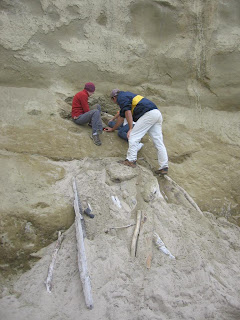 My wife (left, in red), Liz Ferrer (hiding in back), and Ash (white pants)
excavate a bit of the remaining concretion.
It only took us about a half hour to finish the ramp, and once we were done, we climbed up, and started to nudge the plaster jacket. Our friend Ash Poust, who was a friend of ours from MSU and now one of Kevin Padian's Ph.D. students at UC Berkeley, had brought along another one of Padian's students, Liz Ferrer, to help out. My wife sat out on this one, and took photos instead, while the rest of us muscled the jacket down. It worked like a charm, and I could not have been happier with my experiment in 'ancient methods'.

Stay tuned for the next installment!
Posted by Robert Boessenecker at 6:19 PM 2 comments: