One of the most fascinating aspects of the study of marine mammals are the origins of the land to sea transition in various groups. Often marine mammals are so adapted for marine existence, that it is difficult to identify what group (fossil or modern) they descended from. Such has been the case with the origin of whales, for example. While I'm certainly interested in cetaceans, there has been a ton written about them, and I'm currently more intrigued by pinnipeds.

While modern cetaceans don't necessarily look like their artiodactyl relatives, pinnipeds generally retain enough features that allows them to be readily identified as carnivoran mammals, straight down to the dog-like bark of California sea lions. Certainly, this should make identifying the terrestrial progenitors of pinnipeds an easier task. Or does it?

The prevailing opinion throughout much of the 20th century was that the Pinnipedia are diphyletic; the sea lions and walruses formed the "Otarioidea", who descended from the Ursidae, and the true seals (the Phocidae) descended from mustelid (or musteloid) ancestors. In 1973, Ed Mitchell and Richard Tedford described Enaliarctos mealsi from the Early Miocene Pyramid Hill member of the Jewett Sand in Kern County, California. Enaliarctos still bore an ursid-like shearing dentition, which is absent in all modern pinnipeds (which have generally homodont postcanine teeth). Enaliarctos was purported to be the common ancestor of the Otarioidea.

Later work (which at some point will be detailed on here) by Andre Wyss (UC Santa Barbara) and Annalisa Berta (San Diego State University), proposed a drastically different phylogeny of the pinnipeds, which suggested that pinnipeds were instead monophyletic, and that walruses (Odobenidae) were more closely related to the true seals (Phocidae), forming a new group, the Phocomorpha. Dozens of molecular phlyogenetic analyses have unequivocally supported pinniped monophyly, chucking the old diphyletic view out the window. The major tenets of the new studies are the following: 1) all pinnipeds descended from a common ancestor; 2) Enaliarctos is basal to the Otariidae, Odobenidae, and Phocoidea; 3) the Otarioidea is paraphyletic, as odobenids and desmatophocids are more closely related to the phocids; and 4) pinnipeds were derived from an ursid (bear) like ancestor sometime during the Late Oligocene, probably in the Northeast Pacific, where the oldest pinniped fossils are known.

Putative seal femora from the Late Oligocene of South Carolina, from
Koretsky and Sanders (2002).

In 2002, Irina Koretsky and Al Sanders reported on some partial femora from the Late Oligocene of South Carolina. According to Koretsky and Sanders, these femora are most similar to those of extant phocids, and list several features they share in common. However, they argued that the Late Oligocene age of these, as well as the occurrence of these in deposits of the Atlantic Coastal Plain, indicate that true seals were already present in the Atlantic Ocean when the very primitive Enaliarctos was just appearing in the Pacific Ocean. Thus, the monophyletic origin of pinnipeds was not supported by this fossil, and it appeared that true seals evolved in the Atlantic separately from the Otarioidea, which are (during the Oligocene and the Miocene) restricted to the North Pacific.

There are, of course, some issues with this study and its inherent implications, irrespective of the incomplete nature of the fossils. For starters, the fossil record is notoriously crappy; in fact, the Early Oligocene marine record is the poorest of all with regards to marine mammal fossils. Very few cetaceans are known from the Early Oligocene worldwide, for example, primarily due to the scarcity of marine rocks for this time, due to low sea levels caused by the Eocene-Oligocene climate crash. Pinniped fossils just "show up" after sea levels rise and deposit more marine sediments during the late Oligocene, in both the Pacific (Enaliarctos) and Atlantic (Phocid femora). So - it is entirely possible for even more primitive pinnipeds to be found in earlier sediments (or, as "lazarus taxa" in Late Oligocene rocks).

The completeness of these fossils requires additional scrutiny. Some of Koretsky's other work focuses on the major elements of the fore- and hind-limb of true seals (and lower jaws) but generally placing low importance on cranial material (Koretsky and Ray, 2008). Koretsky and Sanders (2002), however, did not compare these specimens with femora of Enaliarctos, or basal odobenids such as Proneotherium and Neotherium (or an unnamed basal odobenid described by Naoki Kohno early on, ~1990). Additionally, now that the putative stem-pinniped Puijila darwini has been described, it's femora should be compared with these specimens as well. These could very well turn out to belong to something more like Enaliarctos or Puijila that we don't yet have a record of in the Atlantic. However these fossils are interpreted, their Late Oligocene occurrence (if the provenance is accurate) is intriguing, and further field investigation of Late Oligocene sedimentary rocks of the Atlantic Coastal Plain (and elsewhere!) should be considered.
References:

Hey folks, I've been rather busy preparing for spring break (which I leave for in about 30ish hours), and I've actually gotten quite a bit accomplished - I finished preparing the whale cranium from the aforementioned post (there will be more follow up posts to that soon), and as of this afternoon, finished the second plaster/fiberglass cradle for the skull, which I will eventually be able to sink bolts through to keep the two halves together. Tommorrow I'll be attaching foam to the inside of the cradles, and then lugging the whole monstrosity to my (rather small) car. However, as this thing now weighs around 100 lbs or so, it is still only 1/3 of its original weight, so my car can do it.

Other than that, I submitted a manuscript this week (late monday night), about bite marks on some bones from the Purisima Formation; you'll hear more about it later on down the line. 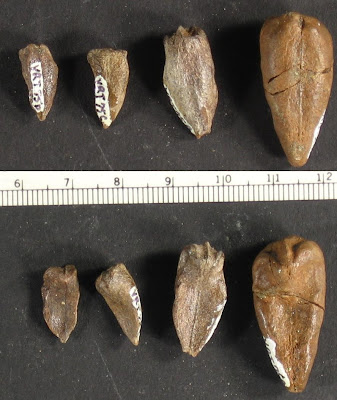 Mystery marine fossils from the Pleistocene.

Anyway, as part of my mental preparation for spring break and looking at marine Pleistocene "rocks", here are some Middle Pleistocene fossils from a marine unit in California. I haven't been able to ID them, but they were originally ID'd by the collector as sea turtle claws. I'm naturally skeptical of that, but I'd like to see what you folks think, or if anyone can come up with something better (or, validate that ID).
Posted by Robert Boessenecker at 9:02 PM 4 comments:

In 2005 I received a permit to collect vertebrate fossils from a locality in the Purisima Formation. This project lasted two summers, and resulted in the collection of dozens of shark teeth and vertebrae, calcified cartilage skate jaws, pinniped bones and teeth, several bird bones, odontocete and mysticete bones, including a handful of tympanics, a complete lower jaw of Herpetocetus, a porpoise cranium, and the big kahuna: a 300+ lb plaster jacket with some sort of mysticete skull inside. I wasn't really sure what it was in the field, although I suspected it was a balaenopterid (i.e. rorqual whale, like a Minke, Humpback, Fin, or Blue whale) on gut feeling alone. 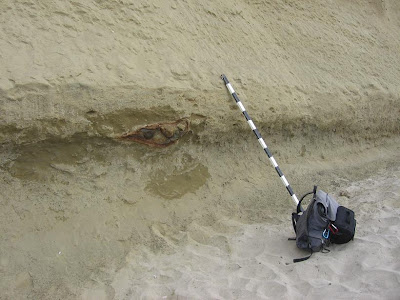 The cranium prior to excavation, June 2005.

I first spotted the skull over thanksgiving break in November, 2004, with a flashlight just after sunset. I thought it was a skull at the time, but hadn't seriously thought about getting a permit yet. After I started the permit application process, I actually forgot entirely about the skull, and hadn't thought seriously about excavating it. When I finally stumbled across it again, I thought "why the hell not?" and up until the last few weeks, I've regretted the decision. Bottom line - I spent five months preparing the soft matrix from the ventral side, and in Spring 2006 I moved it to Museum of the Rockies, where I've been (intermittently, given my school schedule) preparing it with pneumatic airchisels since. 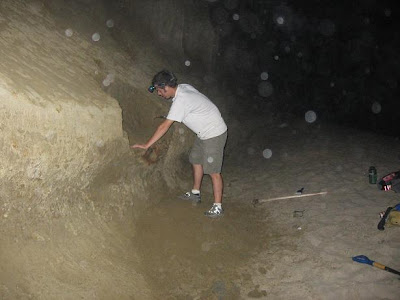 Day 1 of the excavation - we started at 5 in the afternoon, and stopped at about 10pm, digging by lantern, headlamp, and heavy metal.
Four years of preparing it with pneumatic tools - this skull was encased in a ridiculously hard concretion which only gets harder toward the center; concretions from elsewhere in the Purisima Formation are "nice" in that they 1) are of constant hardness throughout, and 2) the rock splits off the bone in these other cases. For this specimen, rock never splits off the bone, and in most cases I've had to prep all but 1-2mm of rock away and then grind it down with the airchisel, so some surfaces have definitely gotten a little scored. No matter, because all the sutures are visible, and it looks pretty nice anyway (unless you look at it with a hand lens). So shoot me; if I'd done it 'better', I'd have another year or two of prepwork to do. As it is, I'm leaving some matrix in the left temporal fossa, and elsewhere. 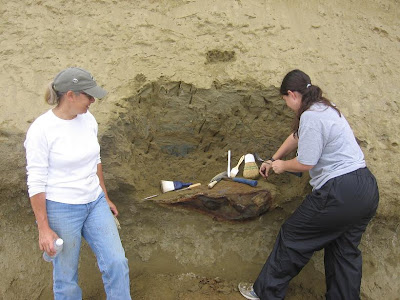 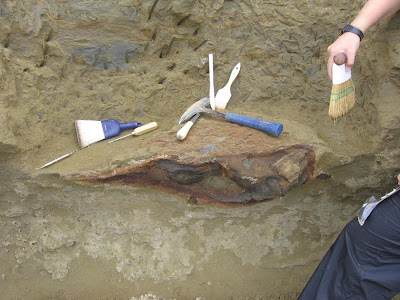 A closeup of the skull, which is upside down. The rostrum is missing, and the vomer is the elongate bone pointing to the left. The frontal is the roughly triangular bone in the middle, the arcuate bone is the lateral crest of the supraoccipital shield, which slightly overhangs the temporal fossae (filled with matrix); the base of the squamosal is preserved at left. 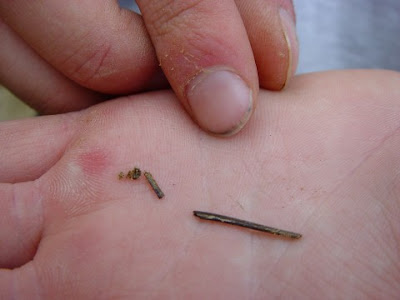 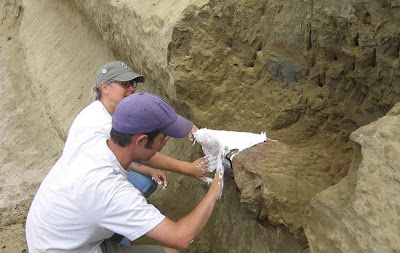 Here Vicki and I are putting the finishing touches on a preliminary jacket to protect some exposed bone. 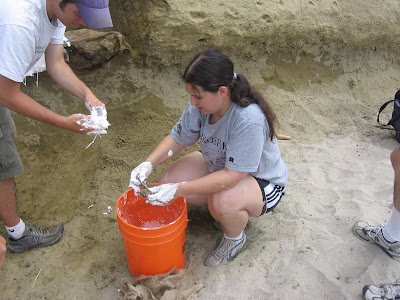 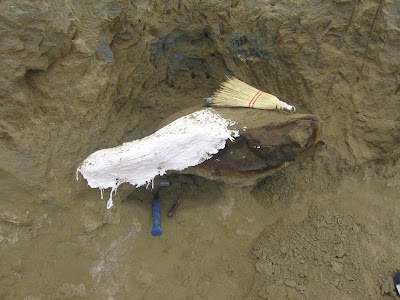 The end of day 3: the skull is now trenched and tunneled under (see rock hammer) and ready for the rest of the plaster jacket to be applied. 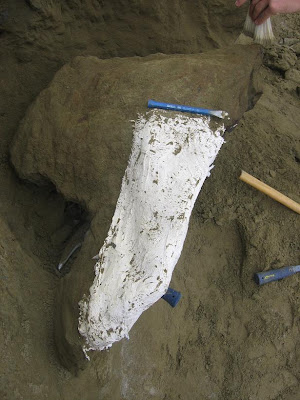 Another view of the skull bearing pedestal after trenching and tunneling. 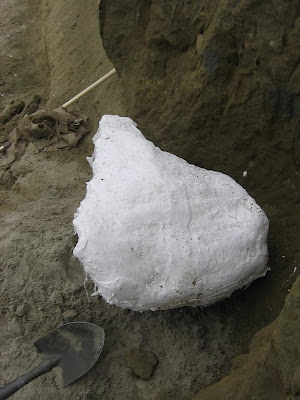 The completed top jacket prior to flipping on Day 4; I didn't have much time to take photos after this.

After the top jacket dried (which took over a day, due to the extremely humid air and my lack of jacketing experience), my temporary field assistant (and friend since 1st grade) Matt Berrini and I used what resources we had, and played 'egyptian' for a while: the ancient egyptians used earth for monument construction. For building pyramids, they built an earthen ramp; for raising obelisks, they had a chamber filled with sand; after the obelisk was raised by ropes, the obelisk was propped up by the sand in the chamber, which was slowly removed, allowing the obelisk to become upright with comparatively little further struggle. So - we built a fairly large 'ramp' of beach sand up to the jacket (as the skull was about 1 meter above the beach) so that the jacket did not break apart and collapse during flipping. In retrospect, the incredible density of the concretion probably indicated we could have probably let it fall anyway (although parts of the bones protruded from the concretion's boundaries, and may have broken).

Anyway, that's all for now, but soon I'll have another post about the prep process, and let you in on the last 5 years of my life.
Posted by Robert Boessenecker at 9:49 PM 3 comments: