A visit to Tunnel Beach

Without a car, it's a bit difficult to make it out of town here in Dunedin. We've made friends with some other folks who own cars, who have been nice enough to invite us on trips out of town. Last fall (spring in the northern hemisphere) our friend Luke, the scientific illustrator in the geology department, took us down to Tunnel Beach southwest of Dunedin. It's a beautiful spot, and famous for its fantastic exposures of the Caversham Sandstone - a pervasively bioturbated, thick, and monotonously bedded middle to outer shelf sandstone deposited during the early Miocene. A few cetaceans have been recovered from the unit, including some kentriodontids studied by my former labmate Gabriel Aguirre-Fernandez, and some other bits. It is generally considered to be coeval with the Mt. Harris Formation, a shaley unit that overlies the late Oligocene Otekaike Limestone further north in the Waitaki river region. 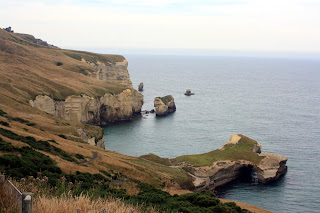 The view back east towards Dunedin and the peninsula from the top of the hill. 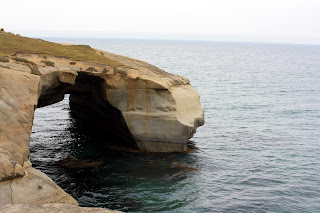 The sea cave at Tunnel Beach. 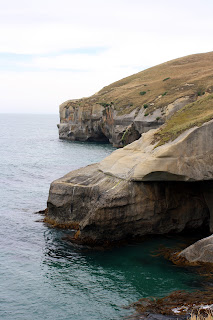 The view west along the cliffs towards Black Head and Brighton. 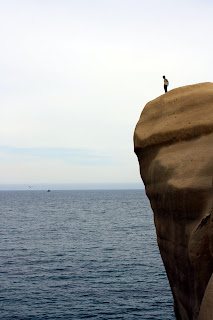 Sarah getting a bit closer to the edge than her mother appreciates. 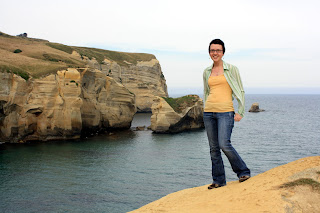 Sarah on the point at Tunnel Beach. 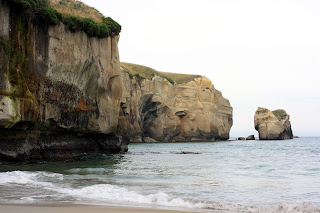 The best wedding gift ever

Back in 2011 my wife and I got married up at Lake Tahoe in California - being paleontologists, we generally have stranger tastes than most folks. Previous birthday presents from my wife Sarah have included skulls of racoons, badgers, and river otters, rock hammers, clam knives, field bags, and others. Sarah's first rock hammer was a birthday gift from me, and I've given her similar presents since. For the purposes of a wedding present, however, she would have been pretty disappointed if I had gotten anything other than something expensive in a tiny box - but she decided to have a little more fun and be a bit more unorthodox about her wedding present for me. 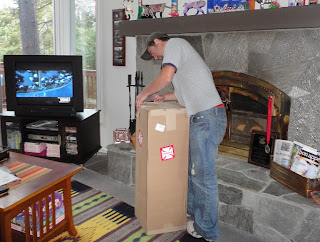 It arrived a few days before the wedding, in a large (and heavy) box. She had been boasting about how awesome the present was, and I suspected it was a skull of some sort. 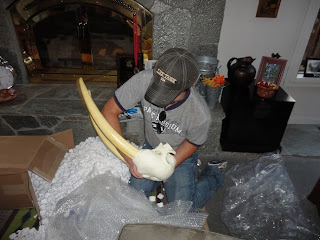 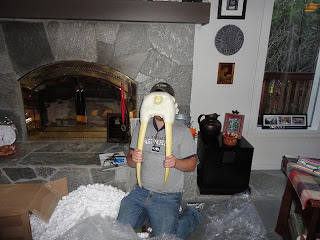 Also, if I had a spirit animal, this would probably be it. She was initially disappointed when she found out it wasn't a complete skull - but to be honest, I'm happier with this as when I get my first office in the US, it will look totally awesome on a wall. Edit: this is a Bone Clones cast.
Posted by Robert Boessenecker at 2:19 AM No comments:

Late last year on the fossil forum (www.thefossilforum.com) where I help identify fossils for amateur collectors, I saw a photo of a pinniped tooth collected by my good friend and Tate Museum preparator JP Cavigelli from the Sharktooth Hill bonebed. It looked like it had a few too many cusps to represent any pinniped other than Pelagiarctos thomasi, so I asked JP to take a few measurements - and sure enough, the tooth is huge, and double the size of the smaller walrus Neotherium mirum. The additional cusps and presence of a cuspate lingual cingulum (cingulum is a ridge of enamel just above the base of the crown, and lingual means the tongue side of the tooth) are unique among walruses to Pelagiarctos and Imagotaria. Imagotaria is far younger (late Miocene, rather than middle Miocene). JP was kind enough to donate the specimen to the Tate museum where he worked, and Morgan Churchill and I actually referred the specimen to Pelagiarctos thomasi in our PLoS article on Pelagiarctos. 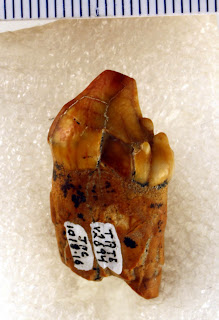 The new specimen of Pelagiarctos thomasi (TATE 2694) collected by J.P. Cavigelli in 2012. Preparator Sophie sculpts a pedestal onto the broken root of the tooth.

Morgan is down here in New Zealand and Australia for a two month EAPSI (East Asia and Pacific Summer Institute) fellowship, with the intent to utilize a statistical analysis to test the phylogenetic position of the problematic Pleistocene sea lion Neophoca palatina from New Zealand. About two months ago my labmate Carolina Loch-Silva suggested Morgan bring a Pelagiarctos tooth with him in order to secure an enamel fragment to examine its enamel structure - possibly as a way to take another stab at the feeding ecology of Pelagiarctos. To recap, Larry Barnes (1988) originally hypothesized Pelagiarctos to be a macrophagous 'killer' walrus, although our reevaluation of the data (Boessenecker and Churchill 2013) suggests that it was a dietary generalist like most modern pinnipeds, including robust sea lions. 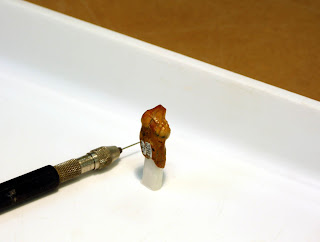 The tooth on its pedestal.

Even though Carolina's sampling method will not remove much of a tooth fragment, I was still interested in molding and casting the specimen. There are less than a dozen teeth of Pelagiarctos in museum collections (many more exist in private hands, which us researchers have to ignore for all intents and purposes), it would be useful to provide casts of the specimen to various west coast museums such as UCMP, LACM, the San Diego NHM, and the Cooper Center; casts of the specimen will also be sent back to the Tate Museum, the Smithsonian, and the National Museum of Nature and Science in Tokyo. 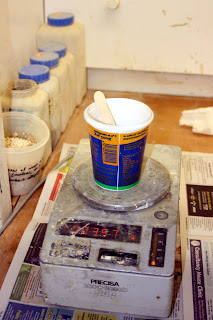 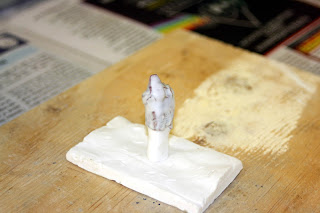 The tooth on its pedestal and base, with a single coat of silicone painted on to capture fine detail. Unfortunately, this coat never cured - we're using somewhat expired silicone, and it can be finicky when it cures, often requiring extra catalyst. We ended up pulling the rubber off and redoing it as a single pour.

For an easy small fossil like a tooth, comparably fewer steps are necessary for molding and casting. Firstly, in order to keep silicone (or latex for that matter) from invading small pores and cracks and pulling out fragments of bone, a consolidant such as vinac or PVB needs to be painted on the specimen. For a small specimen like this, there are three ways to mold it: 1) with latex, paint several layers on to make a sleeve, which can be pulled off the tooth (or cast) and inverted; 2) a two part mold, or 3) a single pour 'plug' mold. For small specimens, my friend and fellow student at MSU Denver Fowler suggested cutting up older latex molds, pouring the fragments in to a film canister, embedding the small fossil within said latex clippings, and then pouring in latex to fill the voids and form a nice plug; after enough casts are made, you recycle the latex and do it again with another specimen. We decided to do a similar single pour mold. Instead of using a film canister, Sophie made a small cylinder of clay as a base, planted it on a flat sheet of clay, and then taped a cylinder of plastic sheet and planted that into the clay to act as a dam. We first tried to paint a layer of silicone onto the tooth to capture fine details, but for whatever reason it never cured properly, so Sophie stripped that layer off and we mixed up some more silicone for a single pour. We ended up having too much silicone mixed up, and asked Ewan if he had anything handy which we could mold, so he gave us a small squalodontid tooth. 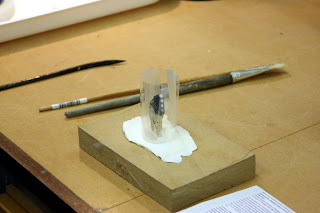 The squalodontid tooth showing the acetate sheet dam. At this stage, once the silicone is mixed, it can be poured directly into the tube. 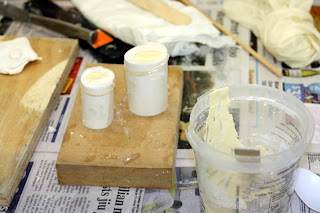 Both plug molds, with dental plaster freshly poured and waiting to cure.

Next up: pouring plaster and resin casts.
Posted by Robert Boessenecker at 3:57 AM No comments: