Odontocete trifecta in the latest issue of Journal of Vertebrate Paleontology


I apologize for the lack of posts over the past month - the last few weeks I have been working furiously in order to complete a long list of manuscript revisions for a long manuscript for the journal Geodiversitas. Additionally, I've been trying to complete a laundry list of collaborations, which are slowly being completed. Now that I have breathing room again, welcome to the 200th post on Coastal Paleo (down under)!

Last week I was pleased to see the publication of not one, not two, but three different papers on cetaceans in the most recent JVP issue. I was also amused by the lamentation by some of my former fellow students from MSU that there weren’t enough dinosaur papers in JVP (one only!). It’s a welcome change, from my perspective – to be honest, roughly half of JVP issues have no marine mammal articles, and the majority have multiple (boooring…) dinosaur papers. To be fair, there are a hell of a lot more dinosaur researchers than there are marine mammal paleontologists, so it’s to be expected. On the other hand, despite the disappointment that comes with scrolling through brand new but marine mammal-less issues of journals, it does come with the upside that we often don’t have to add citations for numerous articles coming out while your manuscript is in review (unless it’s a long article that takes a while for review and revisions; I had a revised article I recently resubmitted which had taken about eight months from submission to completion of revisions, and I had to add citations for about a dozen new articles). 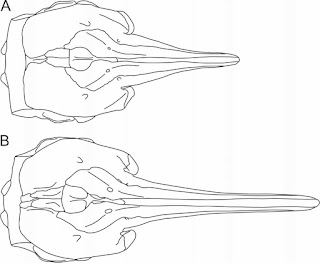 The new studies are published by my colleagues Giovanni Bianucci and Olivier Lambert, and several of their European and South American colleagues. The first paper is by Olivier and prominent French paleocetologist Christian de Muizon on a new species of Brachydelphis from the Pisco Formation of Peru. The genus was named by Muizon (1988) who described Brachydelphis mazeasi, a short-beaked pontoporiid dolphin from the Cerro La Bruja vertebrate level of the Pisco Formation in Peru, a late middle Miocene locality. Pontoporiids today are represented only by the franciscana, aka La Plata River Dolphin, Pontoporia blainvillei. It’s my wife’s favorite cetacean, which she just refers to as “francis”. They don’t really look much like dolphins the public is familiar with – it’s got odd triangular fins and an elongate beak. It’s also tiny, topping out at 1.8 meters in length (5’ for American readers). It’s not quite as freaky looking as the Ganges/Indus river dolphin (Platanista; more on this one further down), or the Amazon river dolphin (Inia), and is actually pretty cute as far as cetaceans go (so is the Yangtze river dolphin, Lipotes). Note for the Californian readers: one of the most common fossil dolphins in California, Parapontoporia, was originally considered to be a franciscana relative, but is most closely likely related to the recently extinct Lipotes. One thing all modern river dolphins share in common, aside from generally plesiomorphic skull morphology, is an elongate and narrow rostrum. Platanista and Inia also retain what are arguably the least homodont dentition of any odontocete; modern river dolphins are sort of a relic of the Miocene fauna. Note: for the rest of the article, when you see the term “river dolphins” in quotes, I’m referring to all modern and fossil platanistids, pontoporiids, iniids, and lipotids; these taxa do not form a natural monophyletic grouping, and appear to have independently evolved (a topic for another post, I think). 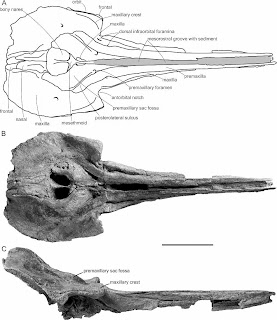 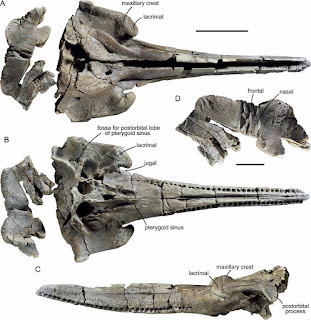 The holotype (top) and paratype (bottom) of Brachydelphis jahuayensis from the
Pisco Formation of Peru. From Lambert and Muizon (2013).

Up until the description of Brachydelphis, all fossil “river dolphins” also shared an elongate rostrum (or, if not complete, the indication of an elongate rostrum) – Pontistes, Pliopontos, Ischyorhynchus, Parapontoporia, Zarhachis, Pomatodelphis, the list goes on and on. Brachydelphis on the other hand bore a tiny little rostrum, to the point where it must have resembled something like a true porpoise with weird flippers. A subsequent study reinterpreted the fragmentary Protophocoena minima from the Miocene of Belgium as a brachydelphinine (Lambert and Post 2005). The new study by Lambert and Muizon (2013) focuses on the description of a new species of Brachydelphis with a less stunted rostrum, and in a way is a bit more normal-looking. The rostrum of Brachydelphis jahuayensis, however, is still quite short relative to other “river dolphins”, and perhaps in that aspect still evocative of the name Brachydelphis. They reported on numerous new skulls which are preserved beautifully. The most fascinating aspect of the paper is the age of Brachydelphis jahuayensis – it’s from the El Jahuay vertebrate level of the Pisco Formation, which is younger than Cerro La Bruja, and thus younger than the shorter-snouted Brachydelphis mazeasi. Assuming an ancestor-descendant relationship (which I consider to be reasonable) between the two, it implies that Brachydelphis first evolved a short rostrum, and was then reversed during the late Miocene. It may not be surprising, as we already know that the cetacean rostrum is a fairly plastic feature that is readily adjusted to changes to feeding ecology (presumably, anyway). I actually was one of the reviewers for this paper, and I’m pleased to see it published. Interestingly, this younger, longer-snouted taxon was preliminarily recognized by Gutstein et al. (2009) from similarly aged strata from the Bahia Inglesa locality in Chile, which Lambert and Muizon (2013) referred to Brachydelphis jahuayensis. 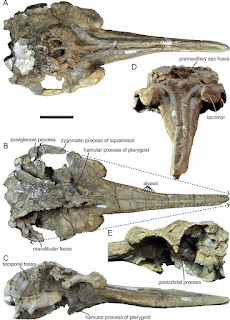 Yet another skull of Brachydelphis jahuayensis. From Lambert and Muizon (2013).

The second paper is by the Italian paleocetologist Giovanni Bianucci on a new genus and species of oceanic dolphin from the Pliocene of Italy, Septidelphis morii. At first look, it is similar in overall proportions to many extant long beaked delphinines such as Stenella longirostris, and other Italian Pliocene delphinids such Etruridelphis giulii and Astadelphis gastaldii. It does differ from all other delphinids in having a fairly wide mesorostral groove, among other subtle features. Bianucci (2013) included it within a limited phylogenetic analysis which he used a molecular tree as a “backbone” constraint – in other words, forcing the extant species on the tree to conform to the molecular tree, and using the morphological characters to position the fossil taxa relative to the extant species. The analysis resulted in the recovery of Astadelphis, Etruridelphis, and Septidelphis as the earliest diverging delphinines, with the exception of extant Sousa chinensis. This information, in concert with molecular divergence dates, led Bianucci (2013) to suggest that perhaps extant genera of delphinids may be nearly lacking entirely in the Pliocene, and that aside from a few cases of extinct species in extant genera (e.g. Orcinus citoniensis), most modern lineages probably did not originate until the Pleistocene. One piece of evidence for this is that the majority of nodes in the molecular phylogeny of extant delphinids occur in the Pleistocene (again, based on molecular divergence dating). To summarize, this suggests perhaps an even more rapid divergence among delphinids than has been previously hypothesized. 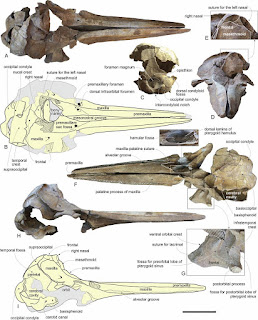 The holotype cranium of Septidelphis. From Bianucci (2013).

The last (and shortest) paper is on a single earbone, also by Giovanni Bianucci, Olivier Lambert, and colleagues. This paper reports a fossil earbone of a platanistine river dolphin – closely related to the modern Ganges River dolphin – from the Amazon river basin in eastern Peru. A Ganges River dolphin relative in South America. How cool is that? It’s also only the second reported platanistine fossil ever – the first is an admittedly less convincing chunk of mandible from the early Miocene Nye Mudstone of Oregon. This new earbone is fairly strange looking (a requirement for a platanistine, to be honest), with a long and strangely curved anterior process. It shares several feature with modern Platanista. This specimen is middle Miocene in age, and indicates that platanistines used to inhabit South America. One of the more interesting aspects of this earbone is where it was preserved, environment wise: it’s found with a number of terrestrial mammals, and occurs in fluvial-lacustrine deposits with occasional marine influence. Fossils of freshwater cetaceans are notoriously rare, and include some eurhinodelphinids material from Australia (Fordyce, 1983; possibly platanistoid, according to research presented by Erich Fitzgerald at the 2010 SVP meeting), Ischyorhynchus from South America (Cozzuol, 2010) and some Pomatodelphis material from Florida. Bianucci et al. (2013) proposed the following sequence of events in the biogeographic history of Platanista: platanistines evolved in the Pacific as primarily marine odontocetes, with some becoming adapted to freshwater environments of the Amazon basin during the middle Miocene, and finally dispersing and adapting to freshwater environments of southern Asia (Platanista), with all other platanistines (as yet unknown) becoming extinct. Interestingly, where the platanistine fossil occurs is now inhabited by the Amazon river dolphin, Inia geofrrensis. Bianucci et al. (2013) also noted that an odontocete historically regarded as an iniid, Ischyorhynchus, was recovered as the sister taxon to Platanista in the Geisler et al. (2012) cladistic analysis. Further analysis is required to be sure, as many taxa jump around depending upon the type of analysis and changes in coding, but it is a tantalizing possibility that two platanistines may have been in Miocene rivers of South America. Lambert, O., and Muizon, C. de. 2013. A new long-snouted species of the Miocene pontoporiid dolphin Brachydephis and a review of the Mio-Pliocene marine mammal levels in the Sacaco Basin, Peru. Journal of Vertebrate Paleontology 33:709-721.