Last week, Marcus came in from four days of fieldwork in the Naseby Greensand, and started lugging in box after box and bag after bag of fossils and sediment. He seemed pretty excited - unusually excited considering he had just returned (normally I'd be a bit tired and would need some recovery time at home), and he proclaimed that he had collected a bunch more shark teeth and a penguin skeleton. 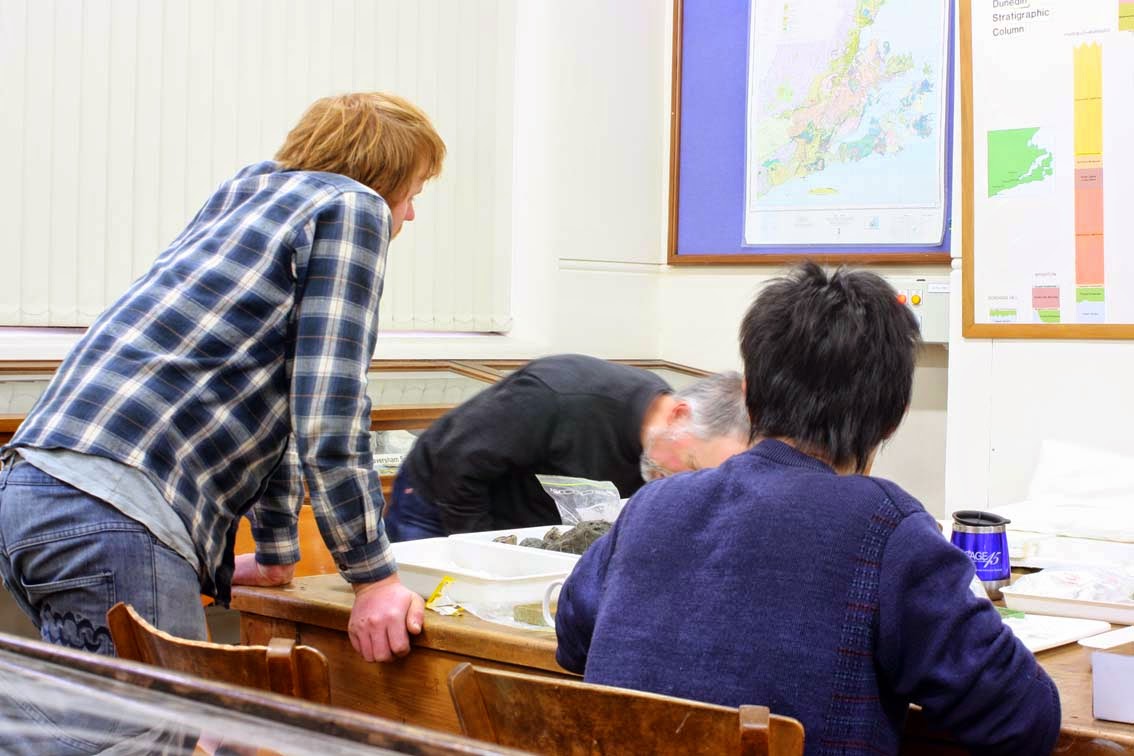 After a couple of hours, Marcus had laid most of his finds on a number of trays on the museum table. Here, Marcus, Ewan, and Tsai examine Naseby specimens at tea time. 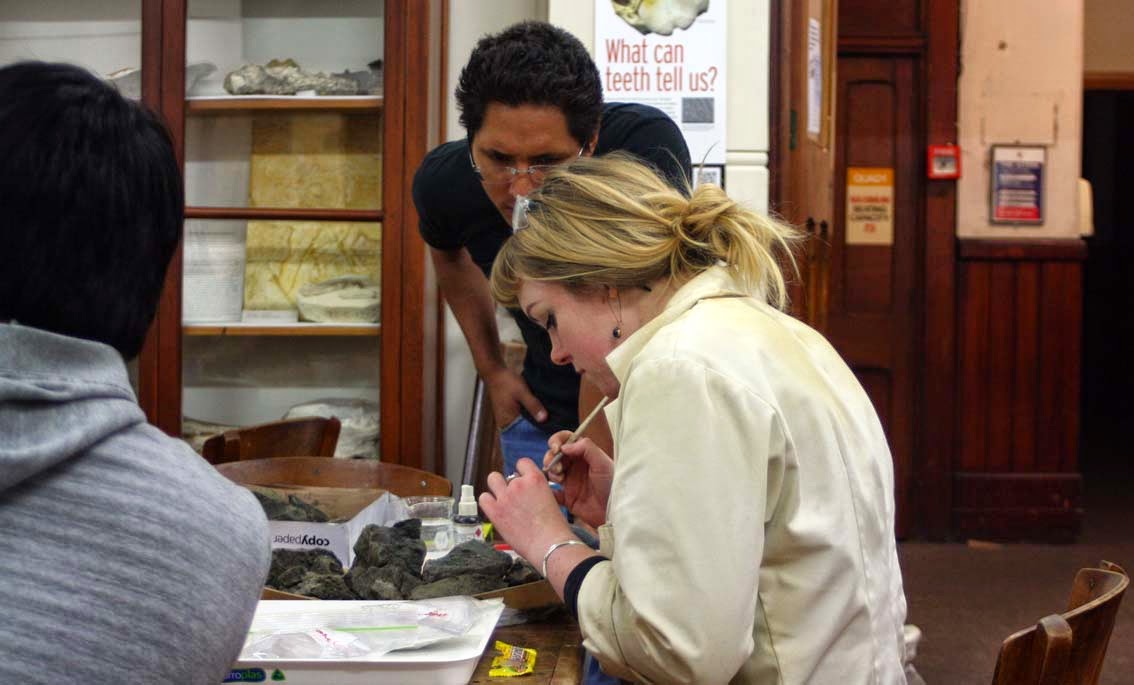 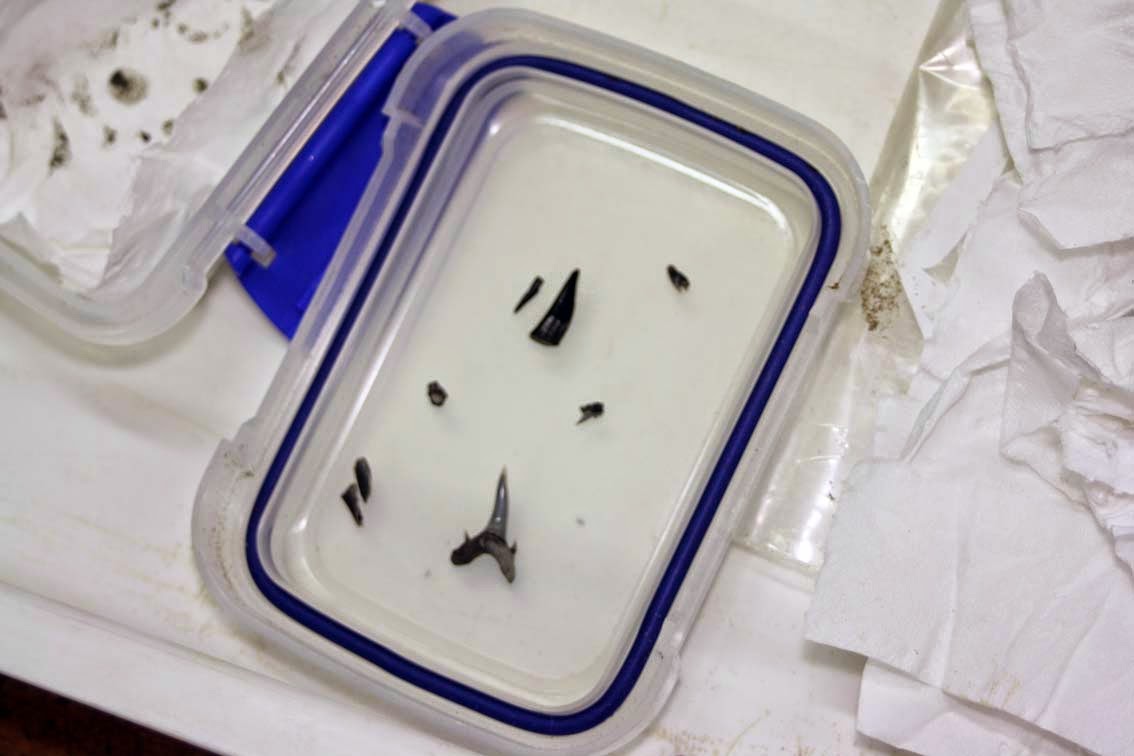 Some of Marcus' shark and fish teeth - an odontaspid sand tiger (big tooth with cusplets) and a possible cutlass fish, Trichiurus (large black triangular tooth). This photo is horribly out of focus, but I did not want to ask Marcus to take out all of his specimens again just for a marginally better photo. 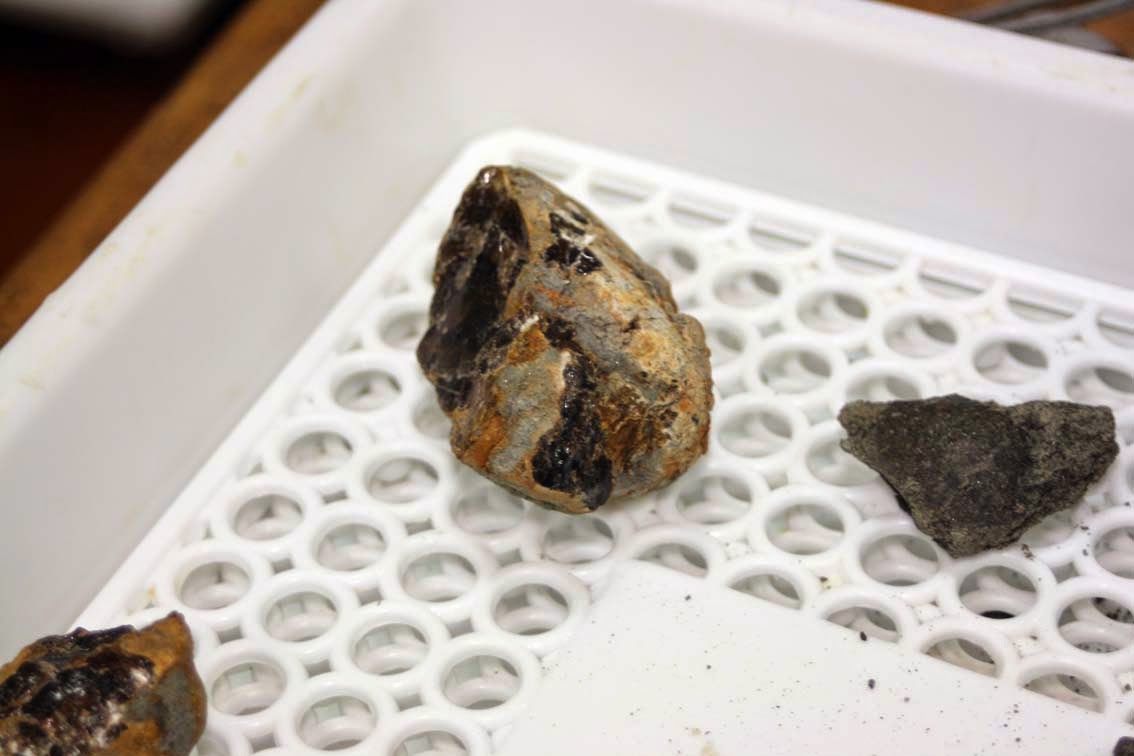 Marcus also brought back some rather large chunks of amber - on the previous visit I found a smallish piece about the size of a large corn kernel (my first piece of amber ever!); this one was about the size of a donut hole. Amber, for the uninitiated, is fossilized tree sap/resin. 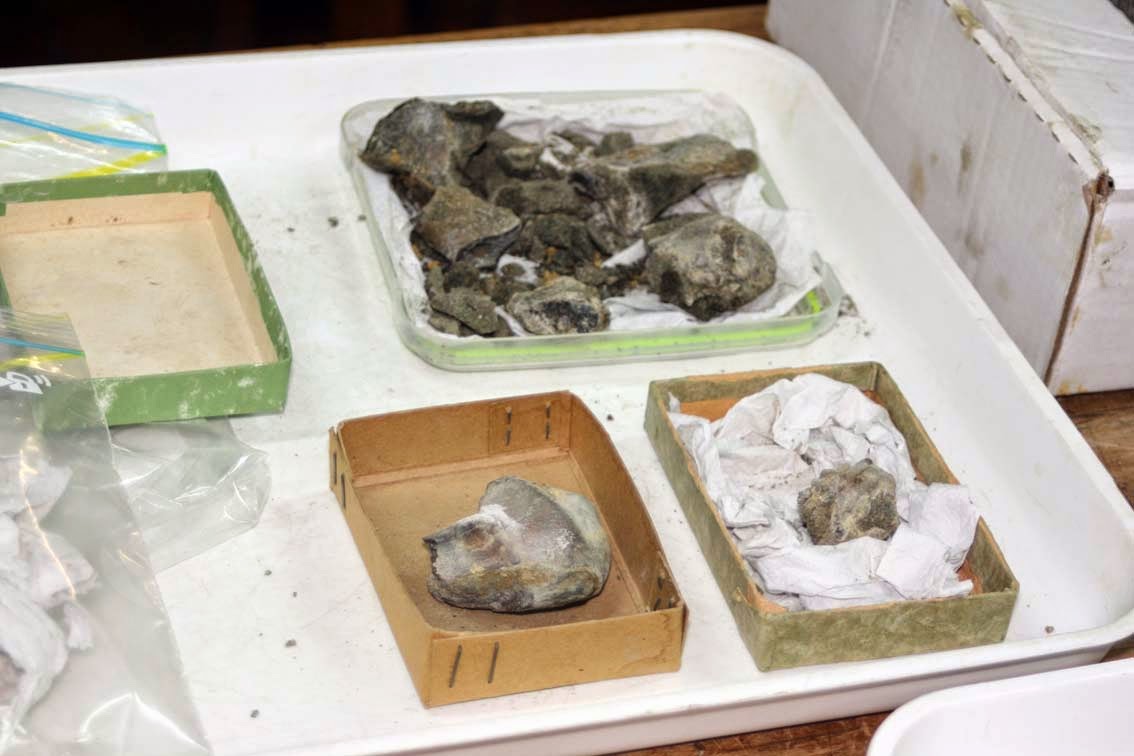 Chunks o' penguin - at least two humeri, a partial tibiotarsus, an ulna, pedal phalanges, and a half dozen vertebrae or so are represented. 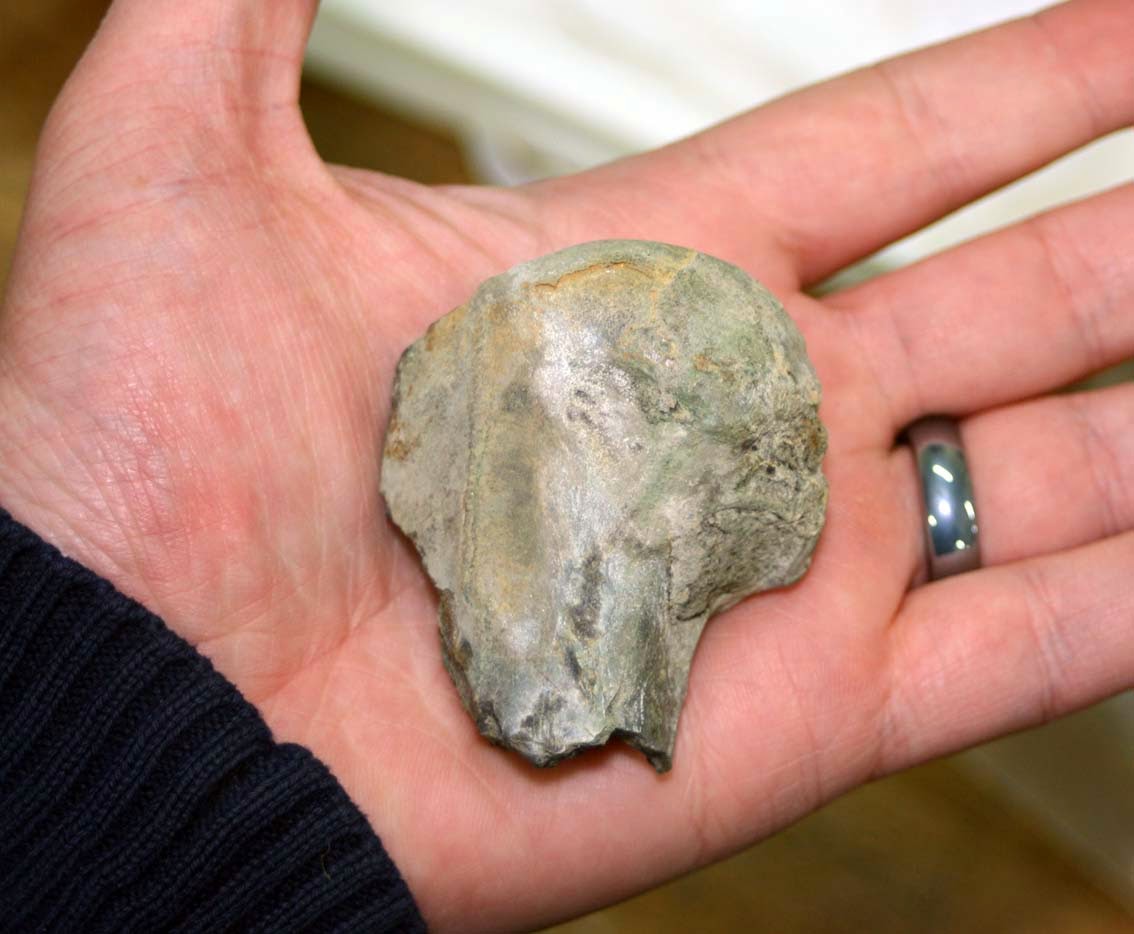 Here's the proximal end of the left humerus - as you can see, this is a pretty damn big bird. This humerus is pretty incomplete... 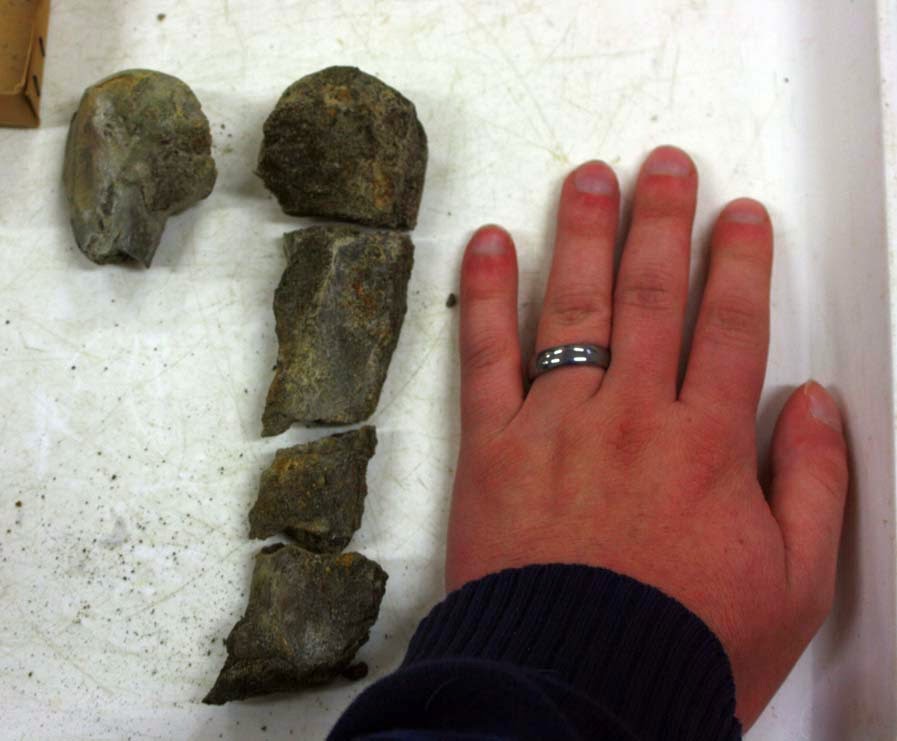 ...but the other humerus is virtually complete. The right humerus is in several pieces, but can be easily glued back together once dried. Provisionally speaking, this humerus is similar in size and morphology to the recently described giant penguin Kairuku, but obviously preparation is necessary to tell for sure. 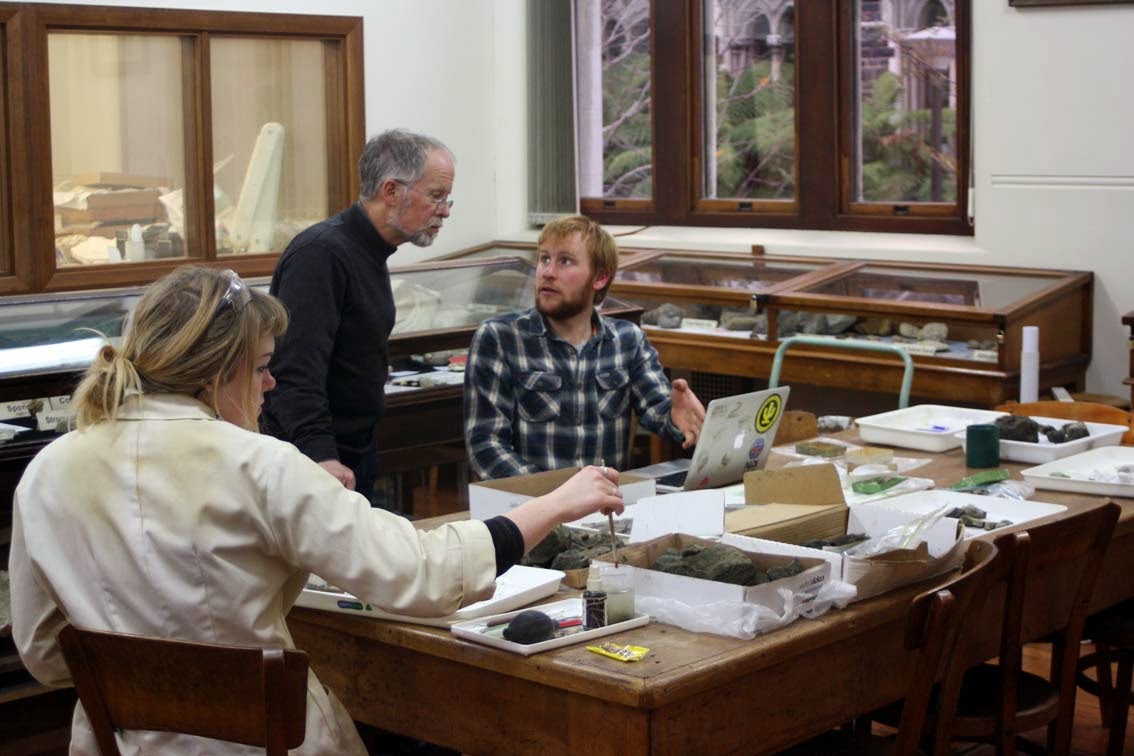 Marcus and Ewan discussing the weekend's bounty, and Sophie determining the best course of preparation for the material. Marcus is thinking seriously about continuing this project into a Master's project and describing the vertebrate assemblage; he's got his work cut out for him! It reminds me quite a bit of my first research project - going to a virtually unstudied exposure of the Purisima Formation in California, collecting every vertebrate fossil, and publishing (nearly) every specimen. The best part is that Marcus was still unsatisfied with this rather large haul, and went out last weekend and brought back even more shark teeth, and found a phosphatic tooth-rich bonebed horizon that is fairly densely fossiliferous. We may be going on a field trip there next week sometime.

Posted by Robert Boessenecker at 7:39 PM