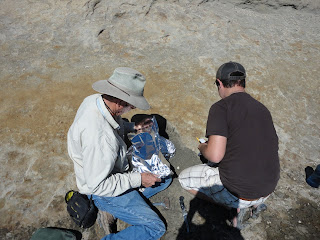 Dick Hilton and I excavating a pair of fur seal (Thalassoleon) dentaries from the base of the cliff. 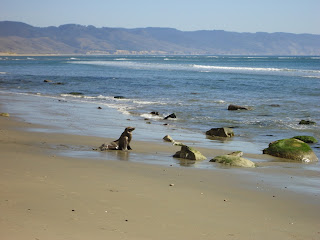 A famished yearling California Sea Lion on the beach.
The weekend before the annual meeting of the Society of Vertebrate Paleontology in Las Vegas, my wife and I joined Dick Hilton from Sierra College for what we assumed would be a routine visit to the Purisima Formation at Point Reyes. We drove up on a Friday night, and cooked hot dogs at the campground with Dick, and set up our tent for the weekend. The following morning, we set out along the shoreline, and within five minutes, found what appeared to be a pinniped skeleton. Since we wanted to get on to more prosperous localities further down, we left it there with the intention of digging it up the following day (Sunday). 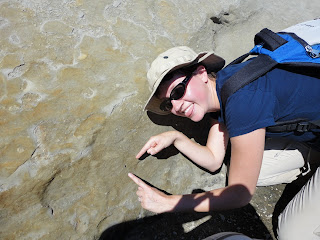 My wife pointing to something tiny she is proud of finding... 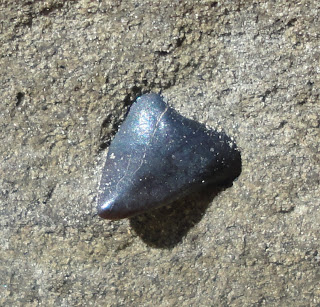 It's a beautiful fur seal (Thalassoleon) molar! She has a real eye for finding things like tiny pinniped and shark teeth, which is why I keep her around. 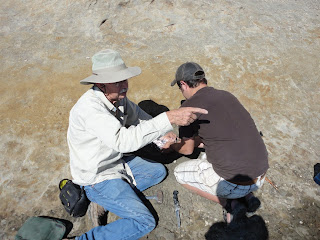 Dick Hilton trying to explain something to my wife and I. At least I hope he was talking to my wife, because it sure looks like I wasn't paying attention.
As we headed further on down to the good section of shoreline, I found a well preserved porpoise earbone (petrosal), and a few other odds and ends. Not too long afterward, and nearly at the same time, Dick spotted a couple bones eroding out with an associated tooth, and my wife spotted a well preserved fur seal tooth (Thalassoleon), only a few meters away. It took us the better part of an hour to dig the bones up – which turned out to be a pair of associated fur seal dentaries! Unfortunately, neither specimen had any cheek teeth, but one did have a broken canine. Either way, only the middle chunk of the dentary is preserved in the holotype of Thalassoleon macnallyae (from the same locality), and these are the most complete and well preserved jaws of this taxon now known. We hiked down the beach a little further, and collected a couple of pinniped limb elements – a proximal end of a tibia, and a metatarsal. After collecting these, we headed back towards the cars. On our way back, I spotted a string of a dozen articulated pinniped vertebrae – a second skeleton we would have to excavate the following day. 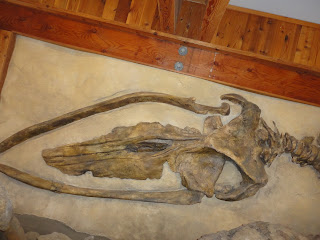 A cast of the holotype skeleton of Parabalaenoptera baulinensis on display at the visitor center. 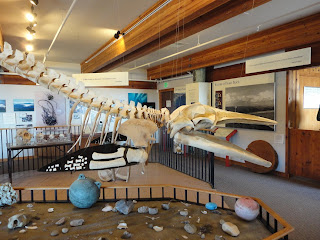 For comparison, there is also a skeleton of an adorably tiny (~15 feet long) minke whale (Balaenoptera acutorostrata) on display as well. 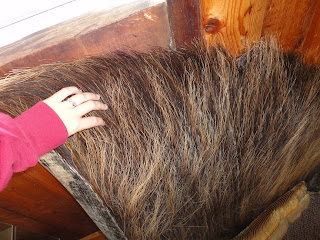 My wife examining some baleen (presumably from a balaenopterid) at the visitor center.

We also finally had a chance to visit the visitor’s center; previously, I had always been there on a weekday, when the center was closed. I was particularly excited to check it out because it has one of the only known casts of the holotype skeleton of Parabalaenoptera baulinensis (which was excavated from the Santa Cruz Mudstone at a nearby locality) on display – there is one other, but it is at the College of Marin in Kentfield, and is falling apart and badly needing repairs. 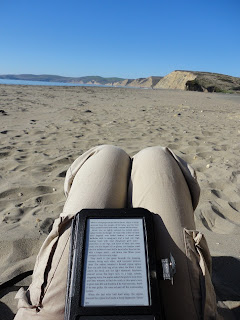 My wife decided she was done, and decided to spend the day reading A Game of Thrones on the beach and napping and taunting birds all day.

On the second day, we spent about seven hours excavating the first pinniped skeleton, which resulted in about 100 pounds of tin-foil jackets. This skeleton is probably of a large fur seal or small walrus, and the skeleton was completely disarticulated; as soon as we were close to removing one bone, another would be under it, or behind it. There were probably about two dozen or so bones in the cliff that we excavated. At about 4 in the afternoon, we wrapped up the first excavation, and walked down the beach to relocate the articulated skeleton. It took a while to relocate it, but as soon as we did, we started excavating it in a large block. Thanks to the specimen being articulated, we were able to finish this excavation in a little over an hour. Once we got back to the car, we loaded up nearly two hundred pounds of fossils we had collected in only two days in the field; furthermore, the most ridiculous aspect of the weekend was that by weight, cetacean fossils comprised less than 1% of our haul (only one specimen). For the uninitiated – pinniped fossils are relatively rare, and my master’s thesis sample of specimens indicates that there is a 4:1 ratio of cetacean fossils to pinnipeds, and that pinnipeds constitute only 8% of the marine vertebrate assemblage from the Purisima Formation at Santa Cruz. To collect a pair of associated dentaries, a tooth, a couple of associated hindlimb bones, and two skeletons (one being articulated) all in one weekend – is surprising, and tripled the number of major pinniped finds I’ve made. I’ll post some updates when some of this material gets prepared. 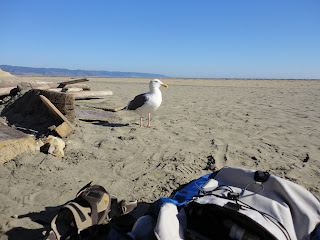 She nearly got this gull to come to her backpack. Sorry, no pictures of the pinniped excavation.
Posted by Robert Boessenecker at 1:52 PM No comments: