Note: I feel like I've been doing this a lot recently, but sorry for the long lapse in posts. I just got back from SVP a week ago, and I've been sick during most of the intervening time. Before SVP, I was working like a fiend trying to get work done for a couple of presentations at SVP, and doing even more fieldwork in Marin County. I'll get some more blog work done now that things have calmed down.

Last August I had the fortune of excavating a Pliocene mysticete skull from one of my fossil localities in the Purisima Formation. I actually discovered this skull back in 2005, but had already found another that I preferred to excavate instead. I went ahead and excavated that other specimen instead, and left this one here. There were several reasons why I left this one alone. First, the other specimen was much closer to where we could park, whereas it was a mile walk to the skull featured below. Secondly, I only had the funds (and space in my small car) for one large plaster jacket, so this one had to wait. 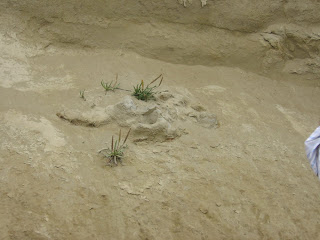 The skull as it appeared prior to excavation, and in a basically identical
state at the time of discovery in 2005.
My permit for the locality was good for another year, so why didn't I collect it in 2006? Well, I was still preparing the 2005 whale (which I would be preparing for another four more years), and there wasn't lab space available for it. So my 2006 permit expired, and I didn't get another one until last fall. To be honest, I hadn't intended on collecting it this year either because I had no funding, no crew, and no vehicle to remove it with. One day a well known "personality" posted a question about fossil whales in concretions on the shores of some of the Channel Islands, and he was legitimately surprised by how many whales there are out there languishing, despite the number of able bodied vertebrate paleontologists in southern CA. I went on a bit of a rant and explained that it's the rule rather than the exception with regards to California fossil whales: there are uncollected bones and concretions littering Northern and Central California beaches, just asking to be put into a museum. I didn't think much of my email, until I got an email from Dr. Desmond Maxwell at University of the Pacific in Stockton, who explained that he had grown tired of taking his field crews all the way to Utah and Montana, and wanted some local prospects, and that he had plenty of funding, volunteers, and lab space for large marine mammal fossils. I gladly took him up on his offer, and this whale excavation was the "maiden voyage" of our field/lab collaboration. 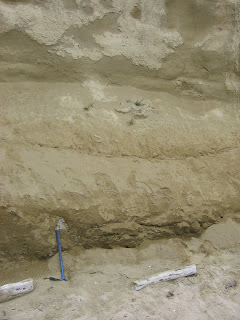 The fossil, with estwing superpick for scale.

We arrived on the Thursday of the last week of August, with the intention of spending four days on the excavation. I met Des early in the morning at his hotel, and we drove out to the coast. The first day felt like two, both in terms of how much rock we went through and how long it was. The skull was in a concretion about ten feet up off the sand, and fortunately, had not been eroded at all since I found it in 2005 - at this locality, erosion is particularly slow, and the cliff erodes inch by inch, instead of being cut at the base and having blocks fall down, like at Capitola. Fossils that are over ten feet above the base of the cliff erode very slowly - a large baleen whale vertebra at another locality had the tip of its neural arch exposed in summer 2004, and as of October 2011, one half of the ventral side of the centrum is left (body of the vertebra). 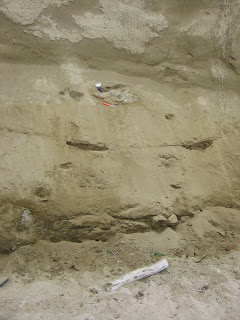 Footholds cut into place for the excavation.

The first order of business was to cut footholds and ledges for us to stand on. Unlike the 2005 baleen whale excavation, the sandstone was very soft and friable; its height above the base of the cliff meant it spends more time out of the year being weathered and not waterlogged by high tides one half of the year. This made the excavation on the first day go remarkably fast. 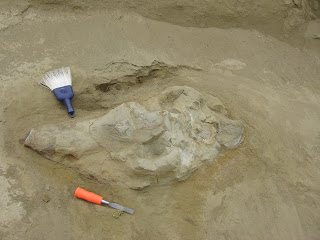 Initial excavation of the skull, and cleaning of the exposed surfaces.

There were also several plants growing in the concretion, which we quickly plucked and removed. Fortunately, the roots did not penetrate the bone and destroy it, which has happened in some cases. After some early cleaning, it was apparent that the concretion was very thin over some parts of the skull, which would make life considerably easier than the previously excavated whale from this locality. 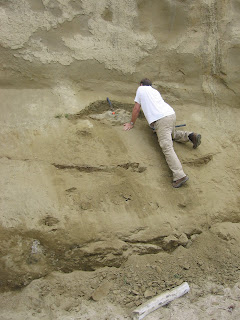 What exactly was it? It's convenient to just throw around the term 'whale' because it's huge, and you're not really quite sure. Well, initially I identified it as a right whale (balaenid), because I thought that the skull shape was consistent with that - wide braincase with a supraoccipital shield that did not extend very far forward. A few weeks later, I looked at more pictures of right whales, and I'm no longer too convinced my ID was accurate by any stretch of the imagination. Right whales have 'backswept' squamosals, and whatever this thing is, it's squamosals (it is sadly missing the lateral extremities of them) are relatively close to the vertex (top of the skull). More likely, it is a primitive balaenopterid with a short supraoccipital shield: the squamosals of balaenopterids are closer to the vertex than in balaenids, and are oriented laterally (not posterolaterally). Another possibility is that it could belong to a balaenopterid-like gray whale, which is known from the Pliocene San Diego Formation. 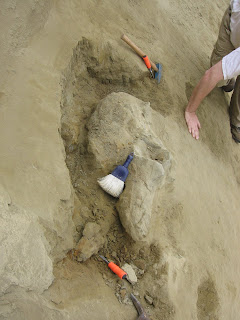 The skull after the first day of work. Not much appears obvious, but I'll talk more about it in the next installment.
Posted by Robert Boessenecker at 8:14 PM No comments:

Update: The coastal paleontologist gets married, and goes down under?

The last couple of weeks have been pretty great, and due to being so busy in relation to recent events, I've been a little slow on posting new material on here. First and foremost, I got married to my longtime girlfriend/fiancee Sarah Michalies on September 17 up at beautiful Lake Tahoe, California. The wedding was fantastic, and a lot of fun - and there were many paleontology students from around North America in attendance. Sarah and I have been together since spring 2005, and it was about time to tie the knot. Sarah and I met as undergraduates in the paleontology program at Montana State University, and have gone on all sorts of paleo field trips together. 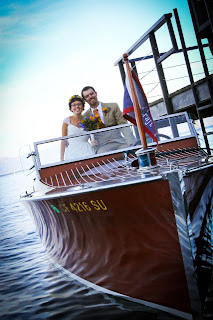 This is not our boat, we just borrowed it for cool pictures.
The second awesome thing that happened - I was recently (i.e. on Thursday) accepted into the Doctoral program at the University of Otago in New Zealand. I applied back in late July, and the plan is to start in January. I have the fantastic opportunity to work with Dr. R. Ewan Fordyce, who has offered me a chance to study eomysticetid fossils from the south island of New Zealand. Eomysticetids are a thus far poorly known group of early baleen whales, and constitute the earliest known and earliest diverging toothless baleen whales. So far, the only eomysticetids that have been described include Eomysticetus whitmorei and Eomysticetus carolinensis from the Oligocene of South Carolina, described by Larry Barnes and Al Sanders in 2002 in the Clayton Ray memorial volume. However, in that same volume, Barnes and Sanders name another new family of early diverging mysticetes they term the Micromysticetidae; they remove Cetotheriopsis tobieni from said genus and place it in the new genus Micromysticetus, to which they also name a new species from South Carolina, Cetotheriopsis rothauseni. This family also includes the taxon Cetotheriopsis lintianus. Anyway, Micromysticetus has almost always occurred as a sister taxon to Eomysticetus wherever included in phylogenetic analyses, and I would not be surprised if the Eomysticetidae were to include these even smaller taxa. 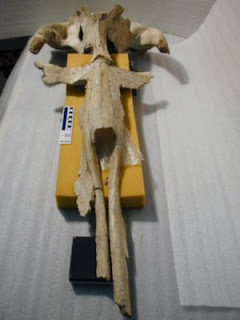 The new material from New Zealand includes a collection of eight partial and complete crania, many with dentaries, earbones, and postcrania. In addition, two species of Mauicetus may be referable to the Eomysticetidae, and part of this project will revolve around trying to ascertain whether any of these new specimens represents referable material of Mauicetus; the skulls of the two holotypes of two Mauicetus species (not including Mauicetus parki, which is not an eomysticetid) are very incomplete or have been lost, but are still known from some earbones and postcrania (and photos of the skulls). One of my tasks will almost certainly be to determine whether or not any of this new material could be designated as a neotype specimen. 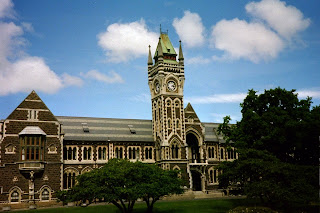 The clocktower at University of Otago.
All of that interesting paleocetaceanology aside, Sarah and I are going to New Zealand!!! We'll be living in the city of Dunedin on the south island. Above you can see a photo of the clock tower at the university; the campus there looks absolutely beautiful. Granted, Traphagen Hall at MSU Bozeman is a neat old building (but totally shitty inside), but I've seen photos of the Geology Building at OU, and it looks just like another Tudor stone castle like the main building pictured above. It looks totally awesome. Furthermore, unlike my previous 8 years of schooling in Montana, it doesn't get anywhere near as cold on the south island (although Dunedin is about as far south as you can get on the south island). And lastly, there are penguins that live there! There are penguins that have rookeries on the Otago Peninsula, within a 30 minute drive from campus! Blue/Fairy penguins, the smallest known species of penguin!

This is going to be a blast, and I have a lot of work to do to get there.
Posted by Robert Boessenecker at 12:32 PM 5 comments: