Reflections on the 2013 Society of Vertebrate Paleontology Conference in Los Angeles, California


I’ve been back in New Zealand now for a week since my month-long trip to the US ended. The primary purpose of the trip was to present some of my dissertation research at the SVP conference (Society of Vertebrate Paleontology) in Los Angeles. This was my ninth (!) meeting, and my seventh time presenting research.

The day before the conference, I drove down from San Francisco with my labmate Cheng-Hsiu Tsai, who had been staying with me at my parents’ house. It’s about a 5 hour drive to downtown LA, and with stopping time included, we did it in about 6 – and got stuck in traffic on the 110 freeway shortly after turning off I-5; fortunately we only had to go for a couple miles to get to the Westin Bonaventure. Several years ago I decided never to stay outside the host hotel, unless there was a cheaper hotel literally next door – a situation I took advantage of at the 2010 Pittsburg meeting. The Westin Bonaventure hotel is pretty huge, and one of my first impressions upon entering was a number of movie and TV show posters – apparently several movies including Rain Man, Heat, and True Lies were filmed there – including the huge shoot out following the bank heist in Heat (where the Val Kilmer and Dennis Haysbert characters get shot). The conference hotel was great, although because of the circular shape and symmetry of the lobby, it had a pretty confusing and difficult to learn layout.

The first few days of the conference, as normal, didn’t have a whole lot of talks I wanted to see, so I spent quite a bit of time networking with colleagues, meeting with coauthors and potential future collaborators, and catching up with old friends. Notable non-marine mammal talks and posters included a great talk by Jim Parham (CSU Fullerton/Cooper Center) on fossil leatherback sea turtles (Dermochelyidae) and a related poster by Katrina Awalt. Dan Ksepka gave a talk on new sea birds from the late Oligocene of South Carolina, including a gigantic new pelagornithid (bony toothed bird). Dan even came up to me and jokingly apologized in advance; currently, the largest known flying bird from North America is the Pelagornis sp. specimen I reported on with N. Adam Smith in JVP in 2011, and this South Carolina specimen is slightly larger, and will unseat my specimen from the record. N. Adam Smith and a student of Dan’s had posters on osteohistology of modern and fossil flightless birds including penguins and the extinct flightless auk Mancalla (a subject I am increasingly more interested in for studying fossil marine mammals). Gabe Santos (Cooper Center) had a great poster on the taphonomy of the Eocene Talega Bonebed, a terrestrial mammal accumulation that is slowly being prepared by folks at the Cooper Center. Former Otago student (now at Ashoro Museum of Paleontology in Hokkaido, Japan) Tatsuro Ando presented a fascinating poster on the phylogenetic relationships of the extinct flightless plotopterid birds, and whether or not they were closely related to penguins as was recently proposed by Gerald Mayr. 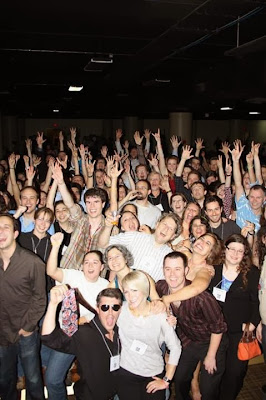 Okay, this is out of order, but all of the photos I'm in were from the last night of the meeting. As usual, numerous Montana State kids are up in the front of the annual party photo... I promise, we actually do get some science done during this meeting! Photo courtesy Rebecca Hunt-Foster.

The first morning of the conference had a symposium on dinosaur ontogeny, organized and moderated by my good buddies at MSU Denver Fowler and John Scannella. Ontogeny is a subject that the paleontologists and numerous students at my alma mater Montana State University and Museum of the Rockies are fanatics about – as well they should – ontogenetic variation in skeletal morphology is seriously underappreciated in vertebrate paleontology. The poor understanding, and perhaps widespread ignorance of ontogeny has resulted in an over-proliferation of genera and species in dinosaur paleontology (for example, Triceratops-Torosaurus synonymy, and Dracorex-Stygimoloch-Pachycephalosaurus synonymy). It’s unclear how much this affects my own field; mammalian paleontologists have generally had less of a problem embracing ontogenetic changes, and with good reason: mammals only get a single set of adult teeth, and are relatively easy to group individuals of different ontogenetic stages together into concrete morphotypes. Cetaceans, on the other hand, attain immense sizes and their skulls change shape quite a bit; cetaceans either lack teeth altogether or have teeth that are so simplified as to be nearly completely useless for purposes of identification. So, there are perhaps a few parallels with dinosaur paleontology as far as ontogeny being problematic, and has almost certainly resulted in too many cetacean genera and species. To wrap this up, I was pretty interested in seeing some of these talks in order for some good perspectives on ontogeny, and also because many of the speakers were close friends (Denver Fowler, Cary Woodruff, John Scannella, Holly Woodward, and Sara Werning) or former professors of mine (Jack Horner, and David Varricchio – who ended up not being able to attend the meeting), in addition to UCMP curator Mark Goodwin. We heard some fascinating stuff about heterochrony in the Triceratops lineage, vertebral ontogeny in sauropods, pachycephalosaur ontogeny, growth and maturation in Maiasaura, and ontogenetic implications for the K/Pg extinction.

On the third night of the conference, Ewan nominated me (again) to round up people for the annual marine mammal paleo dinner. We ended up with about 30 people, and had a great time at California Pizza Kitchen; I got my check early and hoofed it back to the host hotel before the silent auction finished up. My prints didn’t make quite as much as I had hoped, but we’ll see what happens next year. After, I spent a few hours at the bar, and at 1am I realized I had only practiced my talk once before – at UCMP – where Kevin Padian, Pat Holroyd, and various students (including visiting Harvard student Anjan Bullar) gave me some great ideas for how to shorten the powerpoint. So, I grabbed a couple friends – my very close friends Alida Bailleul (MOR) and Jade Simon (MSU), and my buddy and coauthor Joe El Adli (formerly SDNHM, now U. Michigan) – and gave my talk at 1am out on the pool deck behind the bar. And I nailed it! It went great. I practiced it again the next morning to John and Kari Scannella; John is normally pretty critical (and constructive at that), but didn’t really have much to ask.

The marine mammal session had a number of great talks. Erich Fitzgerald gave a talk reevaluating some scrappy phocid remains from the Beaumaris locality in Australia as well as a phocid braincase from New Zealand. Former San Diego State student (Berta lab) Sarah Kienle gave a talk on feeding ecology in pinnipeds, and Morgan Churchill gave a pretty interesting talk on tooth spacing in pinnipeds and whether or not Enaliarctos (the dawn seal) was truly a pierce feeder. Mark Clementz gave a talk on sirenian isotopes, and Daryl Domning gave an interesting presentation on the Metaxytherium sea cow lineage. Cetacean presentations included talks by my labmate Cheng Hsiu Tsai on mysticete phylogeny, a presentation by Ewan on tusked dolphins from the Oligocene of New Zealand, a talk by Olivier Lambert on squalodontids from Peru, and a last minute presentation by Rachel Racicot on odontocete inner ears. Phil Gingerich also spoke about sirenian and cetacean faunas from the Fayum. I also gave my own presentation which went over pretty well, on some of my dissertation research focusing on a new eomysticetid taxon represented by an adult and juveniles of different sizes, preserving the first known ontogenetic series for an archaic mysticete.

Jack and I after the banquet. Jack has tolerated six or seven years of my weird
marine mammal shenanigans. Photo courtesy Alessandro Carpana.

Although the marine mammal session is always the highlight of the meeting for me, there was one special event left. At the awards banquet, my former professor Jack Horner was given the Romer-Simpson Medal, the highest award given by SVP. Jack gave a great little talk with a short biography (with all sorts of great old photos from the 60’s and 70’s I’ve only seen once or twice before), and actually spent most of it talking about how proud he was of his various students. I took several courses from Jack, and spent an inordinate amount of time over at Museum of the Rockies using the preparation laboratory; Jack gave me permission back in 2005 to start lugging in fossil marine mammals in ridiculously hard concretions, as MOR had the only pneumatic air tools I could have access to. My undergrad adviser, David Varricchio, was Jack’s first graduate student, and owing to Jack’s teaching – and all the time spent talking about paleontological theory with his students (or just getting “merry”) – Denver Fowler, Liz Freedman, John Scannella, Holly Woodward, Laura Wilson, Cary Woodruff, Alida Bailleul, and others – I’m very much in a similar frame of mind and have had the fortune to apply my unique MSU/MOR perspective on vertebrate paleontology to fossil marine mammals. Because of this academic heritage, I was pretty damn proud to be a part of the (rather enormous) group photo of Jack and Mark Goodwin with all of his students on the stage after the banquet. Up there with me were pretty much all of my best friends from Montana, and I am so damn proud to have graduated from that unique group of stellar thinkers. 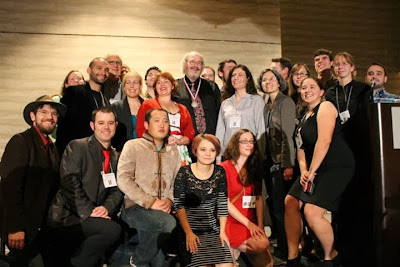 To wrap it up, I guess I’d say that this meeting was one of the more productive, and definitely the most fun I’ve ever had at SVP. Knowing that I probably will not have a chance to go to the 2014 meeting in Berlin (and even if I did, many close friends will not), I knew this would be my last chance to see quite a few old friends from my Montana days, and I made a point of putting a stop to “talking shop” after the poster sessions ended, and spending the evenings with old friends. It was a great time, and I feel extremely fortunate to have been able to see any of them, even if for only four days. As I write this, my wife is currently in Billings, Montana, and tomorrow will be heading to Bozeman – the first time either of us have been back since 2011 – to see some of our old friends (and I am extremely jealous!). On a parting note, it's not easy living so far away from literally everyone you've ever known or cared about - and I generally have made a good attempt at putting on a game face. I didn't realize how much I missed everybody until the conference was over - and certain friends got a rare (if not embarassing) peek behind the armor. It all goes to show that I really have to get this dissertation finished, so Sarah and I can return to the US and make a bunch of visits to current and former MSU students spread across the four corners of North America!
Posted by Robert Boessenecker at 3:26 AM No comments: