New articles will be coming soon. I've spent the week and a half since I've been back in Montana recuperating from a moderate case of poison oak, writing major revisions for an article about Pliocene pelagornithids from California (for JVP, with N. Adam Smith), and completing revisions for an article on nonmammal vertebrates from the Purisima Formation (for PalArch's Journal of Vertebrate Paleontology).

Anyway, sometime in the next week or two, the February issue of Palaios will be published, which includes one of my first published articles: Mammalian bite marks on juvenile fur seal bones from the late Neogene Purisima Formation of Central California, by myself and Frank Perry of the Santa Cruz Museum of Natural History.

To view the abstract of the forthcoming article, go here. Once the article comes out, I'll have a less technical summary of it posted here at coastal paleo.
Posted by Robert Boessenecker at 7:47 PM 4 comments:

Around 4 o'clock in the afternoon along the central California coast, the winter sun gets low on the horizon, giving a few minutes of lengthened shadows and rich, golden light, before it disappears behind a fog bank shortly afterward. The resulting decrease in light marks a premature sunset that can be barely workable sometimes. Winter field work is difficult even in California due to the shortened days, extreme tide fluctuations (even worse in Northern California), stormy weather, muddy trails, and low amount of sand on the beach (which results in a decrease in the number of access points and thus, fewer choices in access route). Oh, and not to mention poison oak, which during the winter, lacks its distinctive leaves). In this case, one of our access points was a small canyon which opens up towards the beach; during the winter, the stream fills the landward side of the canyon up with fetid, organic rich water while waves buildup a barrier bar, which dams the creek and forms a nice, disgusting little lagoon. When we arrived at this locality, the creek had pooled up, and was extremely cold as it had still been in the shade when we got there. The creek water hovered just over freezing, and was a good ten degrees colder than the ocean. It was still just as cold when we left; by the time we were done with the jacket, it was twilight. Oddly enough, on our way out, we came across a couple teenagers going down to the beach (the hard way, staying dry, but going up above the water-filled canyon on the side of a cliff) with only their cellphones for light. They must have made it out safely, although I'm not sure how (I never read in the paper about anyone dying out there). 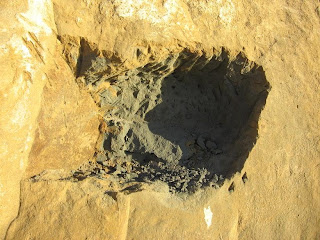 Here's the excavated pit after the pedestal popped out. 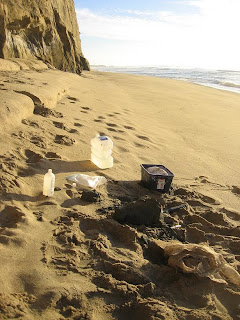 Because the fossil-bearing pedestal had already popped off, we had to place the pedestal on a mound of sand to jacket it. 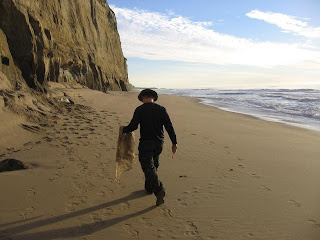 Chris takes burlap strips back to the excavation. I quite like this photo. 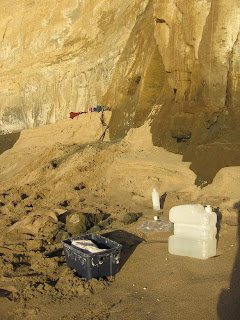 Just before we started the jacketing process. You can see in the background where the hole is, and that just a small sliver of the former 'fairweather' beach was left to stand on in order to reach the fossil. Within a few days, this was all gone. The sand surface you see there (where the red jacket is laying) is the higher surface of the beach from over the summer - just a small remnant of it remains. After this sliver is gone, the fossil would have been many feet out of reach above the beach. 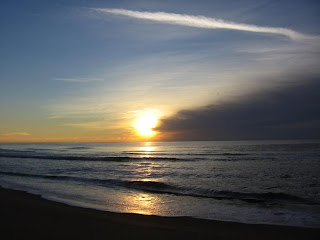 A beautiful sunset (and advancing rainclouds) heralded our completion of the excavation. 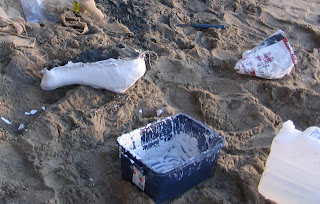 The odontocete skull is halfway jacketed, and as the temperature begins to drop, our hands were beginning to go numb.

Chris cuts more burlap strips for the second half of the jacket. 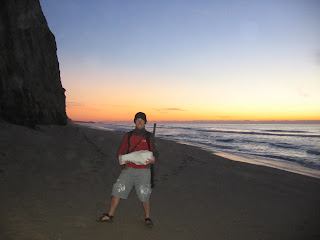 Finally! Just before dark, the plaster jacket is completed, and we're ready to lug all the gear and fossils back up the trail.
Posted by Robert Boessenecker at 1:29 PM 2 comments:

Over Thanksgiving break in 2009, while scouting out a locality for a future permit application, I spotted a nice braincase of a small odontocete skull exposed in a cliff face. The following november, I received a permit, and returned to the locality one year later with my friend Chris Pirrone to excavate the fossil. I knew this excavation would be slightly challenging, because we would be pedestaling the fossil sideways instead of from the top (I have done worse before - I have successfully trenched and pedestaled fossils in overhangs, including an odontocete skull). 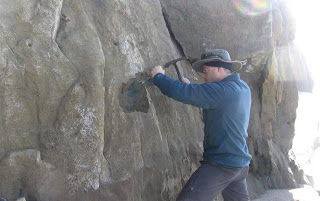 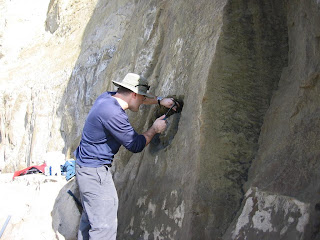 Chris excavating later in the morning. 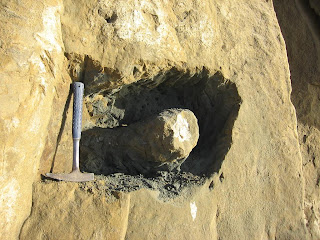 The skull by midafternoon.

By the middle of the afternoon, we had excavated a ring shaped hole around a cylinder of rock which contains the skull. A few pieces broken off (and glued back on) indicated that the skull was very well preserved. However, given the remaining amount of rock, I was concerned that we would not be able to finish before 5pm. Additionally, while excavating on the left side of the hole, I split off a piece of rock which contained a fragment of the rostrum. This indicated the rostrum was relatively long - a scary prospect, perhaps meaning I would have to return and finish the excavation the following day. 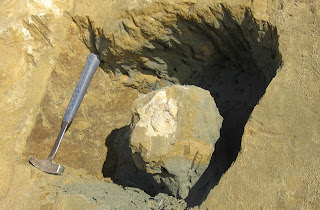 Here's the posterior braincase exposed: the right side of the skull is exposed, and the skull is upside down. The right squamosal, and occipital condyle are clearly visible in this photo.

After continued trenching around the cylinder of rock, at about 4pm, the base of the pedestal snapped unexpectedly, and the whole thing came out in one fifty pound piece. The anterior end of the pedestal terminated against an oblique fracture surface; I was nervous that the rostrum may have continued through this fracture. I carved off a half-inch from this surface, and found no bone; additionally, I found no bone in the end of the pedestal. Fortunately, this means the entire skull is preserved within the block.

Posted by Robert Boessenecker at 11:00 AM No comments:

Sorry for the delay in posting; I've been enjoying a lazy winter break so far. Over thanksgiving break, I spent some time at a Purisima Formation locality which I had just received a new collections permit for. I went out with my friend Chris Pirrone to this new locality. Unfortunately, there hadn't been much storm activity since the summer. Storm activity achieves two things: it washes off a ridnd of weathered clay minerals off (in addition to algae), and it transports sand from the beach to offshore bars, which during fairweather, are slowly eroded and the sand is transported back onshore. 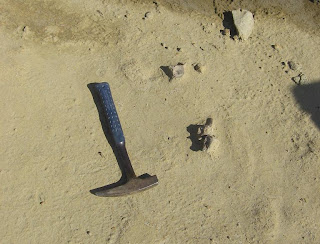 After a while of not finding anything, I spotted these three associated vertebrae - from some kind of a small odontocete. Two of the vertebrae lie in near articulation, and the other is slightly displaced. 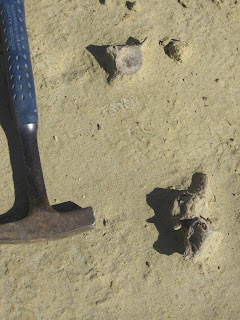 Here's a closeup view of the specimens. 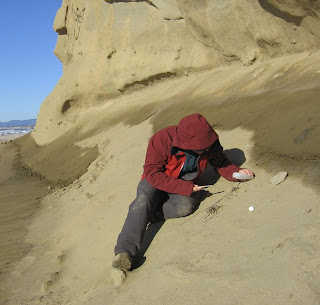 We collected these three vertebrae, but it was too cold to stay and dig through the sediment for more bones. I'm sure there are more; some forelimb or cranial elements would be great. I'll return to the locality once some more storm activity cleans off the cliff exposures.

During the course of my taphonomic research of fossil vertebrates in the Purisima Formation, I've found that associated vertebrate remains (two or more elements which in life are only joined by soft tissue) are extremely rare in the shallow marine fossil record (if the Purisima Formation is taken to be a representative shallow marine deposit). Indeed, this is one of a couple dozen specimens showing any degree of association or articulation.

Posted by Robert Boessenecker at 1:02 PM No comments: