Last week I flew from New Zealand to California, and spent a few days in the SF bay area and Lake Tahoe relaxing with my family, as well as fitting in a few museum visits to UCMP (Berkeley) and Sierra College. Things have progressed quickly over the last few weeks – within a few days of leaving the southern hemisphere, I submitted a long manuscript I had been toiling over for a year – not the longest period of time spent on a manuscript, but over the past year I have not focused on much else – since arriving in NZ in march, I had gone through about ten drafts – including receiving preliminary reviews and comments from my adviser and labmate Felix Marx (…thanks, guys!). The manuscript is 120 pages or so in length, and concerns fossil marine mammals from a late Pliocene marine mammal assemblage from the Purisima Formation. Within 24 hours of leaving Dunedin, Morgan Churchill and I also completed major revisions for a manuscript regarding the extinct walrus Pelagiarctos; we had received excellent reviews (by that I mean high-quality) which really, really improved multiple aspects of our paper – including our phylogenetic analysis. Thirdly, I was able to complete a bunch of figures for an in-prep manuscript on Herpetocetus with Joe El Adli and Tom Deméré I’ve been helping with – including a life restoration, which I’ve shown below. 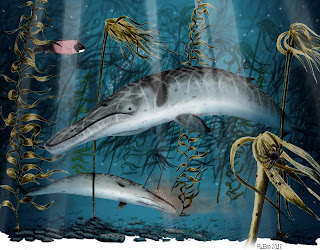 Life restoration of Herpetocetus I just completed for a study with Joe El Adli and Tom Deméré (SDNHM). This illustration took about 30 hours to complete, between switching from graphite and digital. 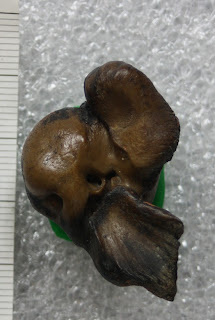 One of the fossil specimens I had to re-photograph. I've learned some excellent tips from my adviser. This is a Pliocene periotic of a globicephaline dolphin from the Purisima Formation near Santa Cruz. Although hundreds of odontocete periotics have been found in the Purisima, this is one of only two globicephalines. Jonathan Geisler (NYCOM) and I are writing up this along with a battered globicephaline skull.

At UCMP, I spent some time re-photographing a bunch of fossils I donated/curated at UCMP over the last year. Many of them I had originally photographed with a makeshift photo setup at my parent’s house in California, where my wife and I stayed during the months leading up to our move down under. Many of them were pretty crappy, so I definitely needed to take better pictures on a light stand, with proper focus, lighting direction, and backlighting. I mostly photographed fossil cetacean earbones and skulls – but also spent some time photographing some specimens I had not yet seen. At Sierra College, I visited to photograph an unusually (geologically) young Herpetocetus specimen… and spent the weekend at Tahoe writing up a short manuscript on the fossil. And… it’s mostly done. I’ll try to have it submitted shortly after I return to the south and am able to construct figures. 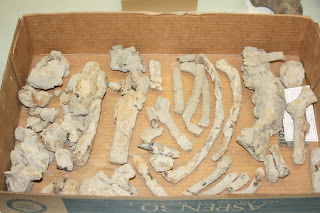 One of the reasons for visiting Sierra College - a partial skeleton of an adult male fur seal Thalassoleon macnallyae skeleton from the Purisima Formation in Marin County that Dick, my wife, and I collected last October on a scorching day. The pieces are all glued back together (mostly) but still need some work; understandably, new dinosaurs have commanded lab space at SC.

My visit to the Smithsonian will be roughly a total of two and a half weeks – spread over this and next week, and the last week of October. I arrived in DC yesterday – flew in to Dulles – and took the metro bus from the airport to downtown DC. It took an hour and 20 minutes, on a bus in traffic with standing room only – and I had to hold on to my roller suitcase the whole time so it wouldn’t roll away when the bus turned or slowed down. But, it only cost me 6 bucks (a cab ride would’ve been 65 bucks). I still had to drag my damn luggage from L’enfant plaza (~0.5 miles south of the Smithsonian, and up four flights of stairs without an ADA accessible ramp), and across the mall (which is all sand/gravel, perfect for dragging something heavy with tiny wheels), but I finally made it to the museum, where I finally met collections manager Dave Bohaska – who has been very accommodating and helpful so far (and entertaining). After getting signed in, I had a quick tour of the museum, ran into fellow marine mammal student Mizuki Murakami, and found Ewan shortly thereafter, who introduced me to long time ziphiid expert Jim Mead (who is on the other side of the building, in the Dept. of Mammals). After eating lunch at a diner across the street from Ford’s theater (FYI the place where Abraham Lincoln was shot, and two doors down from where he died), I spent much of the afternoon perusing the collections for fossil pinnipeds. I was able to check out specimens of Pteronarctos, Proneotherium, Pontolis, Pinnarctidion, and several other critters who aren’t brought to you by the letter P. Upon leaving the museum and waiting for my buddy Ben, who is graciously letting me sleep on his very comfy couch – I ran into my longtime friend and colleague Rachel Racicot, and several of her fellow Yaleys. 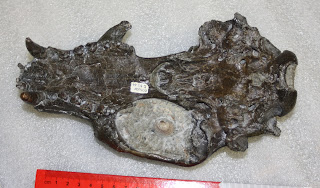 The paratype skull of Proneotherium repenningi, in USNM collections. Believe it or not, but this tiny little seal-like pinniped is one of the earliest (and most primitive) walruses. Some subtle features of its basicranium provide the telltale clues. This specimen was, of course, collected by my hero, Douglas Emlong.

Today (Wednesday) I spent the morning checking out fossil pinnipeds, and went to the Dept. of Mammals coffee break – a weekly activity, where I met a bunch of fascinating folks who work on things not quite extinct just yet. Mizuki, Ewan, and myself met up for lunch with Ewan’s former student Daniel Thomas, who published a series of articles on paleontological applications of Raman spectroscopy. After lunch, we all went to MSC – the Museum Support Center – in Suitland, Virginia – also known as the Garber facility, where the big whales are. Actually, most of the whales, and all of the modern marine mammal collections. It was pretty damn cool. We’ll be heading back out there tomorrow, and will talk about it in a later post. 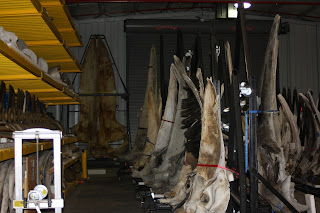 The big whales. Yes, that's a blue whale (Balaenoptera musculus) towering over a veritable congregation of behemoths. The racks on the left have nothing but gigantic vertebrae. For purposes of scale, the skull up front is a "tiny" (~2m long) minke whale skull (Balaenoptera acutorostrata).


Coming soon - more updates from the east coast, and Bone eating worms part 4 (and 5?).
Posted by Robert Boessenecker at 6:21 PM No comments:

It's that time of year again, as we desperately try to crank out two weeks of work into our last week before the SVP meeting. This year, SVP is in Raleigh, North Carolina. 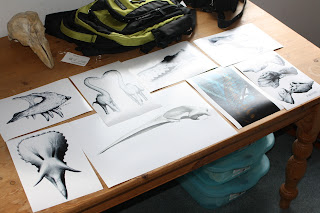 As the last few years, I will be dropping off several prints of my illustrations for the annual benefit auction - which raises a bit of money for the Society of Vertebrate Paleontology to sponsor memberships, among other activities. You can see above that I'm delivering 8 prints, including a large 11x20" print of my Sei Whale (Balaenoptera borealis) skull illustration. So, take a look at the auction, and make some bids if interested! See you there.
Posted by Robert Boessenecker at 7:46 PM No comments: