More on Puijila later on this week - don't worry, I know its a hot topic, and I love seals, but I'll post on that later.

Last weekend I participated in the 4th annual Earth Sciences Colloquium, a student research conference done in our department for students and organized completely by students (go us!). In any event, I helped out quite a bit with it, and (gasp) was the technical chair for the conference - I communicated with all the presenters, organized the technical program, and moderated the oral sessions. It was nearly enough work so that I almost didn't present my talk, the subject of this post; the title page is below. I've included a bunch of slides I thought looked neat. On the title page are the logos of various institutions loosely involved with this research (and planned research projects/collaborations): J. Geisler (Georgia Southern U.), Rachel Racicot (Yale U.), and Frank Perry (Santa Cruz Museum). 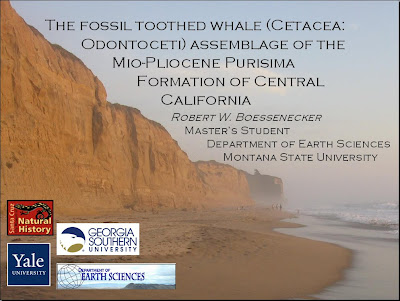 Shockingly enough, I talked about cetaceans. Since it was for a more general audience, I spent a while talking about how awesome the whale fossil record is: 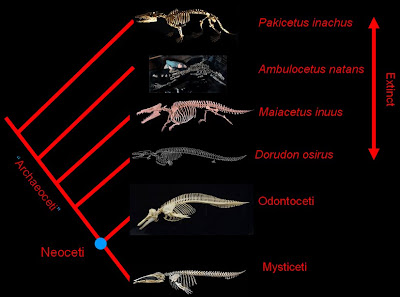 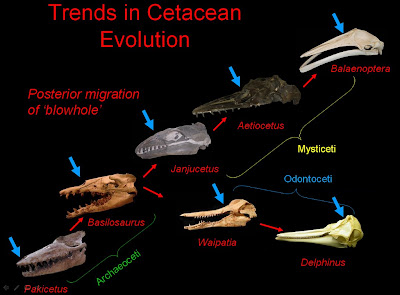 One of the really apparent morphological transformations is the posterior migration of the nares. In reality, I could have added a dozen or more transitional fossils in here. 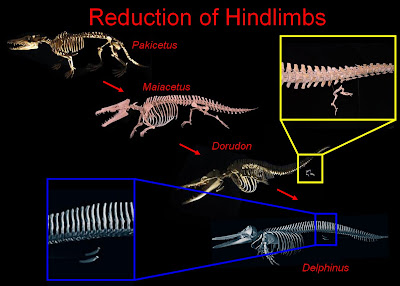 And of course there's the whole hindlimb thing. I love how the pelvic girdle of Dorudon and other basilosaurids just kinda 'floats' in soft tissue. 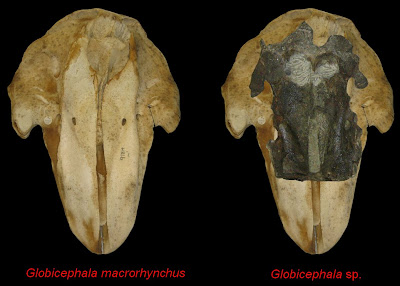 On to actual data... I won't elaborate on this much, as this is the subject of my SVP abstract that I co-authored with Jonathan Geisler (Georgia Southern U.), and Frank Perry (Santa Cruz Museum of NH). Above is a partial skull of a late Pliocene pilot whale superimposed over a modern Globicephala macrorhynchus. 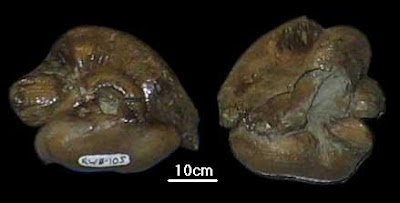 This is a recently collected gem - an articulated petrotympanic of a new genus of porpoise or basal delphinoid. This is associated with a partial skull that has yet to be completely prepared. 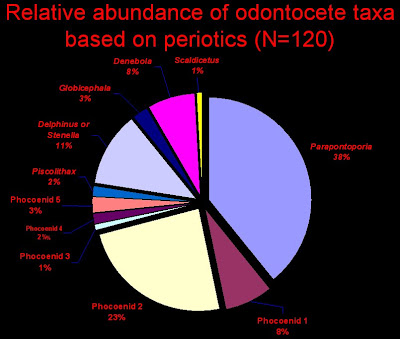 Lastly, here is a pie chart I made for fun, of all the different periotic morphotypes represented in the Purisima Formation (N = 120). I can probably get N up to 150 if I need to. In other news, my Master's thesis proposal has received its informal stamp of approval from my committee, so kickass.

Edit: I really need to use the spellcheck feature more judiciously; I typed up this post pretty fast, so the typos were pretty obvious. I apologize for all the grammer nazis. Just typos, not a sign of my incompetence.
Posted by Robert Boessenecker at 2:49 PM 2 comments:

Its been a very busy week for me, and since I finished my proposal tonight, I thought I'd spend some time on a long-ish post. Its been an exciting day. Aside from the obvious (i.e. the topic of this post), today saw the release of the most epic PALAIOS issue ever:

The first of these is basically 100% relevant to my master's thesis; the second wasn't too exciting, and the third - well, I'm keeping that on the D-L for now.

Without further adeu, I am very pleased to present Puijila darwini, a very early 'pinniped'. I was extremely excited to read this paper, as was my colleague Morgan Churchill, whose enthusiasm was much shared via facebook. The two of us are some of the only paleontology students in the U.S. studying fossil pinnipeds (ironically both from landlocked states; the last sea in this area was the Cretaceous-Paleocene Cannonball Seaway). 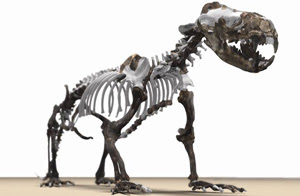 As you can see, this is a pretty cute little critter. It has short-ish fore- and hind-limbs, a complete arctoid dentition (i.e. the postcanine dentition is not simplified as in later-diverging pinnipeds), a wide otter-like skull, large infraorbital foramina, robust forelimb bones (the humerus in particular) which have large muscle attachment areas, flattened phalanges, and an elongate tail.

Two very intriguing implications of this study arise from the location and geologic context of this critter. For starters, this fossil is from Nunavut - specifically, Devon Island, well above the arctic circle. The authors state that this may indicate an arctic ocean origin for pinnipeds. This is fine, except for Enaliarctos occurring in the North Pacific in a far more advanced 'form' several million years before. Demere et al. (2003) predicted the center of origin for pinnipedimorphs to be the North Pacific. It is certainly possible that this is perhaps a function of collecting bias, and that other Oligocene marine units worldwide need to be prospected and more greatly scrutinized (i.e. New Zealand, Australia, Argentina, India (?), and Japan). In any event, the Demere et al. hypothesis is certainly still possible, and likely more parsimonious as 1) the later occurrence of Puijila in the arctic may be a function of dispersal from the North Pacific and 2) there are other similar taxa (i.e. Potamotherium, Amphicticeps) from Europe and central Asia.

The second implication is that Puijila is from lacustrine deposits, and thus was likely semiaquatic. The pre-Enaliarctos pinniped record was effectively nonexistent, and gave no hint at the transition from land-to-sea. The cetacean and sirenian fossil records, however, have a clear transition from 'amphibious' taxa (Pakicetus), semiaquatic taxa inhabiting freshwater (i.e. the "crocowolf" Ambulocetus), semiaquatic marine taxa (protocetids such as Maiacetus and Georgiacetus) and fully (permanently) marine taxa (basilosaurids such as Basilosaurus and Dorudon). However, Enaliarctos is clearly marine in terms of its adaptations and associated depositional environment. In the case of Puijila, however, the associated sediments are lacustrine, and the adaptations are very 'otterlike'.

Additionally, the phylogenetic position of Potamotherium as a pinniped in this analysis is very interesting, as this taxon has traditionally been interpreted as some kind of musteloid, and in the past used as evidence for a true seal-mustelid link (which is a load of B.S., and I'll post about that in the future). Short version: I really, really liked this paper. I first heard about this critter at SVP, although someone told me instead that it was a very early otariid (fur seal/sea lion).

Addendum: I forgot to mention this in my original post, but Tedford et al. (1994) conducted a phylogenetic analysis of the arctoidea when they described new material of the 'beach bear' Kolponomos (a topic for a post of its own, because it is far weirder than Puijila could ever hope to be). Kolponomos is an ursid-like critter, with forward pointing eyes, and very wide/large sea otter-like teeth presumably for crushing mollusks, and postulated to inhabit the intertidal zone. It is known thus far only from shallow marine rocks. Kolponomos is from the late Oligocene and early Miocene of the Olympic Peninsula, and I know at least from the Clallam Formation. In any event, at the time Kolponomos plotted out as the sister taxon to pinnipedia, another intriguing hypothesis. I think future analyses, especially ones investigating pinniped ancestry within the arctoidea, should also include Kolponomos. If Kolponomos is in this group of pinniped-like arctoids as well, it would certainly paint a more convoluted picture (i.e. both freshwater semiaquatic and coastal semiaquatic 'proto-pinnipeds'. Anyway, I really need to get to campus to print off Wang et al. (2005), do some touch ups on my master's proposal, and finish my presentation on Purisima Formation odontoceti.
Posted by Robert Boessenecker at 1:20 AM 9 comments:

Once again, there's been a lull in my free time available for this blog, so I apologize. I've had a great many things keeping me busy - being turned down by grants, getting grants, writing my SVP abstract coauthors, writing SVP travel grant applications so that I can go to England this year, putting together a powerpoint on toothed whales of the Purisima Fm. (I'll use much of the imagery for future posts) for our 4th annual Earth Sciences Colloquium, reading about the Proterozoic LaHood Formation and Carbonate depositional systems for class, attempting to organize the Colloquium, AND finishing my proposal by tommorrow. Luckily, 3/4 of all this is already done.

And with respect to the mystery fossil: the jury is still out, but Dave Bohaska made an interesting observation that it is similar to an odontocete vomer; it may be a highly abraded specimen. I'll have to see the originals again (I saw them over spring break; the collector wondered if I had made any progress - I shrugged).

There'll be a new post as soon as I get my proposal and colloquium presentations completed.
Posted by Robert Boessenecker at 1:31 AM No comments:

Here's a couple bones I saw in a private collection over winter break, and these left the collector and myself stumped. I have no idea what on earth this thing is, but it looks mammalian.

Things to note: The concave part does look like an articulation, and the bones appear to be symmetrical. The larger of the two has some mud pellets cemented to it, so ignore those.

The part of the rock unit this is from is latest Miocene-Pliocene, and is generally devoid of sirenians. The usual suspects are pinnipeds and cetaceans.

I have seen a similar element at UCMP associated with an odontocete ulna, but nothing was said about the weird element.

Does this look obvious to anyone? I apologize for the colorful bedspread that served as my backdrop: 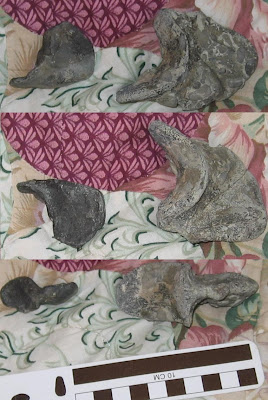 Posted by Robert Boessenecker at 1:52 AM 7 comments:

One of the main reasons for our road trip to California was that my friend Lee needed to visit the UC Berkeley Museum of Paleontology (UCMP) to meet with Dr. Mark Goodwin on collaborative research on Ethiopian dinosaur teeth (Hall and Goodwin, 2007).

While Lee and Ash Poust visited UCMP, I went upstairs to take a look at the UC Museum of Vertebrate Zoology, which has a pretty decent osteological collection of marine mammals. 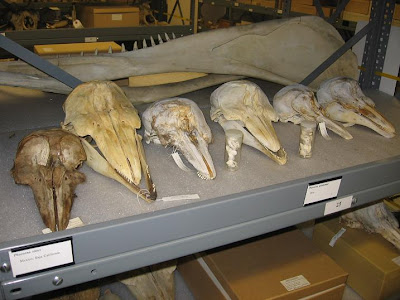 I had a long laundry list of material to photograph; above are a group of phocoenid crania. There is an abundance of phocoenid material from the late Neogene record of California and Mexico, including the Purisima Formation. 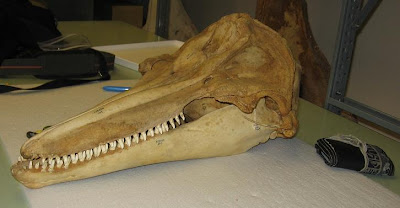 But, opportunistic photos of other critters, such as this bottlenose dolphin (Tursiops truncatus), were definitely not turned down. 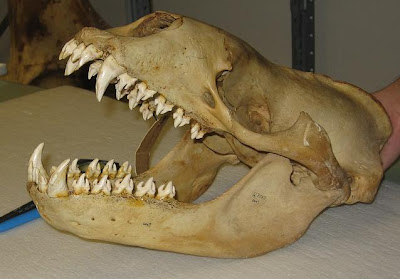 MVZ also had a beautiful skull of the terrifying Hydrurga leptonyx, the Leopard Seal. The postcanine teeth are what really amaze me. 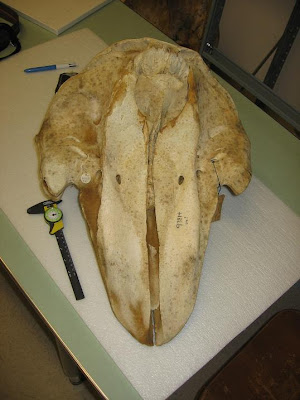 I was also there to look at modern Pilot Whale (Globicephala macrorhynchus) crania. Fortunately, there were several, but none from the Long Finned Pilot Whale (G. melas). I'm currently studying a Pliocene skull that is a dead-ringer for Globicephala. 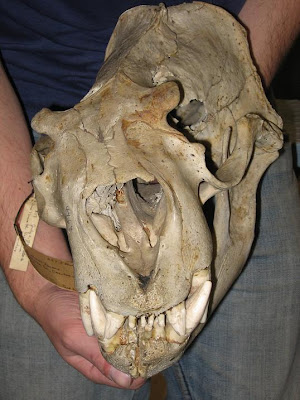 Here's a real gnarly one to part you with. This was an extremely pathologic Steller's Sea Lion (Eumetopias jubatus) cranium; the entire anterior portion of the skull is deformed and offset to the left. In dorsal aspect, the skull literally takes a left-hand-turn. Crania of this species are gnarly looking enough, and this specimen takes it to the next level.

The next spring break post will have photos of specimens collected over spring break, so it may have to wait a while, as I've been too busy to prepare much of the material. So the next few posts will be unrelated, and I think I'll do a mystery fossil next.

Refs-
Hall, L. and M. Goodwin. 2007. A preliminary analysis of dinosaur teeth from the Mugher Mudstone of Ethiopia. Journal of Vertebrate Paleontology 27(3):86A.
Posted by Robert Boessenecker at 4:49 PM 2 comments: