After scouring the coastal exposures of the Purisima Formation for every important fossil poking out of the cliffs, it was time to explore an exposure of the older Santa Margarita Sandstone that I had only visited once. It was much hotter and drier here. 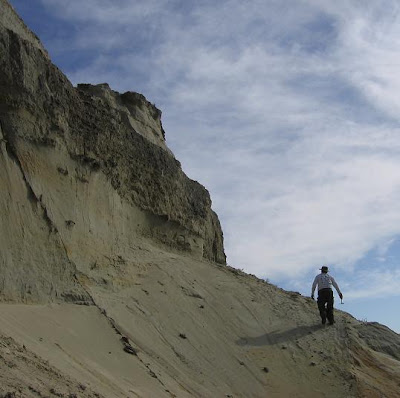 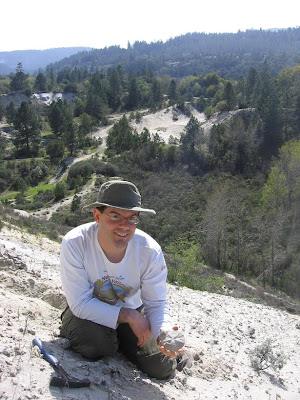 The Santa Margarita Sandstone is locally famous for its abundant fossilized shark teeth that can easily be collected by screening through the sand. Also plentiful are very well preserved sand dollars (Astrodapsis spatiosus), which at this locality are sometimes concentrated into 3-4 meter thick coquinas. C. Pirrone displays a nice Astrodapsis in the above photo. These sand dollars usually occur in the 2-3" range, but at this locality, can measure up to around 5" in diamater. 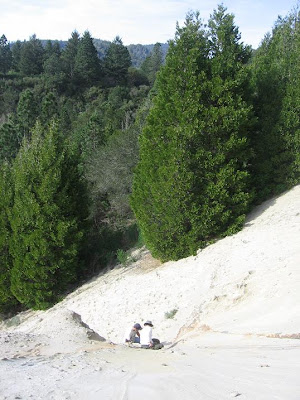 But we weren't looking for shark teeth or sand dollars. Parts of the Santa Margarita Sandstone have in the past yielded partial and complete skeletons of sea cows and walruses, and cetacean and bird bones. When I took this photo, C. Pirrone (right) and A. Poust (left) had found something neat, they said, but wouldn't tell me what until I made it down the slope to see for myself. 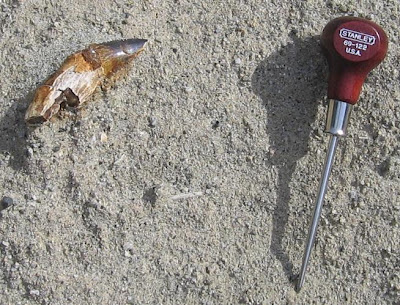 What the heck was it? I was secretly hoping for a partial skull, and realistically thinking it would just be a bone fragment. Instead, I was greeted by the glint of blue enamel in the sunlight; it was a near complete, nearly perfect canine of the 'primitive' walrus, Imagotaria downsi. This is not a major discovery, by far; several complete and partial skulls of this same beast are known from elsewhere in the same formation. After looking through Repenning and Tedford (1977), this specimen appears to be a lower canine from a male I. downsi. Lower canines of many pinnipeds (probably Imagotaria as well) are more curved posteriorly than upper canines. Additionally, there is a large wear facet on the anteriomedial surface, from occlusion with the upper third incisor. More about this later. 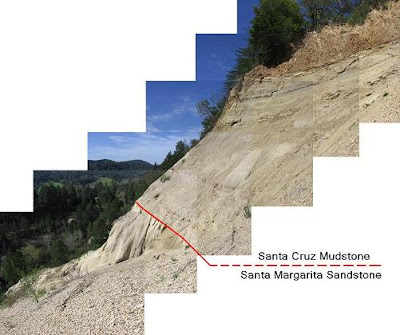 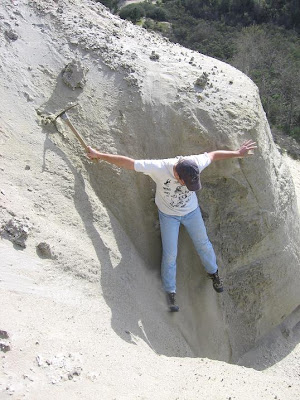 To check out a shelf of sandstone with a lot of float on it, A. Poust daringly jumped down from above.

A. Poust found a chunk of bone; but it was only a highly abraded, blob-shaped chunk, probably originally a piece of mysticete whale bone. Too bad. Later on and higher up we found several more Imagotaria bones, including a juvenile humerus, and an adult thoracic vertebra. More on this later.
Posted by Robert Boessenecker at 4:01 PM 5 comments:

Upon a triumphant (and daresay dry) return to the San Francisco bay area, it was time to visit my Master's Thesis field area - the Purisima Formation of Central California. Fortunately, unlike usual visits, I had two lackeys to follow me around and find stuff too - L. Hall and A. Poust. 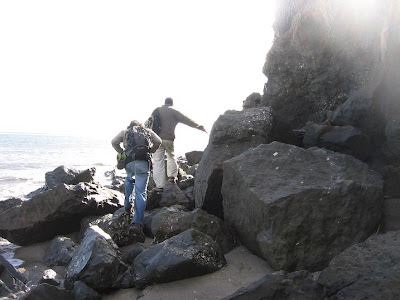 Here are Lee (left) and Ash (right) scrambling over some boulders of the Purisima Formation. Note all the fossil shells.

Here I am, at a difficult to get to locality, about 30' above the beach. 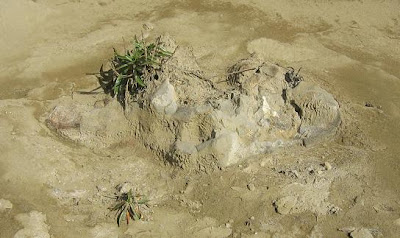 Here's a gigantic concretion with a partial mysticete skull inside; I first spotted this two summers ago. The concretions here are ridiculously hard, and seeing as this skull is over four feet wide, I doubt this will ever get collected. 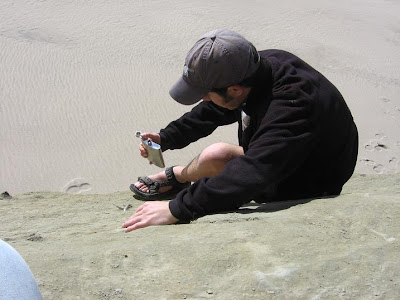 Here I am, pouring some vinac on a large piece of calcified cartilage (likely a complete Meckel's Cartilage from a skate, Raja binoculata. I use an aluminum flask because the acetone in vinac has the annoying tendency to eat through plastic bottles. Aluminum is a great choice; aside from thermite and acidic alien blood, few substances can destroy metal (at least those that a humble field paleontologist come across). 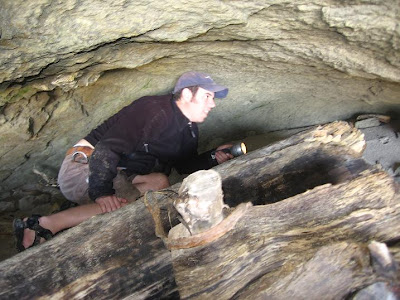 Later that day, climbing around in a cave with a flashlight. The flash makes it seem way lighter in there than it really was. The ceiling of the cave is an exposure of a bonebed where I have collected several important fossils such as a handful of mysticete and odontocete earbones (tympanics), and a complete skull of the enigmatic, undescribed 'skimmer' porpoise (more complete remains of this taxon are on display at the San Diego Natural History Museum, and are under study by Ms. Rachel Racicot). 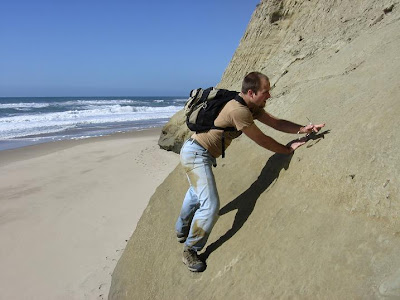 A. poust, struggling to keep from sliding down the cliff. This is an important but challenging locality, and footholds that I carved in several years ago are now totally gone. 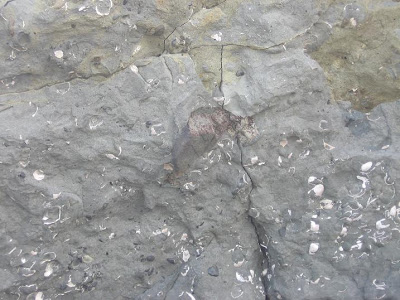 Here's a large whale vertebra, exposed in the bottom of a large, overhanging boulder.

This spring break I went on a road trip with two of my fellow students - Lee Hall and Ash Poust. Lee needed to visit UCMP (the UC Museum of Paleontology at UC Berkeley) to meet with a coauthor and look at dinosaur teeth, and Ash just wanted to actually see the sun, and happily agreed to join us on our quest (for sun, data, and fossils).

Our trip began at 3:00am friday the 13th, and we drove in a single day from Bozeman all the way to the coast of Oregon, to check out an early Pleistocene marine unit which has in the past yielded some of the North Pacific's oldest true sea lion fossils. 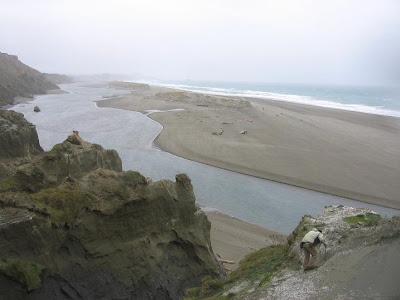 Here's a view of the locality, with L. Hall prospecting in the foreground. 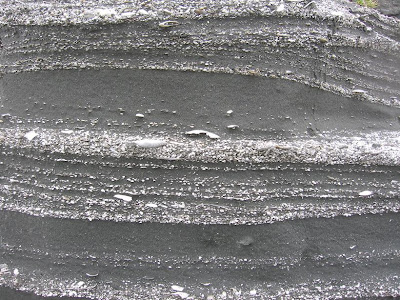 Here are some shell beds of the same formation. 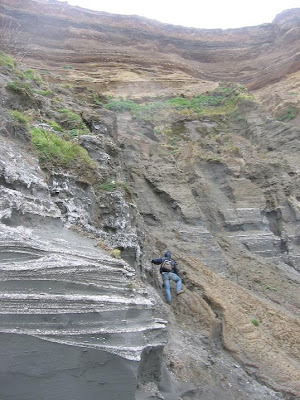 A. Poust can be seen scrambling up a 'frozen' debris flow in order to scrutinize some exposures. On this same day, he found a very well preserved lower jaw of a sea lion as float on the beach - arguably the best fossil of the entire trip, one which can easily be the focus of a scientific paper all on its own.

Here's a photo of myself, standing on a small pinnacle of the 'rock' unit.

Our travels also took us to a Middle Pleistocene marine formation in Northern California, where fossils of birds, sea otters, and pinnipeds have been collected historically. Additionally, a mammoth scaphoid (wrist bone) and a claw core of a giant ground sloth (Megalonyx sp.) are also known from here. Along the same vein of terrestrial mammals, I found a small artiodactyl astragalus here. A. Poust found a proximal humerus of a 'medium' sized bird. 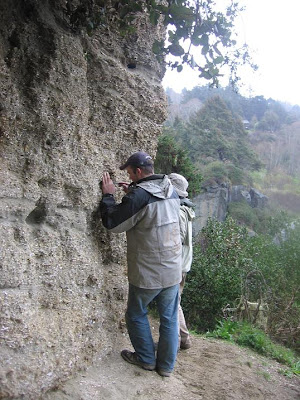 A. Poust (left) and L. Hall (right) can be seen prospecting the site here. 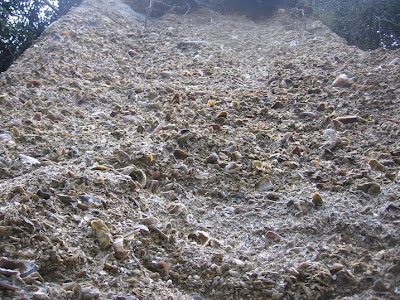 Here is a view up the exposure, showing the incredible volume of shelly material in this deposit. Shell beds this rich in invertebrates are sometimes referred to as coquinas. 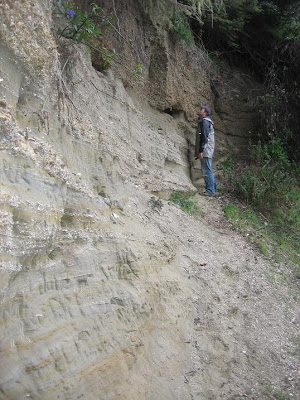 A. Poust staring at the exposure. 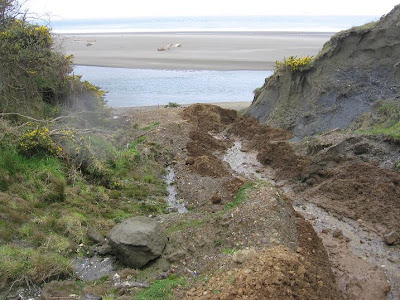 Here's another photo from the Oregon locality, showing raised levees formed from debris flows traveling down the gully here. 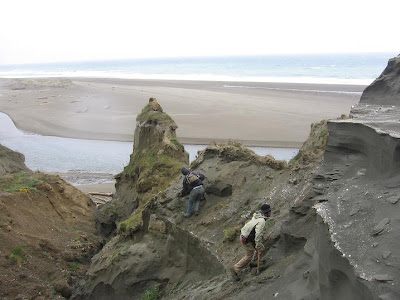 Several more posts are required to adequately document the rest of the spring break 'expedition'. Expect some posts about fieldwork in the Purisima Formation and the Santa Margarita Sandstone, coming soon.
Posted by Robert Boessenecker at 7:24 PM 5 comments:

I've been a little busy recently, applying for another grant and trying to get everything together for a spring break road trip/mini expedition to the Pacific Northwest. I'll talk about that later, though.

In any event, there were only a few attempts to answer the quiz, and no one got it, so I'll give the answers and explanations here. 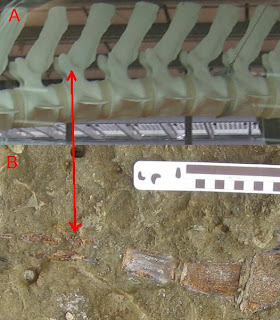 Its difficult to see in this size, but should be more apparent when you click on the photo. One feature of this fossil indicated the anterior direction of the column - a cross section of the zygapophyses (I can't remember if these are prezygapophyses or what; perhaps I should read up on Emily Buchholtz' work). In mysticetes (and odontocetes for that matter, but they're much different in shape) these diverge anteriorly, and occur in the posterior thoracics and lumbar series. I've included a photo of a mounted Blue whale (Balaenoptera musculus) to illustrate the point. So, in the original post anterior is to the top of the photo, and here, to the left hand side. Unfortunately, this also means that if a skull is there, it is covered by about 20 feet of rock and concrete, underneath a road.

Note: The B. musculus skeleton is shown in lateral view, and the fossil is shown in dorsal view. 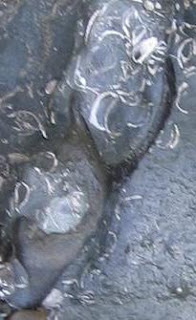 It's a mysticete scapula. The long hooklike part is the acromion process, and the wide/thick part is the glenoid fossa. So we're looking at the distal end where the humerus articulates. Here's a complete scapula for comparison: http://farm3.static.flickr.com/2398/2342861085_66b7f89293.jpg?v=0 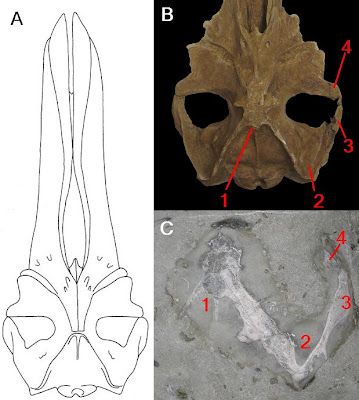 Unfortunately, this skull is in one of the hardest primary sedimentary rocks I've ever seen or hammered upon, and in a block the size of a refridgerator. There's no way this thing is coming out without access to a jackhammer and a truck. There are four labeled features that help identify it as Herpetocetus. Some of these are not unique to Herpetocetus, but do not occur in any other known contemporaneous mysticetes, so can be used for purposes of identification. 1) The cranial vertex; the vertex is pyramidal in shape, bears a distinct saggital crest on the supraoccipital, which is also very acute. 2) There is a distinct deep fossa medial of the dorsal crest of the squamosal, which is an synapomorphy of the clade Herpetocetinae. 3) The zygomatic process of the squamosal is anteriorly oriented. 4) The postorbital process is elongate and finger like, which may be a reversal to the primitive condition of mysticetes.

Anyway, these are just some things you can keep an eye out for in the field to help you identify in-situ fossils. As a rule, I generally collect everything that isn't a cetacean rib or vertebra.