Now that the "Lost Mammals of Zealandia" pilot project is completed - a project devoted to scouring various Paleogene formations of the South Island for elusive remains of terrestrial mammals - the lab has moved on to the next grant-funded project, which we just refer to as the "Triage project". We've got a rather large backlog of unprepared plaster jackets from a single quarry - the Hakataramea lime quarry - mostly with fossil cetaceans. 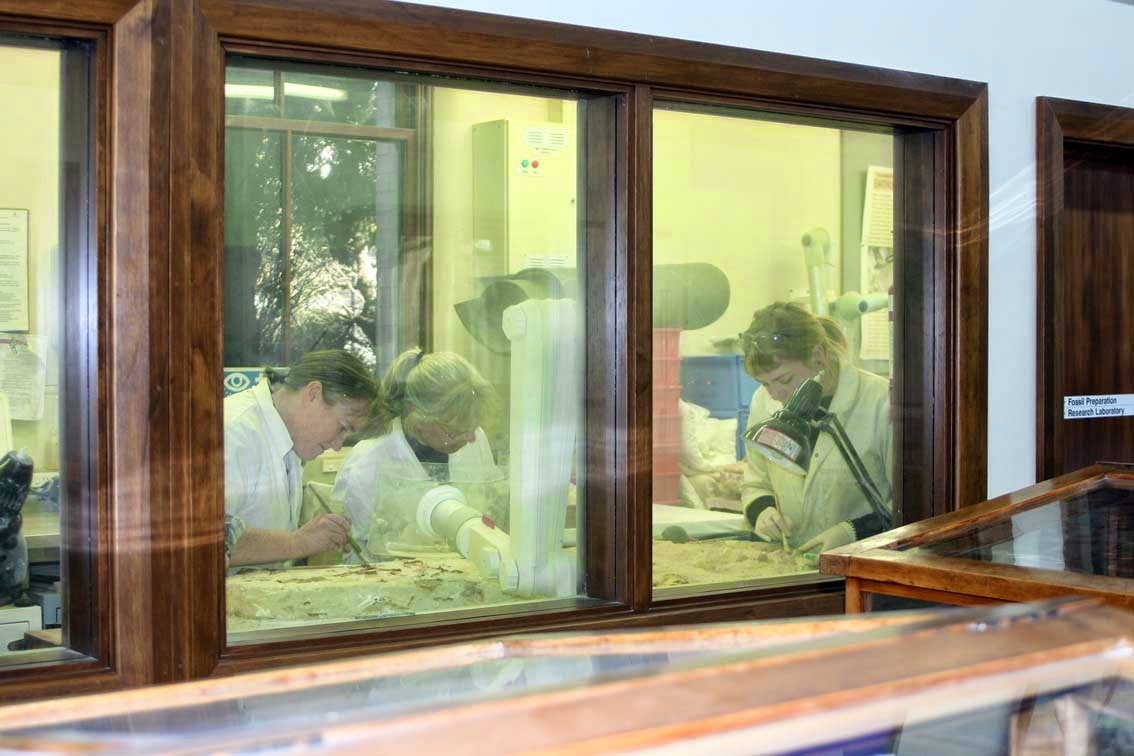 Our lead preparator - Sophie White (right) and two temporary preparators (Diane and Simone, left) work on what appears to be the world's most complete Oligocene odontocete, a little tusked dolphin with nearly complete skull, mandibles, tympanoperiotics, teeth, hyoids, complete vertebral column, ribs, and parts of both forelimbs. I will gleefully admit that Sophie and I are responsible for digging this one up in the field and finding it's skull. 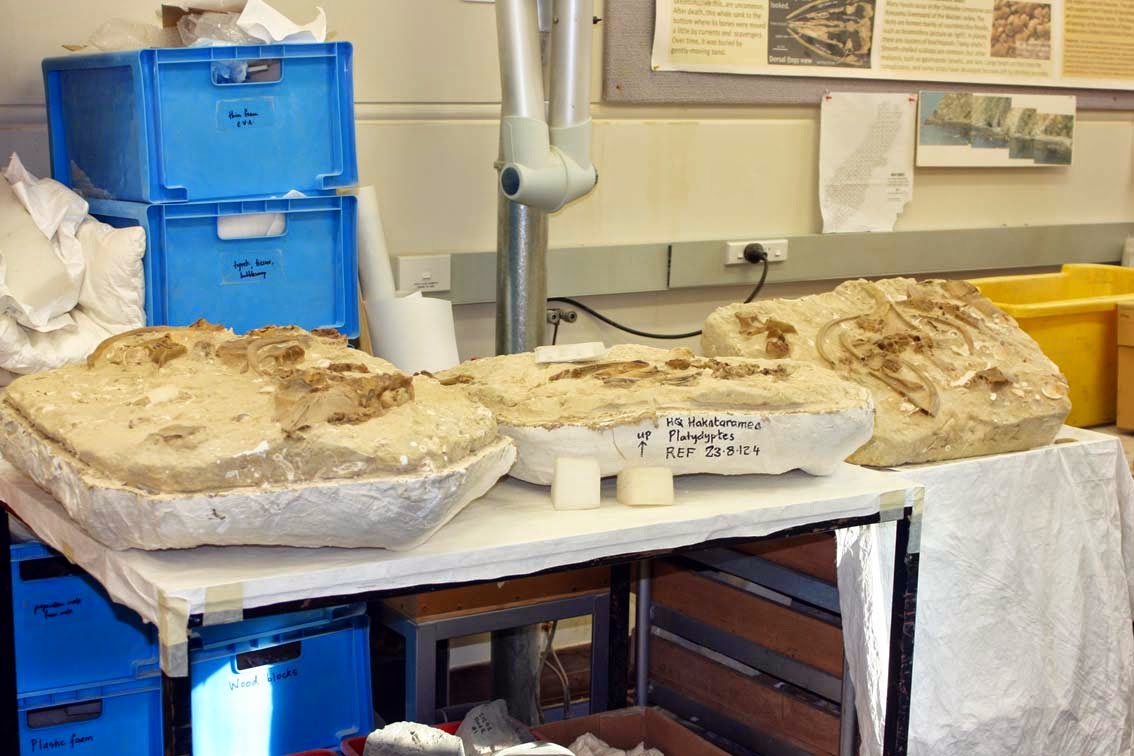 Three specimens already completed early on in the project - another small dolphin with partial skull and axial skeleton, in two blocks (left, and right). The middle block is a partial skeleton of a Platydyptes penguin including both humeri, radius, ulna, synsacrum, a bill, vertebrae, and I believe a femur and tibiotarsus (and maybe a tarsometatarsus?). Believe it or not, these two specimens and the very complete odontocete above were all found not only in a single day, but within an hour or so of looking around at the quarry. 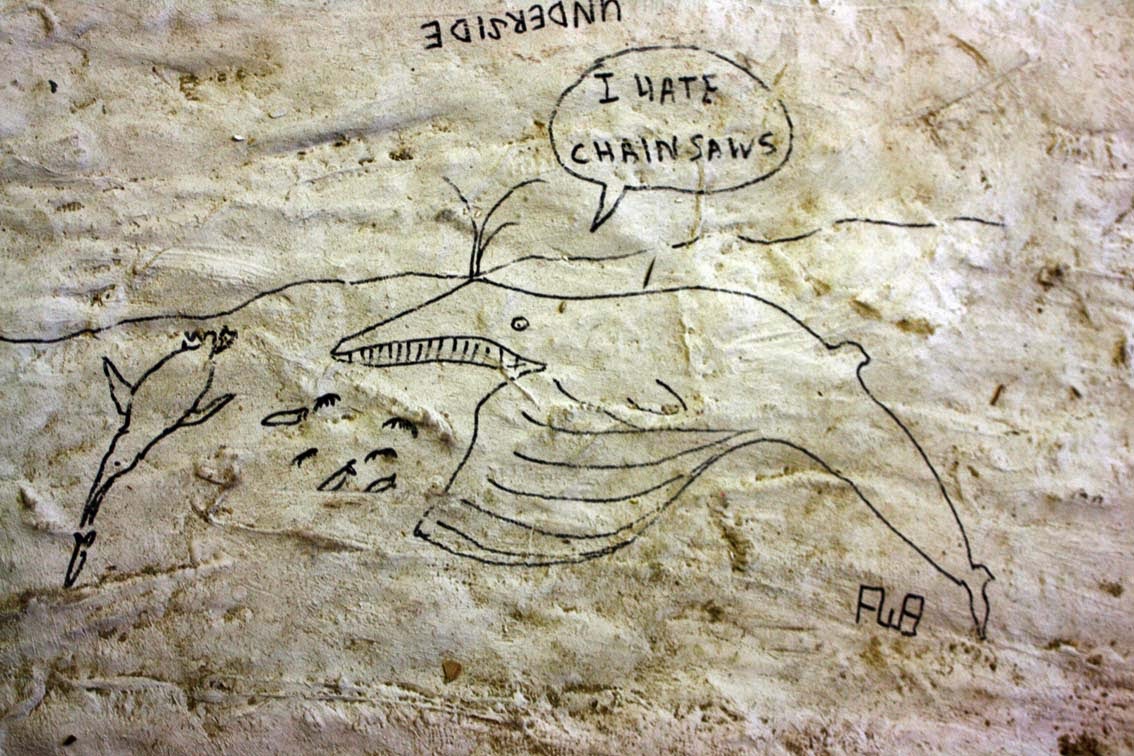 A quick jacket doodle I did in the field about a year and a half ago on a putative eomysticetid from the uppermost levels of the quarry. This specimen was found by Te Papa paleornithologist Alan Tennyson and Monash University Ph.D. student Travis Park, who had driven down from the North Island for the Southern Connections conference in Dunedin in January 2013. Jacket doodles like this are a tradition at Montana State University and Museum of the Rockies - but mostly feature unseemly beasts like dinosaurs. We fortunately don't have many dinosaurs in New Zealand, so I decorated our jacket with a far more appropriate animal. For the uninitiated, chainsaws are used in our program to quickly excavate large specimens: the rock is soft, and a chainsaw can cut through it like proverbial butter and reduce the amount of time spent at an excavation by 60%. 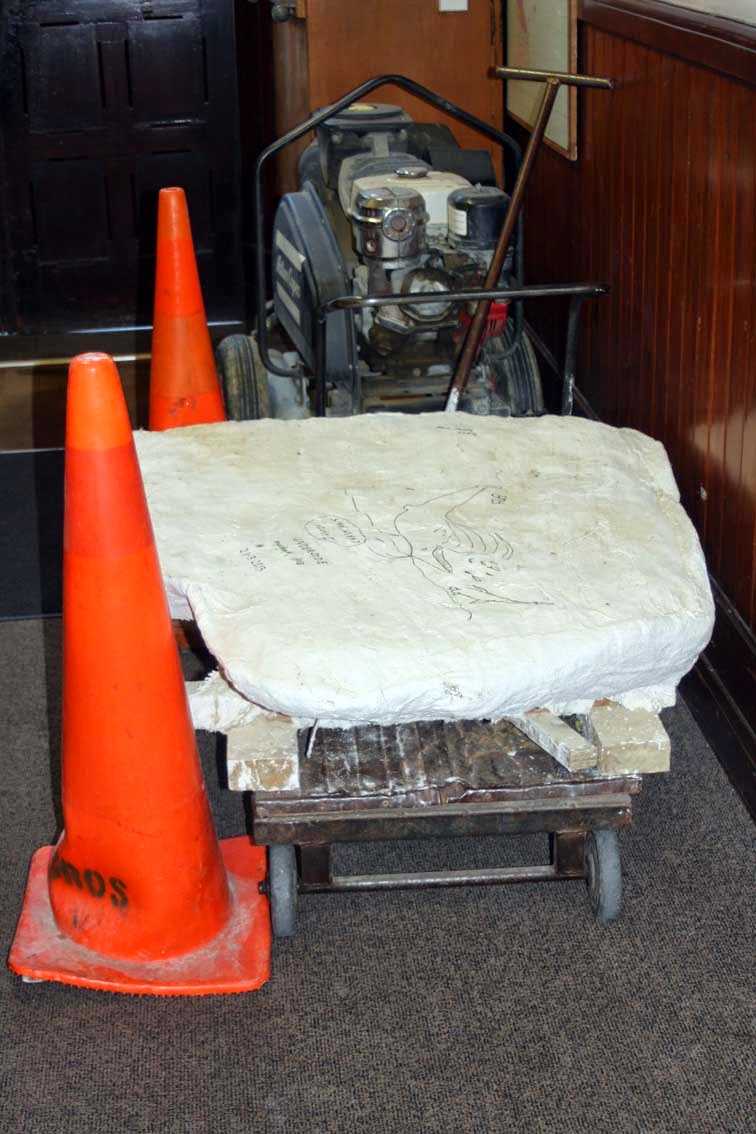 Here's that jacket. It has since been opened, and had a well preserved atlas (first vertebra), some ribs, a possible squamosal, two scapulae, and a partial mandible. Not terribly exciting, and fortunately not something I'll need to include in my thesis. 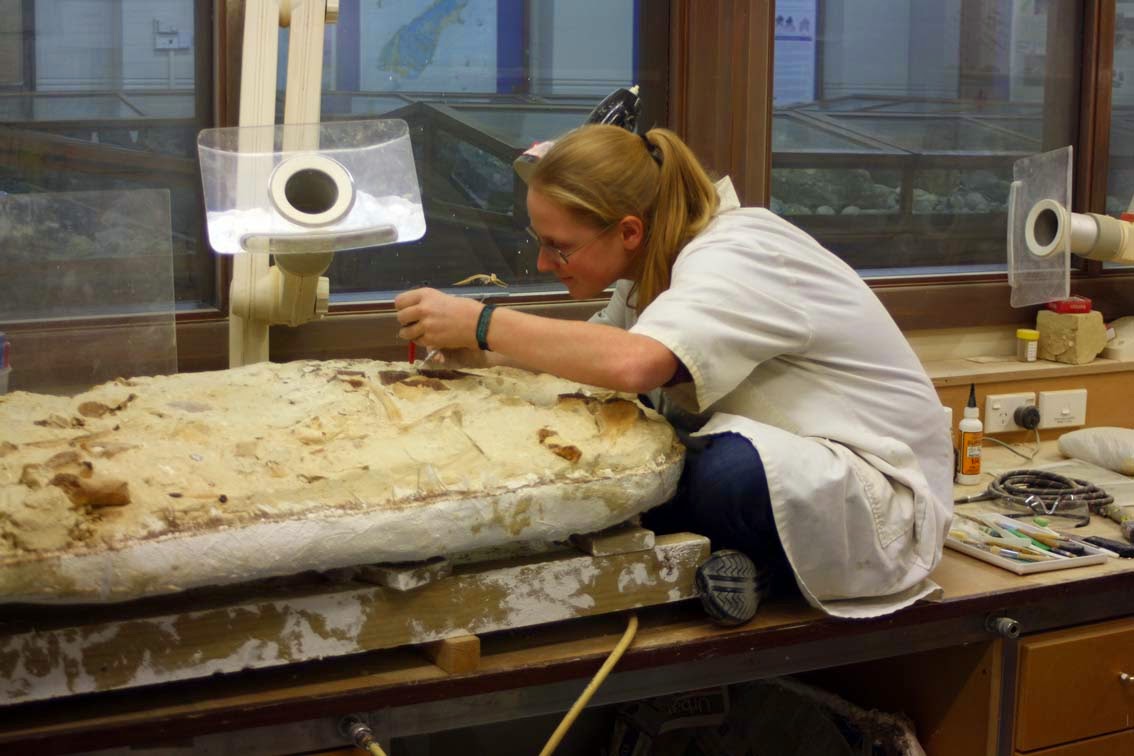 Master's student Nichole Moerhuis takes some time off from thesis work to relax in the lab and help do some therapeutic fossil preparation. The vertically challenged often discover elegant solutions to frustrating problems.

Posted by Robert Boessenecker at 5:28 PM No comments:

Last year I was contacted by my friend and colleague Mizuki Murakami (now Dr. Murakami), who wanted to commission an illustration of a fossil odontocete from Japan for a manuscript he was working on and planning on submitting to the Journal of Vertebrate Paleontology in the hopes that it would be accepted and selected as the feature article. To make a long story short, it was. The illustration depicts "Eodelphis" kabatensis - a fossil delphinid and possible ancestral globicephaline or orcinine (think "blackfish" in general) that was originally named in the late 1970's by Hideo Horikawa from the late Miocene of Japan. Horikawa originally named it as Stenella kabatensis, recognizing its delphinid affinities - but subsequent workers have noted it doesn't belong in the genus Stenella, referring to it with scare quotes as "Stenella" kabatensis. Mizuki's new study redescribes this fossil (consisting of a well preserved braincase, periotic, tympanic bulla, partial mandible, and hyoid) and gives it a new genus name: Eodelphis. Unfortunately as it turns out - Eodelphis is a preoccupied name for Cretaceous marsupial. So, it will require an additional paper proposing yet another replacement name. 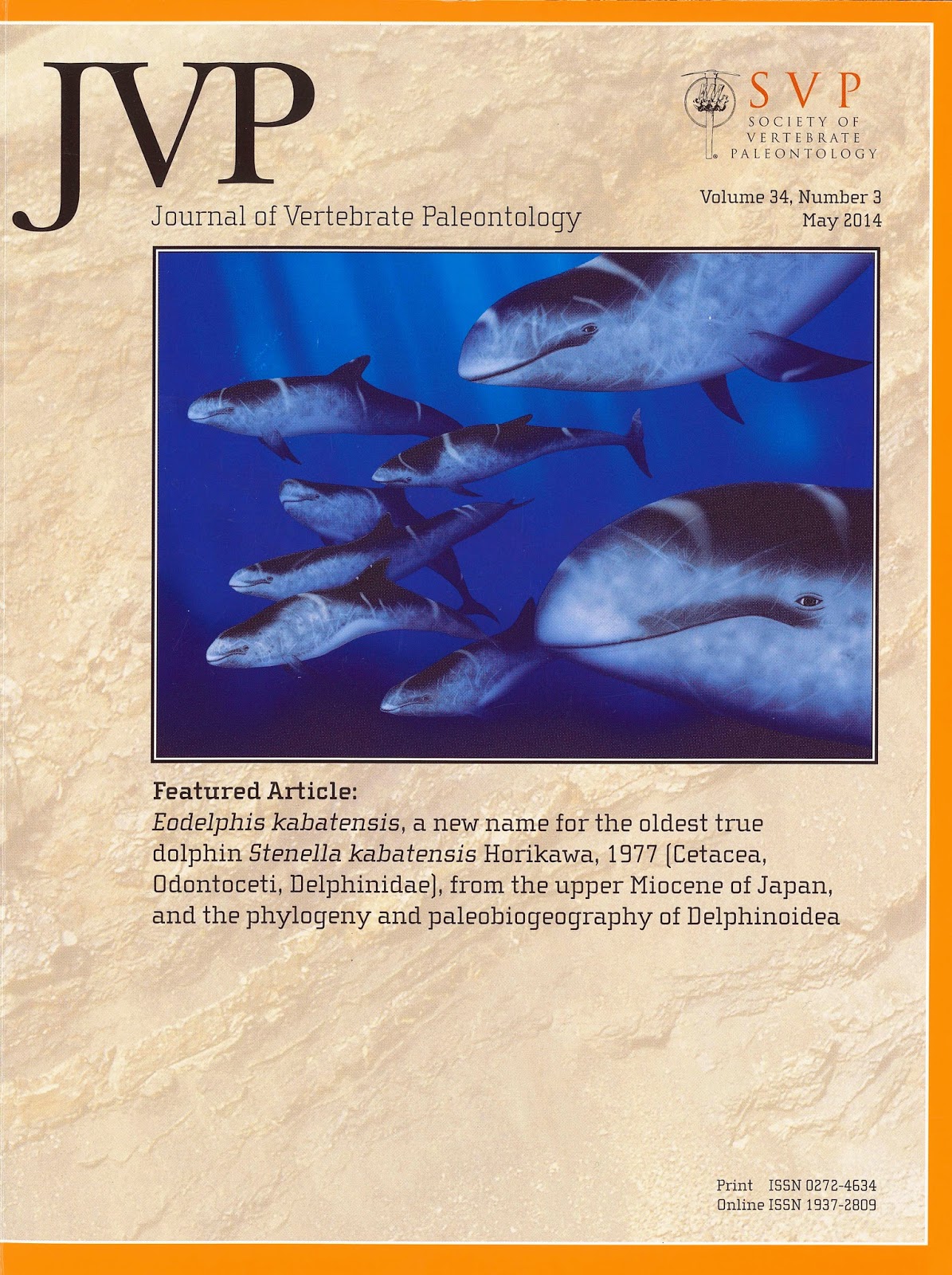 The cover of JVP with my illustration of "Eodelphis" kabatensis.

Eodelphis was found by Murakami et al. to be the earliest diverging member of the Orcininae, a tenuously supported group also including the modern killer whale Orcinus (and the fossil Orcinus citoniensis), the miniature killer whale-like dolphin Arimidelphis, and the robust bottlenose-like dolphin Hemisyntrachelus. Further work is needed to tell if this clade is genuine; other analyses of molecular data have been pretty variable in the placement of Orcinus. To reflect these relationships and the fact that Eodelphis would have probably been somewhat more generalized, Mizuki requested a dolphin with a body shape similar to the more "primitive" living globicephalines like the pygmy killer whale (Feresa attenuata), Risso's dolphin (Grampus griseus) and the melon headed whale (Peponocephala electra). The end result was essentially a mix of sorts of these three species - a plausible "look" for an ancestral large bodied delphinid (whether orcinine or globicephaline). 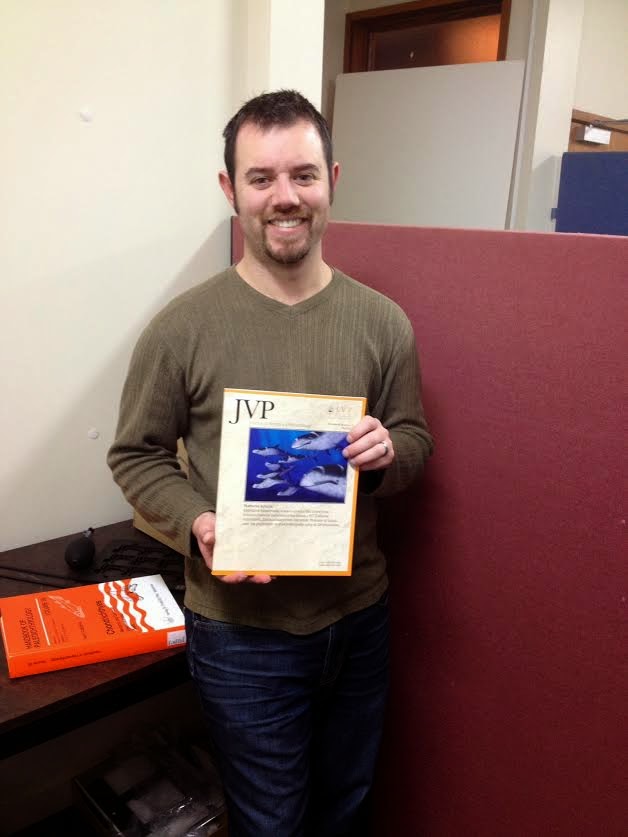 I was pretty damned happy to see a physical copy once it arrived here in Dunedin. I think this is my labmate Cheng-Hsiu Tsai's copy. I've had art show up in press releases before, but this is the first time my artwork has made it onto the cover of a journal. 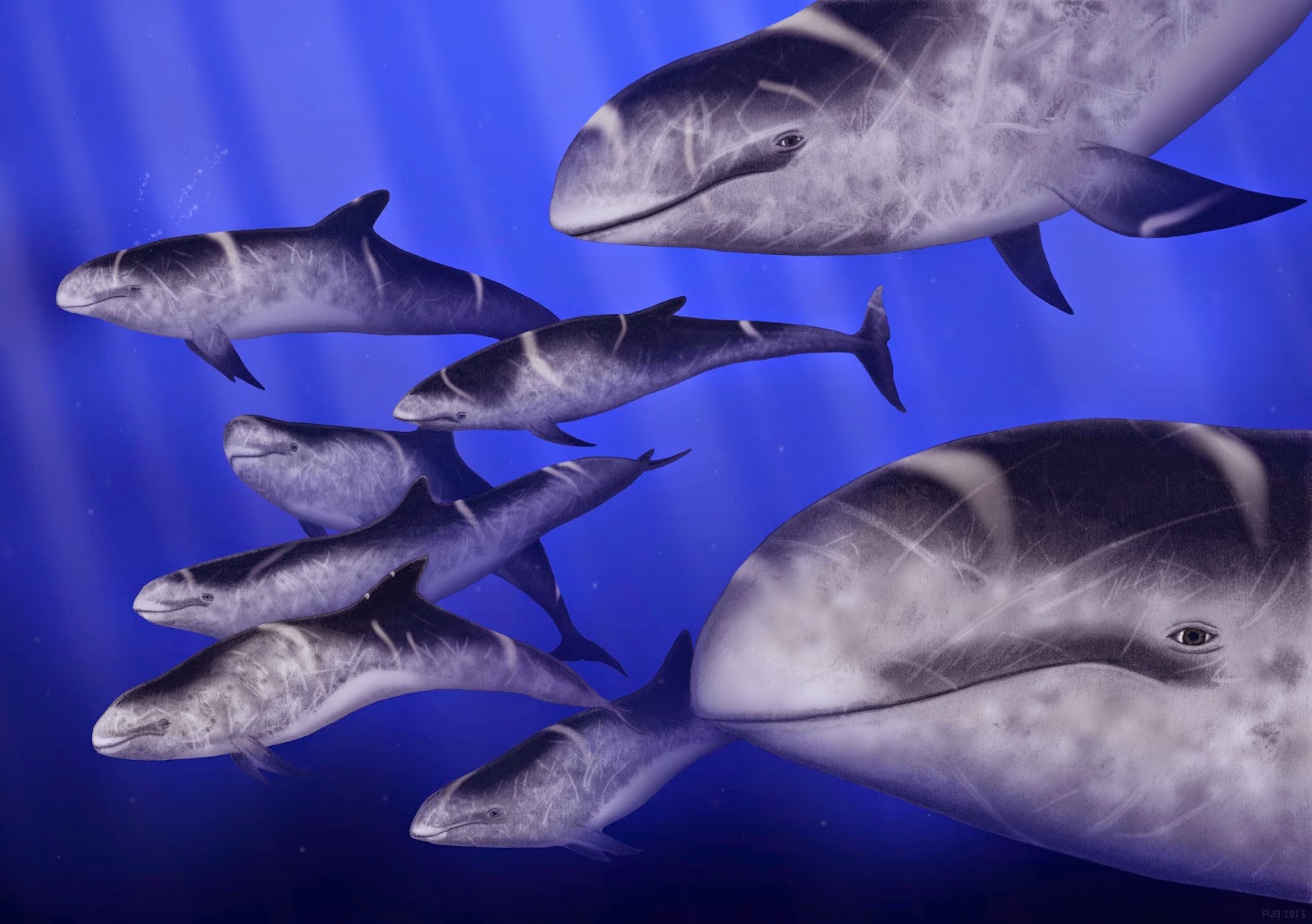 And, here's the original illustration.
Posted by Robert Boessenecker at 2:02 AM 3 comments: