The preeminent mammalian paleontologist Frank C. Whitmore, Jr. passed away at the ripe old age of 96 within the past few days. Whitmore is well known to the marine mammal paleontology community for his long standing research interests in fossil cetaceans, and I find myself regularly reading, re-reading, and citing his work over and over again (and it will probably stay as such for the duration of my career). Unfortunately, I never got to meet him in person, but many other older "students" of fossil marine mammals have - check out the link below for Butch Dooley's remembrance of Frank, which includes some biographical details.

Making the Move, Part 2: sights and sounds of Dunedin

Welcome from New Zealand! Kia Ora. We don't quite yet have internet at our house, so I'm typing this up on my nearly embarassingly small HP mini laptop on the wireless connection at the library on the U. Otago campus (the most spectacular library I've ever been in, might I add). Our lack of an internet connection is the reason that this post had to wait nearly two weeks; we initially had an internet connection at the flat we were staying at in City Centre, but after only 5 days we found a house we liked. We arrived on monday, and within 24 hours we had already checked out our first apartment (a bit of a dump and way too far from campus). We checked out another flat on wednesday - also a bit far, but it had an incredible view - but there was no grocery store within a mile, and it was up a flight of 300 stairs or so, and no access road you could ride a bike on (and up a huge hill). Thursday we checked out two places - one was a flat without a garden but a nice view, also on a huge hill, with no groceries - and the fourth place was a whole house with a cute yard, large windows, and only a little over a mile from campus (~25 min walk, 10 min bike ride). The house had a nice view (of a hillside, but not the harbor... or perhaps harbour), and after thinking about it for a bit, we decided to take it. And thus, we had found a great house and had completely moved in during our first week (in fact, on day 5 we signed the lease).

This post will be brief, but shows a bunch of pictures from our first day or two of sightseeing. Parts of it feel a bit like Europe, which is great, and many other aspects are totally unique or perhaps more like the US (Kiwis in particular are decidedly un-European, and have a familiar carefree, relaxed attitude that I am used to along parts of the California coastline). Anyway, enjoy the photos - the next post will have pictures of the Otago campus, which is just about the most beautiful college campus I have ever set foot upon, and I hope the next post will elicit much
jealousy from my friends and colleagues in the states... 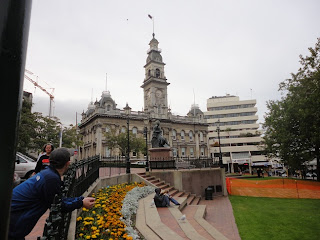 I can't remember the official name of this building, but it is basically the city hall of Dunedin. 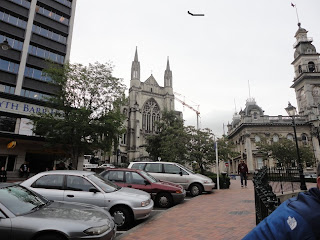 A cathedral next to city hall, at the Octagon. 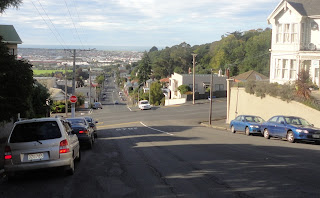 A view down Maitland Street where we were staying our first week. South Dunedin and the southern ocean is off in the distance. 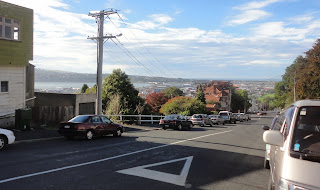 A view down another street I can't remember, instead looking a bit east, showing Vauxhall in the distance and the Otago Harbour. 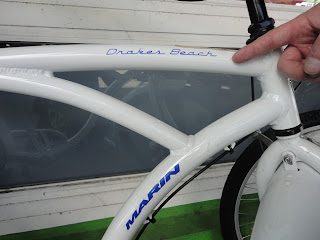 How weird - I flew nearly as far away from California and my field area as you can get, and I find a bike from the Marin Bicycle Co. called the "Drakes beach" model... 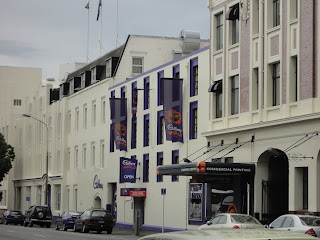 The Cadbury Factory, the chocalatey center of Dunedin, and the center of all Cadbury related operations in New Zealand. 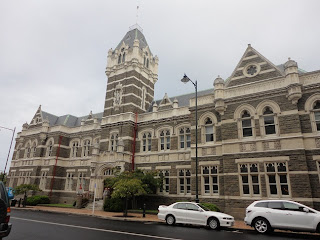 I think this was the local courthouse. It's near the famous train station. 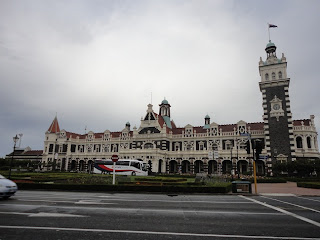 The famous Dunedin Rail Station. What a beautiful building! This is the starting point for the Taieri Gorge rail trip. 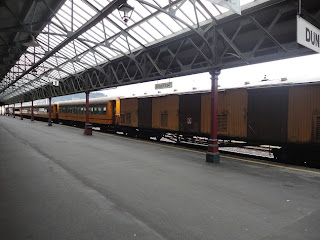 The other side of the Dunedin Rail Station. It reminds me a bit of the tracks at Bristol Temple Meads station, just scaled down and smaller. 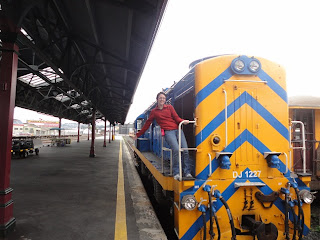 Sarah on board one of the trains. A Taieri Gorge train, perhaps? 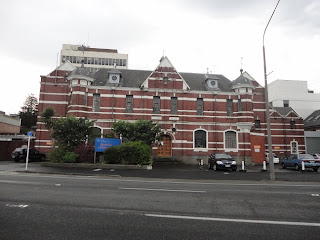 This pretty building had a no-nonsense sign labelling it as the "Dunedin Prison". I expected it to be historical, and maybe some sort of museum, until we peeked around the side and saw all sorts of concertina wire. 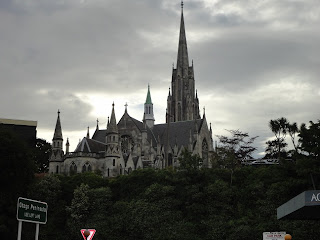 A really cool church in Dunedin - I believe this is the First Church of Dunedin. Don't ask me what denomination, I don't write that sort of stuff down. 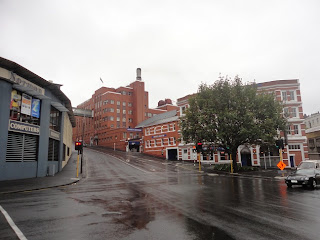 Lastly, the Speights Brewery! I've already enjoyed my fair share of the local brew favorite, Speights "Distinction", which is pretty damn tasty. I was also surprised to find myself in cider country, which was a wonderful discovery much as it was during my 2009 SVP trip to Bristol, England - which is also located in cider country. And damn, that stuff is stronger and tastier than I remember...
Posted by Robert Boessenecker at 9:37 PM 1 comment:

Making the move: 30 hours to the bottom of the world

Well folks, we made it! Six months of preparations finally culminated in our flight and successful move to the South Island of New Zealand. We left Saturday evening from SFO, and arrived on Monday afternoon (skipping sunday because of the International Date Line). So far, we've been here for three days, and already we have managed to pick up cell phones, open a bank account, get my registration started, check out four houses/apartments (and choose one!), explore campus, and have been able to explore a bit of the town. We've been walking anywhere from 3 miles a day to 7 miles (today, for example) and it has been quite the adventure. Here are some photos from the plane flight to start off, and later I'll show another post with pictures of the town, and another with pictures of campus to make everyone reading this from US university jealous (yes, everyone). The Otago U. campus has to be the most spectacular college I have ever seen. 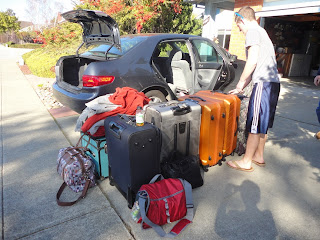 My brother and our large pile of checked and carry on bags. Some were way too heavy, and we needed to move some stuff from my heavy bags into Sarah's lighter bags. 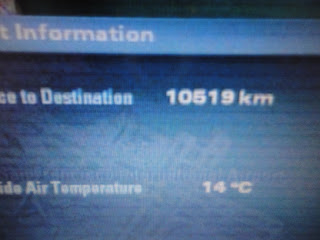 Well, crap. There's a long way to go still... taken on the flight to Auckland from SFO. This flight lasted 13 hours, and we had a 9.5 hour layover, and a second 2 hour flight to Dunedin. 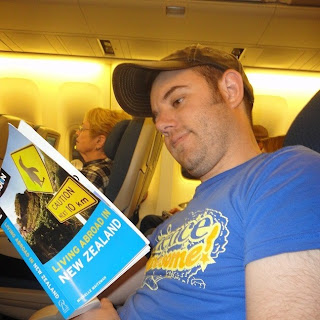 Now you can see how little time I had to prepare for this, due to trying to wrap up various research in California: I did not get a chance to read this book (kindly lent to us by fellow student Gabriel Aguirre-Fernandez) until I got onto the plane to New Zealand. 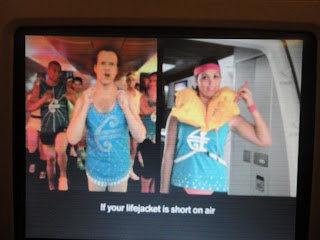 Yes, that is Richard Simmons about to tell us to "Blow and Blow". While the Richard Simmons bit was a bit intense and totally off the wall, this had to be the most entertaining airline safety video I've ever seen. 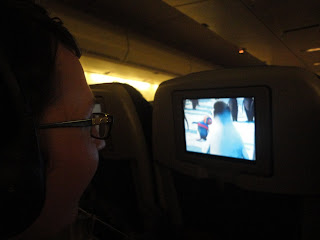 My wife, excited at the possibility of seeing penguins, watching Happy Feet 2 on the plane. 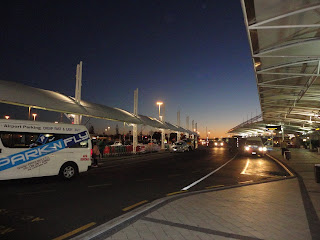 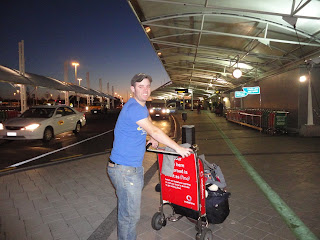 Pushing the cart of carry on luggage to the domestic terminal, which is located about a half mile from the international terminal - you're supposed to follow the green line. After sitting and sweating and feeling nasty for 13 hours, it was nice to get outside in the night air and move our legs. 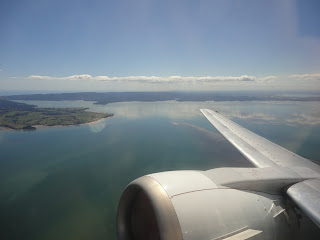 Finally on our second flight! This is looking southwest over the entrance to a large bay near Auckland, on the North Island. 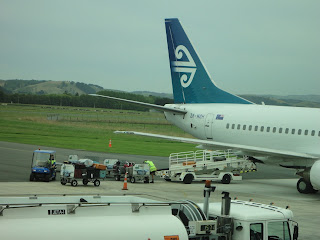 On the ground in Dunedin! Seriously, 1/3 of the stuff - including both suitcases coming down that ramp - are ours. 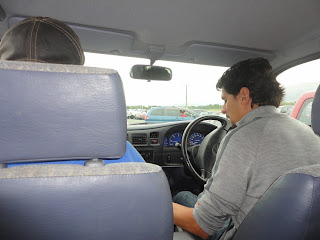 The driver's on the wrong side! This will still take a bit of time to get used to. Gabriel was kind enough to pick us up from the airport and drive us in to town, although I'll admit he had a pretty terrified look on his face when he saw how many checked bags we had to pick up.
Posted by Robert Boessenecker at 1:42 AM 1 comment: