Highlights from the Summer 2008 Field Season

While this blog is still in its infancy, I know I can say that most of my field seasons (whether they be summer or winter, or even spring break) cannot be summed up in one blog post.

Summer 2008 is the exception. The majority of summer 2008 was spent in a Calculus II course at College of San Mateo, hoping in vain (well... as I'm now a grad student... not completely in vain anyway) to pass. You see, I took Calc I at CSM the previous summer, and it proved to be a cakewalk, compared to the same class at MSU. At MSU, they use it as a weeder class to get rid of people who are mathematically retarded. In the case of MSU, there are a lot (and I mean A LOT) of engineering students, and our program is fairly strong here (whatever that means; I'll make negative comments about engineers in some other post in the future). So, that translates into a class that attempts to weed out engineering students. That would be fine, except that (GASP!) I am not an engineering student (thank god). You see, myself included, and many, many other paleontology students are plagued with being bad at math (I am actually rather proud that it is not intuitive; I guess I feel it shows that I'd rather think about things than play with a 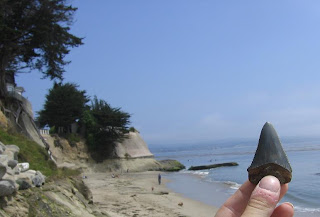 calculator or a slide rule all day [again, I'll save rant for later post]). In any event, Calc I here at MSU was practically impossible for me to pass. So I took it at CSM, and it really, really, REALLY paid off. I got taught the basics, and I passed.

Fast forward to Calc II. Calc II at MSU isn't so bad, but SVP 2007 kinda screwed that up last fall, so I dropped it, and then spring 2008 really kicked ass in Stats 332, without the prerequisite (thats right Dr. Boik, you asshat, I passed). So I expect a not-so-terribly-difficult time in Calc II. WRONG. I show up on the first day, and its this short dude with crazy white hair named Adolf Schender or some shit. Shortest Nazi I've ever met, anyway (and I knew a couple in high school). 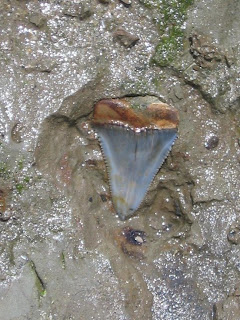 He passes out the syllabus, and I shit you not, on the front it has a subtitle called "Student Learning Outcomes." Then, below it, instead of just numbering them, or having bullets, or dashes or something normal, it says SLO1. As in "student learning outcome 1." Then, SLO2, SLO3, SLO4, SLO5, SLO6, and SLO7. What the fuck? Are you kidding me? I don't even remember some of the nazi-ass instructors at MSU pulling that shit, and this was at a goddamn community college. Anyway, the douche (er dude I meant) was a total asshole the entire class, and to summarize it I passed, and ya, so fuck that guy.

Oh, right, fieldwork. So this stupid math bullshit ate up 90% of my time all summer; at least the prior summer (2007) the class got out at 10:30 am, so I could drive out to the coast and actually have a cool life. This summer, however, the class got out at 1; granted, sunset's at 8pm, so I could have gotten 7 hours of work in, but I kinda wanted to be with my family a little bit too, ya know? So I could pretty much only go out on the weekends.

Which is why I only made it out to the coast five times the entire summer; thats usually the number of trips I do in a week and a half. Next summer will be different, where I'll be staying 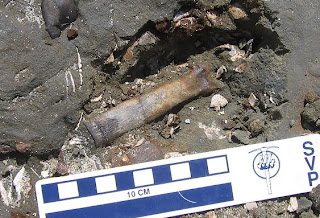 down in Santa Cruz for 3-5 days at a time (master's thesis fieldwork).

So... in the attached photos, you should see a picture of a bone in situ, and a big shark tooth. The shark tooth is none other than Carcharodon carcharias, or the great white shark. The bone is a phalanx from some kind of walrus (possibly a Dusignathine, or double-tusked walrus). Besides these, my friend Kim Wendell found a very nice juvenile Herpetocetus petrosal (i'll be doing several posts in the future about Herpetocetus, fear not). There should also be a couple photos from my field area. 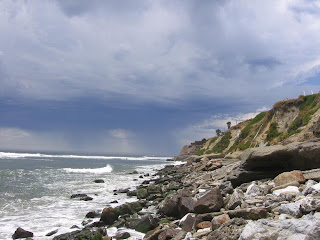 But... that was basically my entire summer. I usually found that amount of stuff in one or two day trips during the winter. It doesn't really matter, because I'll be going back and starting master's thesis fieldwork in a couple months, and will really be able to find some good fossils.
Posted by Robert Boessenecker at 5:53 PM No comments:

This (rather short) post is for my office mate Christina Carr, because she gets off on alluvial fans. This is an alluvial fan I photographed (in action!!!) this summer along the coast of Oregon. Based on the size, gradient, sediment, and geomorphology, this can be characterized as a debris flow fan. You can clearly see abandoned (and more importantly, unvegetated) depositional lobes, in addition to a new channel incision to the left of the old lobe.
Posted by Robert Boessenecker at 2:25 PM 4 comments:

2008 Meeting of the Society of Vertebrate Paleontology 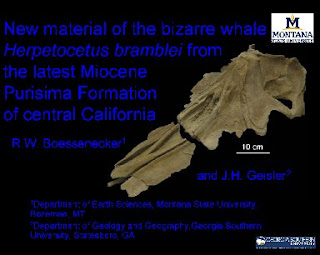 Sunday afternoon I victoriously returned from the 2008 meeting of the Society of Vertebrate Paleontology. On saturday I delivered my first ever oral presentation, on the enigmatic/bizarre fossil baleen whale Herpetocetus bramblei.

The presentation was largely a success; the only negative feedback I received was on my "rather unfortunate [if not tragic] choice of font color". Which is a damn good thing, once you really think about it; much of the world's entire discipline of cetacean paleontologists were all there watching my talk, save one american, two italians, and a frenchman. In any event, I only received good feedback on the scientific content of my presentation... which is awesome. Oh, and ya, Michael Novacek was in the front row (!!!). I only cussed once during my presentation, which is a bit of a milestone for me.

Other than the success of my talk, I realized that I had racked up a total of 10 hours of sleep for the entire conference (4 nights); that averages about 2.5 hours of sleep a night. Too many friends were present, that and our broken thermostat in our hotel room that ensured a constant frigid 50 degrees. So when I did return at 4am, I was kept awake by my own shivering.

Besides the lack of sleep, I was rather surpised this year by the amount of time I spent talking 1 on 1 with my "colleagues" (can I actually say that now?) instead of going to other posters or talks. I must have only gone to a couple of dozen talks the whole week, and I averaged 30-40 minutes at a single poster, so I probably only saw a dozen of those. In any event... I am returning from SVP fully energized about research, with new projects (gulp) in hand with new colleagues.
Posted by Robert Boessenecker at 12:13 PM 2 comments:

We'll see if I have enough time this semester to make this worthwhile. I hope to at least have one or two posts a week. We'll see, I guess!
Posted by Robert Boessenecker at 1:49 AM No comments: