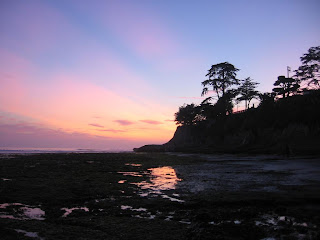 Ahh, this is why I love California. Especially my master's thesis field area. These are some tidepools exposed during a minus tide at sunset; Monterey Bay is the body of water to the left of the picture. 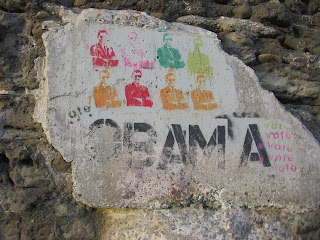 Yes... I'll use this to gloat about the election more. I'm happy the denizens of Capitola are happy about it to. You can actually see this paint job on photographs taken from aircraft:http://www.californiacoastline.org/cgi-bin/image.cgi?image=200810789&mode=big&lastmode=sequential&flags=9&year=current
Look at the base of the wall about midphoto, at the left end of the long lawn in the middle of the picture. I love the sunglasses that were added. 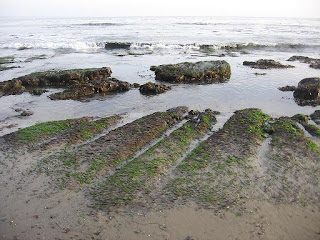 Here were some very odd linear features in the wavecut platform, which is an exposure of the Purisima Formation. Linear features such as this have been documented before in a similarly aged sedimentary unit of similar composition, the St. George Formation of Crescent City, in northernmost California. However, there the features were attributed to tsunami scouring by the transport of large boulders up and down the beach, in a direction normal to the shoreline. That is a north facing coast at Crescent City, and was susceptible to tsunamis from earthquakes in Alaska. However, this shoreline at Capitola, CA, faces south; what caused these features will likely remain an enigma. 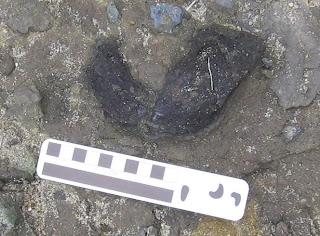 Here is an atlas vertebra of a small mysticete whale preserved in the Purisima Formation. The atlas is somewhat similar to Piscobalaena and Herpetocetus, and likely belongs to the latter or a similar whale.
Posted by Robert Boessenecker at 3:05 PM No comments:

I have successfully navigated, conquered, and left the seventh level of hell

As in my first semester of graduate school, which was pretty damn tough, but a challenge nonetheless. In any event, finals are over, and my first real break from it has started... I... don't know what to do with all my free time! Its amazing... Anyway, expect more activity on here than what has been recently.

Happy finals!
Posted by Robert Boessenecker at 2:52 PM No comments: