Recently Mark Goodwin at UCMP (University of California Musuem of Paleontology) at Berkeley (aka Bezerkeley) invited me to write up a short post for the UCMP Blog detailing my undergraduate field research. After five years of preparation, the material is finally ready for curation. Actually, most of the material was prepared several years ago, and the one remaining specimen was the balaenopterid cranium that took ~5 years to prepare.

Anyway, you can read the post here on the UCMP blog.

I apologize for being relatively unproductive on here recently; I've been pretty busy since the end of the semester, trying to get preparation projects wrapped up, and sleeping in, now that I can. Soon I'll do some posts about a new Herpetocetus skull I've been preparing for the last couple months - in fact, I'll have it completely finished on Monday, and boy is it pretty.
Posted by Robert Boessenecker at 1:40 PM 1 comment:

As promised, here are some photos of the skull that was discovered on thursday and excavated by the following monday. I apologize for the lack of posts lately; I've been damn busy the last few weeks, wrapping up my first semester of teaching, finishing classes and finals, and getting a lot of typing done; over the weekend I submitted a manuscript (my third now) to the Journal of Vertebrate Paleontology on some fur seal fossils from Humboldt County, California.

Anyway, Karl Heiman took all these photos and graciously let me pirate them and put them up here. Thanks Karl! 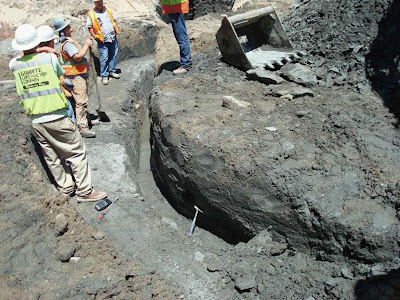 The skull is somewhere down in that trench the excavator dug. I imagine that's Dave Maloney up front, I can see one of the two lead engineers (both pretty cool guys). You can see that this fossil was only about a foot or so down below the wave cut platform; I must have walked right above this thing hundreds of times. 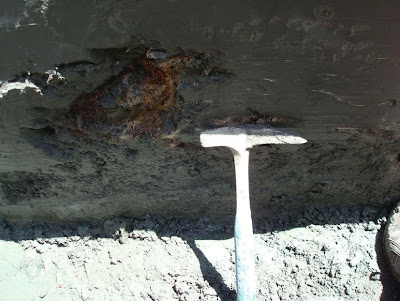 Here's all the bone that was poking out initially. Pretty ugly if you ask me. This is what you have to start with from heavy machinery - it often fractures a small zone of the bone. Waves and the fiercest winter storms are decidedly more gentle, and can expose bones that look nice enough to warrant collection. Nevertheless... 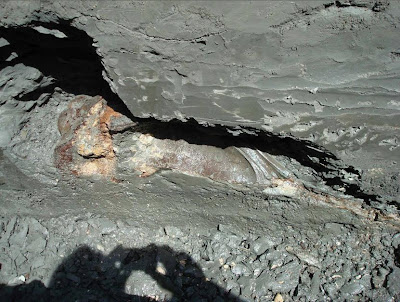 Hey, there's something there, all right! This is one of the first photos I saw of the thing, and I got pretty excited, and nervous; it looked like the trench had cut obliquely across the rostrum. 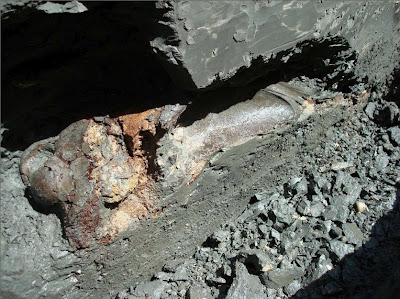 And further posterior at this stage of the excavation. You can see the occipital condyles to the left; a bit of the right side is gone, and it isn't clear what angle the cut goes to - obliquely to the left across the entire skull, it would seem. 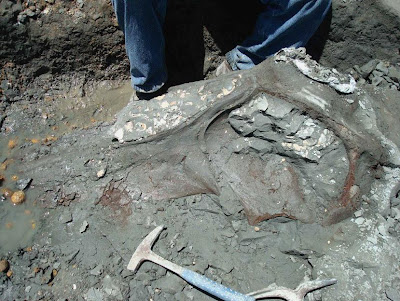 Wow, I'm impressed - the left side of the skull looks beautiful. You can see much of the left maxilla, left frontal, and left squamosal here. 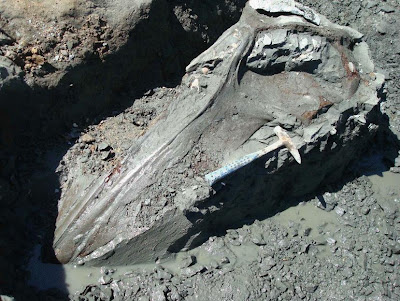 Holy cow! Here's the money shot. This thing is just beautiful! Fortunately, the trench went exactly parallel to the long axis of the skull, and didn't even cut across the rostrum; the anterior tip of the rostrum is intact, and aside from some minor damage to the left maxilla, is more or less complete (on the left side). 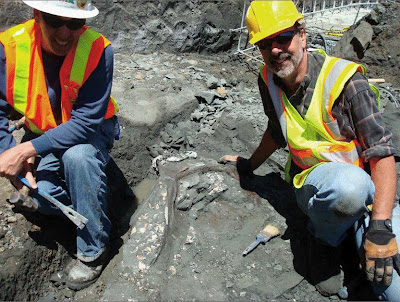 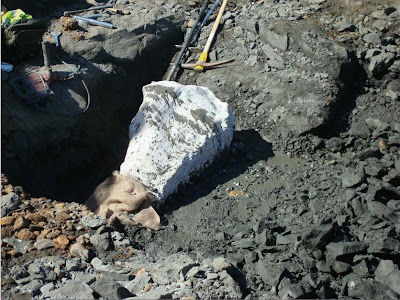 At last, the plaster jacket is on the fossil. Apparently not two minutes after 5:00 Karl and Dave got the jacket on, a large wave came in and filled in the hole, which is now the size of a swimming pool. The specimen is probably now on its way (or already) to the prep facility. Luckily for these guys, the sediment is really soft and separates from the bone easily, and should make for a really easy prep job.
Posted by Robert Boessenecker at 12:18 PM 2 comments:

Thursday evening I received an email from by buddy Karl Heiman, who co-discovered a mysticete skeleton at a seawall construction project last April; the skeleton was headless, but nonetheless is a beautiful find (the excavation was conducted by PaleoResource Consultants and covered here and here). Anyway, on Thursday, as part of the same project, Karl was watching as a backhoe dug a trench, and the bucket chewed right through a rather large bone.

After some careful digging, it turned out to be a nearly complete baleen whale skull - photos he sent me yesterday show what it looked like after it had been entirely excavated in the field: about 5 feet long, and only missing part of the right hand side - the left side of the skull is largely intact. I'll email Karl and ask for permission to use his photos, but otherwise - trust me, it's damn pretty; I almost shed a tear.
Posted by Robert Boessenecker at 1:55 AM 2 comments: