I've got quite a bit to catch up on from this summer - I've been busy (too busy, in fact). So, here's a selection of photos from the first part of our vacation back in the USA. We didn't waste much time heading back out to some choice localities in Halfmoon Bay. However, the drought and lack of erosion/storms has really taken its toll on local fossil sites, and as a result the beaches are high and the fossils hidden under a year's worth of dust and grime. 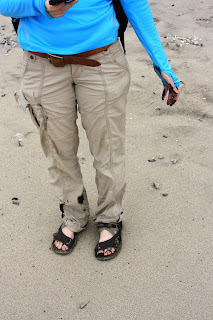 Sarah had a bit of a spill on the way down to the beach - in one gulley there was a thin layer of sand overlying (and hiding) a thicker layer of mud, which she jumped down onto from a log. 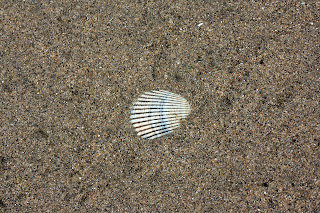 A Clinocardium cockle peeking out from the sand. 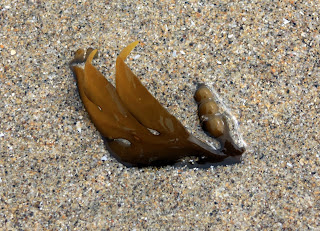 A pretty fragment of bull kelp sitting on the beach. 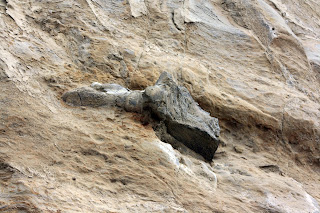 Several years ago I spotted this huge thing weathering out of the cliff about 25 feet above the beach. I got a better photograph of it in the field, and finally figured out what it is. I always knew it was some sort of a huge cetacean skull, probably baleen whale, but couldn't make heads or tails out of its shape.

Here's a marked up version of the photo. This clearly shows that it's the posterior end of an upside-down baleen whale braincase- likely a balaenopterid whale - poking out, with some of the left braincase broken away and missing. The condyles, foramen magnum, right exoccipital, and even a tympanic bulla are evident. Judging from how far up this is, the skull is well over a meter wide, putting it somewhere in the size range of a Sei whale (Balaenoptera borealis). This specimen is a bit of a heartbreaker, because it would be impractical - if not impossible - to safely collect. People have seen this photo and suggested ropes, scaffolding, jackhammers, and all sorts of wild ideas but the simple truth is 1) digging that far in would likely trigger a cliff collapse and 2) far more easily collectable specimens are waiting to be collected on other beaches, without the need of all sorts of equipment I don't have the training or funding to operate. 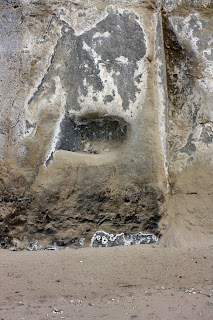 This hole was dug five years ago by my field assistant/fossil buddy Chris Pirrone (attorney at law), and yielded a beautiful little "river" dolphin skull with a partial rostrum, mandible, and left and right tympanoperiotics which I referred to Parapontoporia sternbergi in my 2013 Geodiversitas paper. 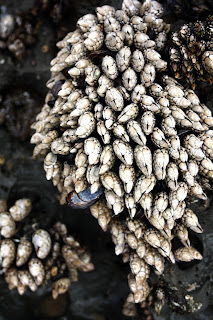 Gooseneck barnacles and a single mussel poking out. 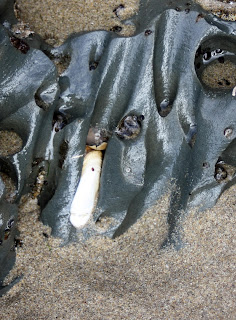 A piddock clam whose rocky home is being eroded more quickly than it can bore, beautifully showing how it forms boreholes. 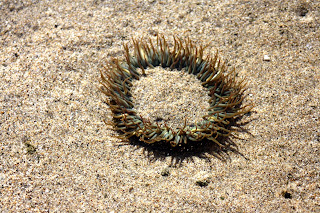 A large green anemone lightly dusted with sand from the last high tide, within a shallow sandy tidepool. 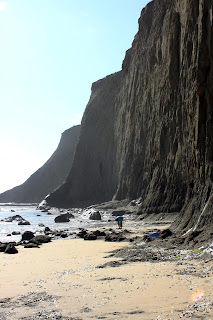 View of the dramatic cliffs of Purisima Formation at the northern side of Tunitas Beach - one of the most scenic beaches in Halfmoon Bay, if not also one of the dirtiest; it's difficult to get to, and most people who go there to have barbecues and drink leave all of their trash in kind of a big heap at the bottom of the trail. 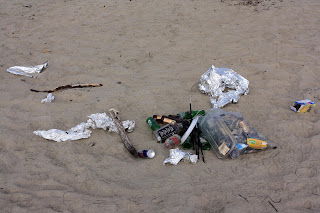 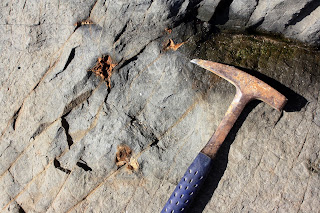 Vertebrate fossils here are rare - this was my first discovery - a couple of associated dolphin vertebrae. The rock was far too hard to even think about removing them. 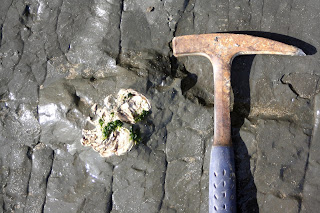 Invertebrates are not rare, however, and clusters of the slipper shell Crepidula princeps are quite common, such as this rather nice example. 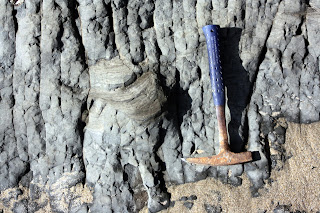 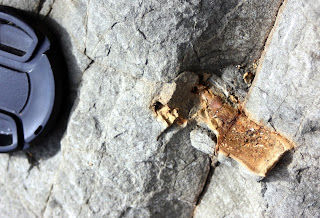 Here's a thalassinidean shrimp claw, complete with the dactyl and chela. 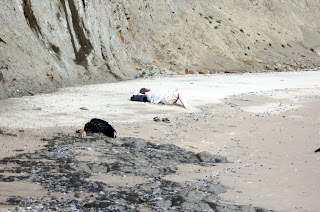 My wife hard on the search for fossils.
Posted by Robert Boessenecker at 3:14 PM No comments:

It's been a while, and a lot has happened since I took a bit of a break. All good, mind you. I took a break from blogging in March so that I could focus on something that was a tad more important - finishing my Ph.D. I submitted my doctoral thesis for external review in February. At Otago and elsewhere in NZ, the Ph.D. finalization process is a bit more hair-raising than in the USA. In the USA, you give your committee (mostly all in your deptartment, with perhaps one external reviewer) weeks before your defense date; they read it, and at your defense, give you a list of final corrections to make - and upon completion, you submit the final thesis and you're basically done. The point is, you pick the schedule. At Otago, all reviewers are external (at least for our lab's research, since there aren't really any other cetacean morphologists in New Zealand). When you submit, your scholarship stops, and you have the option of starting a publishing bursary - which has a maximum of three months. So, you hope that your reviewers are kind enough to get their reviews back to you before your funding runs out, as you either have the choice of 1) leaving the country before your reviews come in or 2) living in a cardboard box in an alleyway and waiting (NZ is prohibitively expensive).

Initially I had opted for option 1, and in fact had already bought my plane tickets when I heard that my reviews were miraculously coming in two weeks before I was set to fly home and we scrambled to get a Skype Ph.D. defense set up. Other students had to opt for option 1, and some reviewers who couldn't be bothered took longer than three or four months. Fortunately I didn't have to worry about that, as all of my reviewers kindly returned their commentary within two months. A week and a half after passing my Ph.D. oral exam, Sarah and I hopped on a plane and headed back to the USA - where we were immediately amazed not only at the nice weather (winter in California is often better than summer weather in Dunedin) but also at how cheap groceries are (we spent on average 200-300$ on groceries a week).

We didn't wait long until we went out to do summer fieldwork along the California coast - we've gone out and visited fossil sites in Halfmoon Bay, Santa Cruz, Marin County, and Mendocino County, as well as going to Lake Tahoe, Monterey Bay, San Francisco, Berkeley, and other great spots. I'll be doing a series of posts on summer paleo adventures soon. 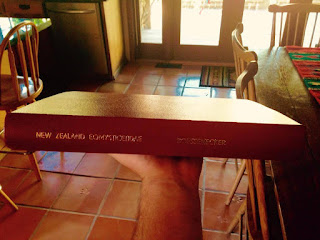 Special delivery from down under: big beautiful hardbound copy of my thesis, in red!


Last week I found out that my thesis was formally accepted by the school and that I will in fact be graduating on August 15, after which I will be Dr. Robert Boessenecker (thank you very much), and that my thesis will be added to the "List of Exceptional Doctoral Theses" for the University of Otago Division of Sciences - a prestigious designation given only to the top 10% of theses in the school (so, basically I got an "A" or "A+" on my last piece of schoolwork ever). Let me explain why that's amazing: I was a D average student in high school, and perhaps a C average student my first few years of my Bachelor's program. I was never a good student until the end of my undergraduate career; I think the first time I ever got a 4.0 GPA was during my master's program (and, at that, only got a "B" in a single class during my master's - the only blight on an otherwise perfect record). So, it's really just been the last 6-7 years or so. They say graduate school is harder - and in some ways, it is - but because I actually care about the subject, I pour my heart and soul into it (maybe too much, in some cases), and so regardless of how hard grad school is, in most ways it just became easier and easier. 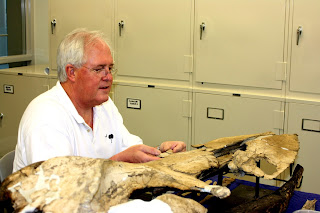 Museum curator Mace Brown with one of the Charleston specimens I'll be working on - an adult eomysticetid skull, possibly Micromysticetus rothauseni.


Which brings me to my last and final statement, er announcement, really. In two weeks, Sarah and I will be packing up everything from our brief tenure in California to drive to the east coast, where I'll start my first job as an adjunct instructor in geology and paleontological researcher at the College of Charleston in South Carolina. The position started out as a postdoc offer to study fossil cetaceans from the Oligocene of South Carolina that are in College of Charleston collections, and was upgraded to an adjunct position which will give me a good opportunity to get quite a bit more teaching experience. We're looking forward to moving down south; I've already been to Charleston, and fell in love with the place after being there for an hour. I've updated the title of the blog; no longer being down under, and soon to be in Dixie, the name of the blog is now "The Coastal Paleontologist - Dixie Edition".

More to come - stay tuned for some coverage of our summer paleo adventures!
Posted by Robert Boessenecker at 2:11 PM 1 comment: