A Cretaceous crabeater seal from New Jersey? The mystery of Lobodon vetus


I've never done an April Fool's blog post before, as I'm probably not witty enough to produce something really clever. So instead, I'm going to give a brief discussion of a very confusing fossil mystery which, for all I know, may have began as an April Fool's prank.

Lobodon vetus was originally reported as being similar to Stenorhynchus serridens - a junior synonym of Lobodon carcinophaga, the extant crabeater seal. Extant Lobodon has bizarre teeth with extra cusps with spaces in between them that, when the jaws are shut and the teeth are in occlusion, form a dental filter. Crabeater seals - and the leopard seal - use a combination of suction and filter feeding in order to suck individual fish and krill into their mouth and then jet the extra water out between their lips, a behavior which has become much more clear in the last few years thanks to recent research by my Australian colleague David Hocking (and others, 2013). None other than preeminent American paleontologist Joseph Leidy named the species Stenorhynchus vetus (now Lobodon vetus) in 1853. The tooth's similarities to lower cheek teeth of modern Lobodon cannot be denied (Ray, 1976). 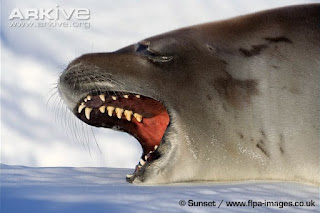 
Unfortunately, it appears that Leidy never actually saw the specimen. The tooth was collected from "greensand, of the Cretaceous series, near Burlington, New Jersey" by Samuel Wetherill, who gave the tooth to a Mr. Conrad, who illustrated the specimen, and showed the illustration to Leidy, who subsequently published the illustration. Subsequent pinniped researchers expressed guarded skepticism about a Cretaceous age - and even Leidy mentioned in other works that it was likely from Miocene deposits or possibly even Pleistocene in age. In his first major foray into tackling the badly confused fossil record of pinnipeds, Kellogg (1922) considered the occurrence to be dubious (p. 90) but also remarked that subsequent discoveries had the possibility of vindicating such a claim (p. 67) - I imagine that the limited fossil record of carnivores (and certainly pinnipeds) did not completely rule out such a ancient age (a problem that continues to plague pinniped paleontology to this day, with bizarre claims of early Eocene phocine seals). Of course, no subsequent discoveries have ever duplicated Lobodon vetus. 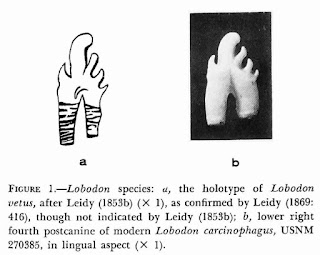 The original illustration of Lobodon vetus alongside a photograph of
extant Lobodon, from Ray (1976).

Clayton Ray (1976) remarked that finding a tooth of an Antarctic lobodontine is perhaps even more of a stretch than a claimed Cretaceous age, given that (at the time of his writing) the coastal plain stratigraphy of New Jersey was quite confused and the "geologic age of many fossils...subject to gross misinterpretation" (Ray, 1975:296-298). Ray (1976:3) viewed that the presence of "a crabeater seal in the North Atlantic of any geologic age is inexplicable". Leidy was evidently cognizant of this problem, given that he even proposed that "it may have belonged to a cetacean allied to Basilosaurus" and other researchers tried to explain it away as a taphonomically damaged shark tooth.

Ray (1976) presents the most detailed summary of the enigmatic Lobodon vetus, ultimately stating that we can't really say more until additional material is found. The phocid record from the Atlantic coastal plain is quite good in places, but the published pinniped record is by no means anywhere near as densely sampled as for the west coast - which, as recently as just two years ago, produced "hidden" fossils of early fur seals like Eotaria crypta (Boessenecker and Churchill, 2015). It's possible some teeth may be discovered in the future, but surely at least one distinctive tooth would have popped up in a fossil collector's screen someplace, or found on a beach? Amateurs on the east coast, particularly in Florida, North Carolina, and the Chesapeake Bay region, are quite keen and readily aware of different types of marine mammal teeth.

The fact that Leidy never saw the original specimen, and that the original specimen was lost before he published the illustration, I think is quite telling. We have virtually no provenance for the specimen, and we can't even confirm that the specimen is A) even a fossil or B) even real. Could it have been an illustration copied from a published scientific plate? Could Conrad and Wetherill have played a fast one on Leidy? Did someone with some knowledge of mammalogy play a bit of a prank, the joke being lost on Leidy? This is one option. Another option is that the specimen was real, but a modern tooth - perhaps stained somehow. Leidy likely would have known the difference between a fossil and a modern specimen, even if accidentally stained, stained in utero, or even painted to fool him (if foul play was involved).