Sorry about the "short" delay; the last week or so has been pretty rough, between my Paleobiology course, getting sick, and administering/grading my first exam. But, all of that's over now, so I've been able to allot some time to this again.

My last post concerned paleopathology and histology of the "cetothere" Diorocetus hiatus, published by Brian Beatty and Alton Dooley last summer in Jeffersoniana. In it they posited that Diorocetus may have been a benthic feeder based on peculiar pathologies as well as an interesting pattern of rib osteosclerosis. 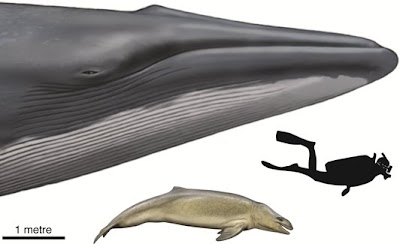 Comparison of the size of Mammalodon and a blue whale. From http://museumvictoria.com.au
There's been some buzz in the science blogosphere recently about the truly bizarre Australian toothed mysticete Mammalodon, the subject of a new monograph by colleague Erich Fitzgerald. I'll admit I've been anticipating this paper since Erich's talk at SVP in 2008 (the same session as my first ever SVP talk, you know, the one where no one could see any of my text). Some other blogs have covered Mammalodon already, but mostly just some of the stuff you already hear in the news; ya, it was a mysticete with teeth (all toothed mysticetes look pretty weird), and it likely a benthic suction feeder, so what? There's far more interesting 'meat' in the paper, if you will, that someone who wasn't a mysticete worker and therefore didn't have time or interest to read 110 pages might not pick up on. Okay, I didn't read the description, but I've read the in depth discussion. 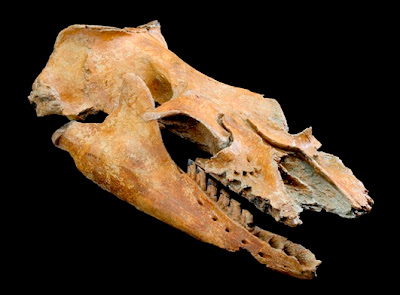 The skull and dentary of Mammalodon. From http://museumvictoria.com.au
Mammalodon colliveri was originally described in 1939 from the Oligocene Jan Juc Formation of Australia, although it was not identified as a toothed mysticete until the 1980's when Ewan Fordyce (U. Otago, New Zealand) undertook additional preparation of the fossil. In 1966, Doug Emlong (an extremely prolific and gifted amateur collector) described a peculiar toothed cetacean he discovered in the Oligocene of Oregon: Aetiocetus cotylalveus. Emlong thought it was an archaeocete, but Leigh Van Valen soon after recognized several mysticete features. Toothed mysticetes may seem odd at first, but when you think about it - 1) teeth are primitive for cetaceans and indeed mammals, and 2) they had to eat with something before baleen evolved. Mammalodon shares many similarities with Janjucetus, including a short rostrum, short triangular supraoccipital, and large orbits; however, Mammalodon is distinct in having laterally oriented teeth, and a relatively flat rostrum. 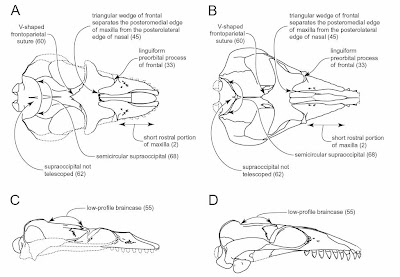 Comparison of Mammalodon (left) and Janjucetus (right). From Fitzgerald (2010).
Mammalodon has some strange features - a short, flat snout, large, upward facing orbits, large foramina on the maxilla, upper teeth that project laterally, and peculiar wear facets on the lower dentition that look like they were filed down at the same time (so to speak) - i.e. they share wear facets oriented on one single plane. Some authors have interpreted the denticulate teeth of basal mysticetes like Llanocetus and Mammalodon to have had a role in filter feeding, much like the teeth of the extant crabeater seal (Lobodon carcinophagus). Fitzgerald (2010) rejected this interpretation, as he did earlier (2006) for the tooth morphology of Janjucetus. Based on the probable presence of hyaline cartilage in the jaw joint of Mammalodon (as opposed to fibrocartilage in lunge feeding balaenopterids), Fitzgerald also rules out lunge filter feeding. Bony correlates of baleen, nutrient foramina, are absent on the palate of Mammalodon, suggesting that it did not possess baleen (such as later diverging aetiocetids - I'll talk more about those next time). Taken in full, few features of Mammalodon suggest filter feeding, rather than raptorial/pierce feeding (aka, biting stuff). Aside from this, some of the features unique to Mammalodon such as the very short rostrum, large maxillary and mandibular foramina, and extreme tooth wear suggest an alternative behavior. Typically, large foramina indicate improved blood flow and innervation to a region; for example the tactile whiskers of pinnipeds are correlated with a greatly enlarged infraorbital foramen (a pinniped synapomorphy), relative to "fissipeds". In this case, the short rostrum, probable highly innervated oral region, and wear most likely due to substrate interaction, all point towards benthic suction feeding. Additionally, the up-and-forward facing orbits would have conferred some degree of binocular vision, similar to the walrus and the bizarrer walrus convergent odontocete, Odobenocetops. 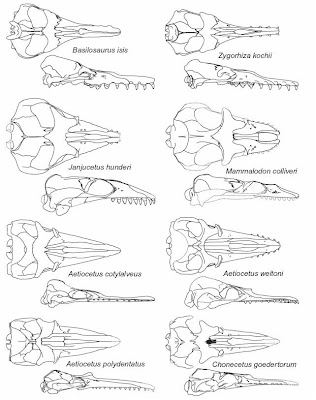 Various archaeocetes (top row), mammalodontids (second row) and aetiocetids (bottom two rows). From Fitzgerald (2010).
Most interestingly are the implications of the phylogenetic hypothesis of this study on the evolution of feeding in the mysticetes, relative to other recent hypotheses. Raptorial feeding is primitive for cetacea as a whole, including basal mysticetes. Interestingly, Llanocetus, Janjucetus, and Mammalodon all form a southern toothed mysticete clade, and Fitzgerald (2010) lumped Janjucetus and Mammalodon into the family Mammalodontidae, scrapping the family Janjucetidae he proposed earlier (2006). Llanocetus exhibits no adaptations for suction feeding, although Janjucetus does, suggesting that suction feeding is derived for this clade, but not a typical feature of basal mysticetes in general. Thus, this suggests that whatever feeding mode the mammalodontids employed was likely not representative of early mysticetes, contra Fitzgerald (2006). 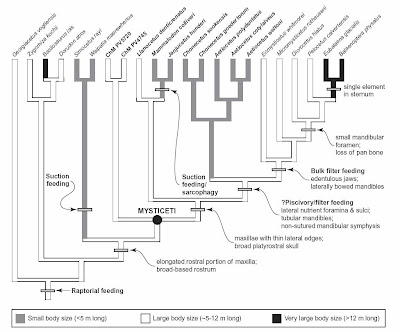 What the hell is Llanocetus, anyway? Llanocetus is perhaps the most interesting and strange described/undescribed cetacean out there. Well, what does that mean? Llanocetus was collected from the late Eocene La Meseta Formation of Antarctica. Yes, the Eocene of Antarctica, my friends. Why is that particularly awesome? The Eocene is dominated by archaeocetes, and elsewhere on earth during the late Eocene fantastic critters like Basilosaurus and Dorudon were kicking ass and taking names. And Llanocetus is the earliest known mysticete, let alone record of the Neoceti. The original description of Llanocetus denticrenatus by Ed Mitchell (1989) includes a maxillary fragment, mandible fragment, and an endocast - overall, marginally crappy. Later on, Ewan Fordyce revisted the site and collected what he initially thought was an archaeocete, and it even included (apparently) vestigial hindlimb elements (plural), similar to the condition in basilosaurid archaeocetes (which are not too phylogenetically divorced from Llanocetus, after all). This turned out not only to be a toothed mysticete, but the remainder of the holotype skeleton. My guess is that whoever originally collected the holotype scraps was freezing their ass off and said "to hell with it" and left. However, even though a cast of the skull is now on display at the USNM, the rest of the holotype is not yet described, and the dotted outline provided by Fitzgerald (2010) is the most informative figure ever published of this rather interesting beast. Anyway, I'll be pretty excited whenever the description gets published (much of the above information was presented by Fitzgerald, 2010, in his discussion of taxa used for the cladistic analysis).

The next post will (hopefully) be less-rambling, and will detail the transition from teeth to baleen in archaic mysticetes.

Fitzgerald, E.M.G. 2006. A bizarre new toothed mysticete (Cetacea) from Australia and the early evolution of baleen whales. Proceedings of the Royal Society B: Biological Sciences
273: 2955–2963.

Fitzgerald, E.M.G. 2010. The morphology and systematics of Mammalodon colliveri (Cetacea:Mysticeti), a toothed mysticete from the Oligocene of Australia. Zoological Journal of the Linnean Society. 110p.
Posted by Robert Boessenecker at 4:35 PM 9 comments: