Two weeks ago today, I delivered a presentation on the first day of the 2011 Aquatic Tetrapods conference in beautiful San Diego, California. I had eight hours on my drive down to San Diego the day before to worry about how screwed I was: the last time I gave that presentation, it was only 20 slides longer, and took 50 minutes to deliver. I practiced it once Monday morning in front of Joe El Adli (our gracious host), and Yale students Rachel Racicot and Daniel Field - I barely fit it into 20 minutes. It all worked out fine, and in the actual presentation, I finished the last conclusion slide right as it counted down to zero. This was a fresh break from SVP tradition, which dicates that cetacean research is presented on the afternoon of the last day, giving you all week to worry about the presentation. This time, I was able to relax during the entire meeting. 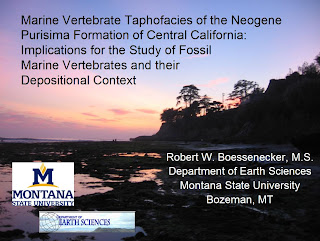 My title slide for my taphonomy presentation.
It would be very difficult to summarize all the research presented, but I might be able to summarize a few of the highlights that stick out in my mind. Julia Fahlke (University of Michigan) gave a fascinating talk Monday Morning about basilosaurid and protocetid cetaceans with asymmetrical crania, and implications for the evolution of hearing underwater. I'll admit, when I read the abstract I was skeptical, but her presentation was pretty compelling - I'll wait to say more until it gets published, though. Brian Beatty presented some details of his research on meningeal ossification in cetacea, which appears to not be homologous to that in many other mammals. Larry Barnes showed us a new Paleoparadoxia skeleton the LACM has been working on from the Monterey Formation; it's virtually complete, with a very large, gnarly looking skull. Olivier Lambert gave a talk coauthored by Giovanni Bianucci on a new large assemblage of bizarre ziphiid fossils dredged from the seafloor off the coast of Spain; boy, there are some real freaks. Our Australian colleague Erich Fitzgerald presented a new juvenile aetiocetid skull from the Oligocene of Washington State which he's been slowly preparing with acid; needless to say, it's a beautiful specimen. Manuel Martinez, a Peruvian who is Christian de Muizon's Ph.D. student, presented on an incredible new toothed mysticete from the Oligocene of Peru - I won't give any details, but lets just say this will be a very, very important specimen. 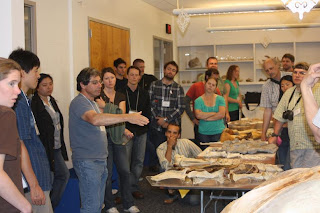 Frank Fish gives a mini presentation on locomotor adaptations of various marine mammals, using an assortment of articulated limbs (a walrus forelimb is seen in the foreground).

On wednesday, we went over to the San Diego Natural History Museum for an osteology workshop on aquatic tetrapods. Due to the research focus of Tom Demere (Paleo curator) and Annalisa Berta, the majority of material out on display was from modern and fossil marine mammals. There was a great assortment of wonderful stuff out, and it was amazing to be there with so many other marine mammal (and otherwise) researchers there. 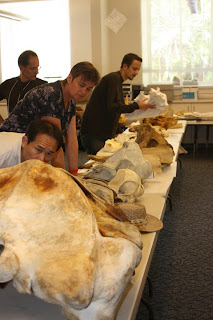 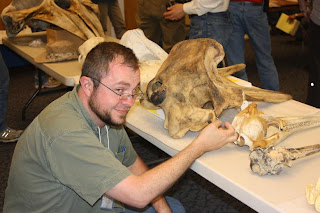 At the workshop, I caught Brian Beatty red-handed demonstrating his very technical method to determine the relative height of the bony tentorium (here on a skull of the Amazon river dolphin, Inia geoffrensis). 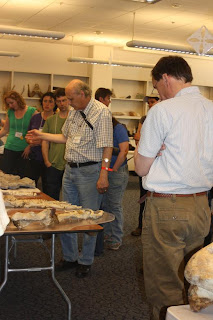 For a while, Daryl Domning gave a short presentation on the locomotion and forelimb of sirenians (using a Manatee forelimb skeleton). 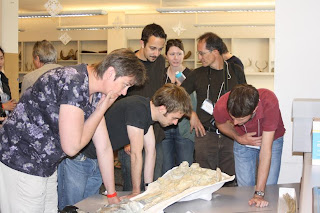 Here, some of the brightest minds in cetacean paleontology scrutinize one of the weirdest fossil mysticetes: a new species of Herpetocetus under study by Joe El Adli. From left to right: Mette Steeman, Joe El Adli (standing), Felix Marx (leaning over skull), Meredith Rivin (background), Giovanni Bianucci (in glasses), and Olivier Lambert (in red). 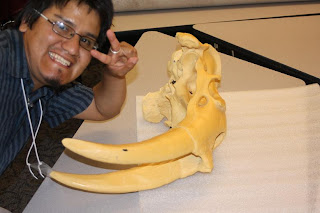 Manuel Martinez, a Peruvian researcher studying with Christian de Muizon in Paris, did not waste a chance to photobomb. Here he is photographed with a cast of the skull of the bizarre extinct edentulous* walrus Valenictus chulavistensis. 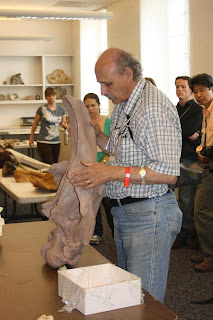 Daryl Domning again gives a short presentation, this time on sirenian crania. Here he is showing a cast of the skull of the world's largest sirenian, the extinct Pliocene species Hydrodamalis cuestae (the ancestor of the "modern" Steller's Sea Cow). 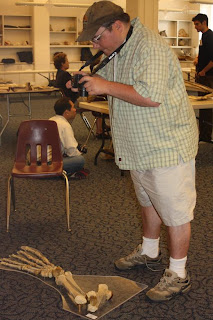 My (soon to be) coauthor Morgan Churchill photographs an articulated hindlimb of the modern walrus. 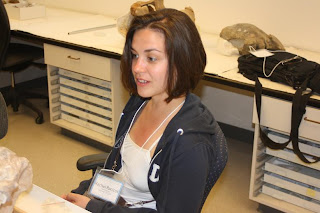 Rachel Racicot (and Daniel Field) hung out with me for a bit in the type room at the San Diego Natural History museum while I photographed some fossil pinniped material. Skulls of gigantic Hydrodamalis cuestae sit on the table behind Rachel.
Posted by Robert Boessenecker at 2:00 PM No comments:

Sorry for the hiatus - graduation, etc.

...I've only been trying to graduate in the meantime. I'll admit, last October it wasn't looking great: I had a month and a half left of the fall semester, and one more semester after that in order to finish up all my courses, take my comprehensive exams, write my thesis, and defend it. I had already been in graduate school for slightly over two years, and now my third year was nearly halfway gone: I had a goal of submitting a draft of my thesis before the end of the semester, and at the time it didn't seem terribly realistic. I must have broken some world records though: I had my 110 page thesis written in three weeks flat (the week before thanksgiving, and then the two weeks afterward before winter break). What's strange is that it wasn't a total piece of crap either: it only required minimal editing by my advisor (and eventually my other committee members).

Apparently MSU prefers students to NOT take comps and do their defense in the same semester: I spent most of the early spring semester editing my thesis and constructing figures, and didn't get around to my comps until April 1; I did my defense only three weeks later. I am in no way trying to brag: it was hell, and if the same fate befalls you, well, you screwed up. Don't let it happen. That being said, however painful it is - it IS possible to do it all in such a short span of time if you stick to it, motivate yourself, and keep distractions (i.e. PC games, hiking, artwork) to a minimum.

My defense was on April 25 if I recall correctly: I didn't have much in the way of terribly difficult questions (I feared for the worst if certain parties arrived), and my committee really didn't have too many edits for me: many of them were time consuming because I had to look up some new articles. I spent most of finals week going over final edits, and formatting. I spent most of the two weeks after finals still working on formatting. We'll see if my thesis ever gets accepted by DGE.

Then around May 20 I drove out to California: I drove out through oregon to visit a couple fossil sites, and didn't find crap; I was home for about a day until I drove up to Lake Tahoe for the weekend, and then I had to leave there a day early to go and meet Dick Hilton up at Point Reyes, CA for fieldwork (some posts on that later). We found some great, exciting stuff...

I was home for two days after Pt. Reyes until I had to drive ALL the way down to San Diego for the Sixth Triennial conference on the Secondary Adaptation of Tetrapods to Life in the Water (SATLW). In fact, while on the beach in Bolinas in Marin County, I got a voicemail from Tom Demere (curator of the San Diego Museum and co-host of the conference) saying that my talk had been moved up to monday afternoon. I was pretty freaked out, because I had not yet shortened my talk from my 50 minute thesis presentation down to 18 minutes for the conference presentation, and I had two days to work on it.

Anyway, more about the conference soon. I think you can tell that I haven't had adequate time since my defense to do any blogging - but have no fear! The metal bars of my thesis and graduate school have (temporarily) disappeared and I can once again do 'fun stuff'.
Posted by Robert Boessenecker at 11:14 AM 1 comment: