About two years ago I came across a partial lower jaw of a small baleen whale in a cliff. The outwardly bowed part of the jaw was facing the outside of the cliff, and the middle had eroded away, leaving the anterior and posterior ends. I immediately collected the posterior end, which was (and currently still is) in a small nodule, and awaits further preparation. However, what is preserved indicates it belongs to Herpetocetus - my favorite cetacean. The posterior mandible of Herpetocetus is very distinctive; the three main features of this part of the jaw (the coronoid process, mandibular condyle, and angular process) are all anteroposteriorly elongate relative to other mysticetes, with the angular process projecting posteriorly as a flat flange. Anyway, as the specimen isn't prepared yet, I'm not going to show you pictures of the interesting part.

After I collected the posterior part, I tried to excavate the anterior portion; I successfully removed two segments which broke along natural cracks, and a third portion (which I figured at the time was the anterior tip) which was stuck in a nodule, and was rather stubborn. I decided to leave that part in the cliff, and return later under more favorable conditions. The next few visits it remained, and I checked up on it; I figured noone else would disturb it (or even spot it). Well, I got lazy, and over thanksgiving, I returned with the intention of collecting it, and some fresh pick marks were around it, and whoever it was had chipped away a little bit of bone, much to my chagrin. Anyway, I excavated the rest of it immediately; fortuitously the other person had started a trench around the concretion, so it took a mere 5 minutes to carve around it and pop it out - and it did make a 'pop' sound and land with a resounding thud on the beach sand, to which I said to myself "if I had known it would have been that friggin easy, I woulda done it two years ago!".

The anterior dentary before and after chiseling.
The problem was, I had no idea whether or not the two pieces would even connect, given the damage done by the other collector, and two years of erosion. And I had to fly with the fossil in my duffel bag all the way back here to Montana to find out. I "gingerly" chipped away some pieces of the concretion with a rock hammer and chisel, which split the rock from the bone perfectly.

The anterior 1/3 of the Herpetocetus mandible.

Then, when I got back to Bozeman, I took the fossil to campus and nervously matched up the two sides - a lot of bone was definitely missing, but (thank god) the two pieces matched up along the ventral side of the bone, preserving the natural length (which is kind of moot anyway, given that I'm missing the middle - kind of, because I measured the missing distance when I was in the field). Some major acid preparation is in order, as well as some serios airscribing and microblasting on all three pieces. These specimens are very similar to mandibles of Piscobalaena, a cetotheriid from the Pliocene of Peru, and the probable sister taxon to Herpetocetus (Bouetel and Muizon, 2006). To be totally honest, the piece of the mandible I've shown you looks pretty damn similar across much of Chaomysticeti (baleen bearing mysticetes), with the possible exception of balaenids.

The mandible of Piscobalaena nana from the Early Pliocene of Peru (from Bouetel and Muizon, 2006)
This is one of five partial Herpetocetus dentaries I've collected from the Purisima Formation (none are currently in museum collections at UCMP or SCMNH), and is the second most complete specimen; one is a complete, ~4' long, very large and robust dentary, and the others are all posterior dentaries (i.e. posterior 1/3). Two of these are extremely small (i.e. one is a fragment where the shaft of the dentary was only 2.5cm high), and likely represent neonates or extremely young individuals. These specimens, along with a nearly complete skull, a partial skull, half a dozen petrosals, and several tympanics will be the subject of a study by Jonathan Geisler and myself. In addition, there are two more possible (one definite) Herpetocetus crania in-situ, which will (hopefully) be excavated over winter break.

Bouetel, V., and C. de Muizon. 2006. The anatomy and relationships of Piscobalaena nana (Cetacea, Mysticeti) a Cetotheriidae s.s. from the early Pliocene of Peru. Geodiversitas 28:319-395.
Posted by Robert Boessenecker at 9:11 PM 4 comments:

About two or three summers ago I collected a beautiful little odontocete tympanic from the Purisima. Problem was, I only found out it was beautiful (past tense) after it sat in about twenty or thirty pieces. Because the part that was exposed looked like some other type of bone (and not an odontocete tympanic) I mis-estimated how sturdy the fossil was, and it exploded as I carved matrix away from it. I have since not repeated the mistake. Anyway, the fossil has sat in pieces in a plastic bag for two years, and I finally got the courage to glue it back together. I say courage because 1) I was somewhat embarassed by this damage, and 2) I was nervous to piece together all these tiny fragments. Below is a photo of what I had to work with. 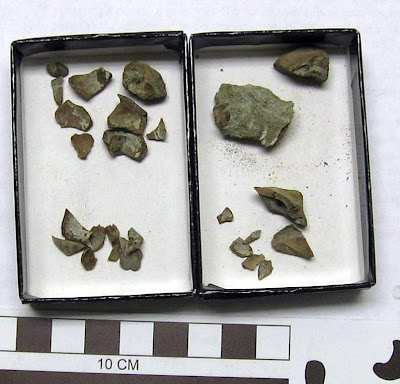 Tympanic fragments prior to preparation.
I began by finding the pieces of the robust involucrum, which is the thick portion of the cetacean tympanic. There are more or less three major portions of the tympanic: the involucrum (frequently the only preserved part), the posterior process, which attaches to the posterior involucrum, and the paper-thin involucrum (which in odontocetes is usually under 1-1.5mm thick, hence the overall fragility of these elements). Then, I started finding matching pieces, and gluing these to the involucrum. 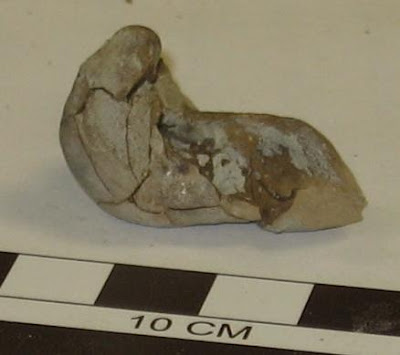 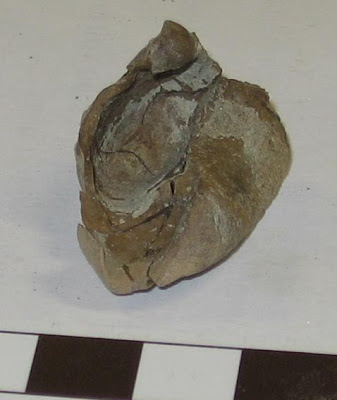 The tympanic after 30 minutes of preparation; some of the outer lip fragments have been glued in place. Lateral view (top photo) and anterior view (bottom photo) - note the matrix-free tympanic cavity.
After a couple more hours, I was able to finish gluing back most of the outer lip of the tympanic, as well as the posterior process.

Tympanic before (left) and after (right) addition of the sigmoid and posterior process.

Tympanic in dorsal (left) and lateral (right) aspects.
After the fossil was glued together, it became very obvious that this was a tympanic from the "river dolphin" Parapontoporia wilsoni, which has a small posterior process, a sharp anterior apex of the bulla, and most characteristically a laterally inflated outer lip, not seen in any other Purisima odontocete (for which tympanics are known, and out of the given tympanic sample from the Purisima Fm.). As far as crania, jaws, periotics, tympanics, and parts thereof go, Parapontoporia is by far the most common Purisima odontocete (i.e. between collections at UCMP, SCMNH, and LACM go, there are roughly a dozen nearly complete crania known, rostrum not included). 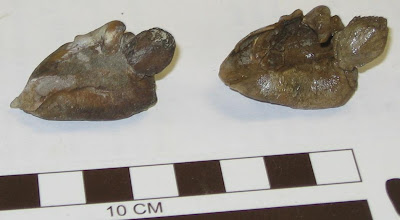 Newly prepared tympanic (right) side by side with another very well preserved Parapontoporia wilsoni tympanic.

All in all, I was extremely pleased; in one afternoon I had turned a pile of fragments (which I had virtually no hope for) into a beautiful little specimen. All but three tiny fragments under 5mm in size were glued on; the other ones probably attached to the margin of the outer lip, which may require fragments lost during collection (or, conversely, pieces pulverized). But let's not split hairs here - this by far was the most damage I've ever done to an odontocete tympanic, to the point where I was embarassed to even think about it; and now, it's one of the nicest I have. The positive side to this inadvertently destructive mode of
collection was that all the matrix was absent from the tympanic cavity, unlike the specimen on the left in the above photo (where the matrix inside was actually phosphatized, but phosphatic 'cementation' had fortuitously not formed an overgrowth around the rest of the bulla - best case scenario!). This is one of about a dozen and a half or so odontocete bullae I've recovered from the Purisima.
Posted by Robert Boessenecker at 10:04 PM No comments:

Petition to save the UBC track site in New Jersey

An early Jurassic dinosaur track site in New Jersey is currently in danger of being destroyed by development for a new set of high-end condos. The track site is directly adjacent to a park, and if the park boundary is extended only 200 feet, the locality can be preserved for posterity (and I believe *most* or *some* of the condo development can continue as well, so that would be more or less a win-win for both sides).

While many folks don't believe in online petitions, the "Help Save Capitola!" petition catalyzed opposition in 2003 and 2004 to help defeat the seawall that would have been built along the Capitola cliffs; that locality was saved, due in part to the petition I drafted during my freshmen year of college.

Anyway, the petition can be viewed here and signed here. I highly suggest anyone worth their salt as a paleontologist or fossil enthusiast to sign the petition; it broke 1000 signatures friday morning, and as of now, has 1804 signatures.
Posted by Robert Boessenecker at 5:31 PM 1 comment: