The next day I returned to the locality, and with the help of my buddy Chris Pirrone, we finished undercutting the pedestal; due to the extreme cohesiveness of the sediment, we were able to undercut the pedestal by 3 inches on all sides - which is generally a rare opportunity; with many other fossiliferous units I've worked in, the side of the pedestal would collapse or calve off into the trench.

Within two hours of arriving, we were ready to begin the jacketing process. Above, you can see the top jacket. 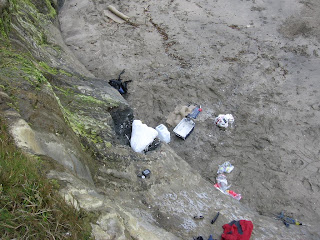 Here's a view from the top of the cliff of the plaster jacket and the hole. You can definitely see that with the size of the hole, I was prepared for something sticking further into the cliff.

Chris Pirrone, with the jacket.

And finally, myself with said jacket. I have more pictures of the completed jacket, but they would give away the location, which I'm not terribly keen on doing. All in all, this excavation totaled about 8 hours. By comparison, the well preserved Herpetocetus bramblei skull I collected nearby in 2007 took about 12 hours of excavation, and four hours of jacket transport. Thanks to the much more convenient location of this fossil, jacket removal and transport took a total of two and a half minutes; the tide was way out, so we were able to walk (comfortably) with the jacket to a conveniently placed set of stairs, and then up. The battle Chris and I waged in July 2007 to get the other Herpetocetus skull off the beach is quite a story, and one that I don't think I've detailed here previously.

Anyway, as I probably already mentioned, this specimen includes the first complete rostrum of
a Herpetocetus ever collected, and will feature prominently in my future studies of this enigmatic fossil mysticete.
Posted by Robert Boessenecker at 12:30 PM 3 comments:

Unfortunately, when I discovered this fossil in its mutilated state, it was two days before I planned on driving back to MSU at the end of the summer, and my last scheduled day of fieldwork for summer 2009, so it was absolutely out of the question to excavate the fossil then. So, I had to return sometime to excavate it. I didn't have the option of doing so over Thanksgiving, Winter, or Spring Break, so I waited a whole year. As it turned out, not much erosion had occurred locally over since initial discovery; just to make sure, I'd visit the fossil every couple of weeks.

I finally had the time to excavate it in mid August; I had some ambitious plans for my last week of summer in California: Saturday and Sunday up at Lake Tahoe, monday and tuesday excavating the fossil, wednesday at the Santa Cruz Museum of Natural History, Thursday at California Academy of Sciences, Friday at University of California Museum of Paleontology, packing up my car on Saturday, and Sunday thru Tuesday on the road.

I found out a couple days before hand I would be able to enable to enlist the help of my longtime friend and avocational paleontologist, Chris Pirrone, a local attorney in the San Jose area. Chris helped me excavate the first Herpetocetus skull (which, if you attended my SVP talk in 2008, was the focal point of that research), and has helped me with a few other excavations in the Santa Cruz area.On Monday I was all by myself removing overburden. Surprisingly, after only about four hours of chopping at the cliff face with a railroad pick, all the overburden was gone. So, I started to carefully remove rock an inch at a time by tapping my clam knife with a rock hammer. Eventually, I found the premaxillae, and was able to determine the angle the rostrum went into the cliff (and, more importantly, the fact that the rostrum did in fact exist). If the rostrum paralleled the cliff face, then it would make for an easier excavation, as I would not need to dig as large a hole. Unfortunately, the rostrum dove in there pretty steeply.

Here's what it looked like after the first day of the excavation: admittedly there's not much there - and that's exactly the way I prefer it for an excavation. The more fossil bone you expose during the excavation, the higher the chances of damaging that bone. So it's important to figure out during an excavation what the fossil is, which way it's oriented, and roughly where each feature should be; surprises during excavations are usually made by damaging bone.

I've outlined in red the anterior portion of the rostrum (premaxillae are the skinny medial elements, while the maxillae are the wide lateral elements). I exposed some bits of the premaxillae here and there, but just enough to know 1) the angle of the skull going into the cliff and 2) the tip of the rostrum. Oddly enough, the midline of the rostrum didn't match up with the midline of the skull exposed in the cliff. As it turns out, there was a fracture running obliquely through the rostrum - you can see it, near where the red lines end. It's actually offset by about five or six inches.

To be continued...
Posted by Robert Boessenecker at 12:15 PM No comments: