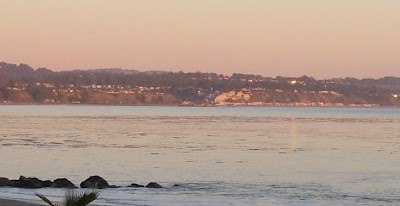 I've finally gotten around to posting some field photographs from winter break. I didn't get out as much as I did last winter, but that didn't stop me finding a nice (and complete, mind you) odontocete skull, a partial Herpetocetus jaw, and several fur seal (Thalassoleon cf. T. macnallyae) bones, as well as a monstrous walrus astragalus.

First are some photos which constitute a quiz, selected from winter break photos. 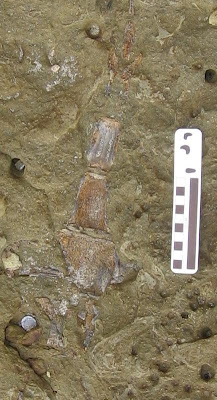 1). Here's an articulated baleen whale vertebral column. Which way is the head? (No guessing [e.g. that means you, Sarah]. I realize its a 50/50 chance if you guess. State a reason for your answer) 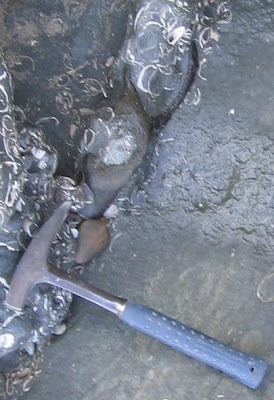 2). A fossil I didn't collect (but may jacket this summer if I get really bored, and if it is still there). What is this thing? 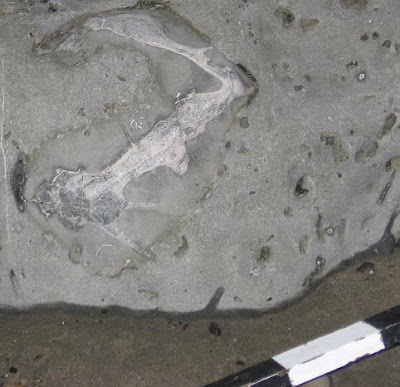 3). What the hell is this? This specimen can be identified to the genus, FYI. Morgan and Rachel can only answer this if they get the genus correct = P

OK, now for other photos. Enjoy! 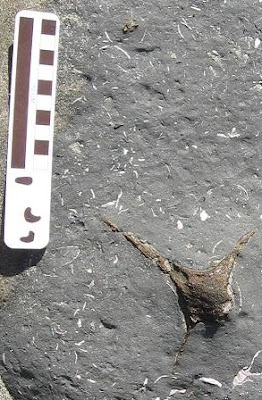 A small odontocete vertebra in a shellbed. This guy did not want to be collected.

A huge mysticete vertebra (to right of hammer) exposed in the bottom of a shelly channel-like structure. 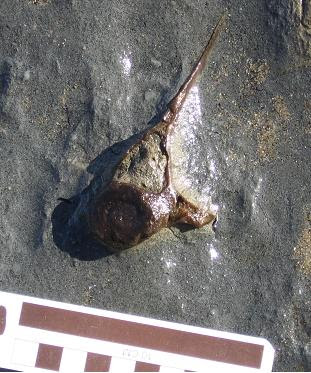 Another small odontocete vertebra. I did collect this specimen, and after preparation, it had a bunch of clayey fecal pellets (of probable crustacean origin) adhering to it. 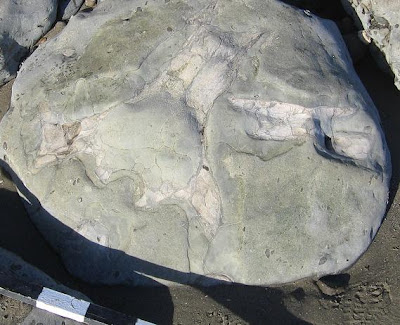 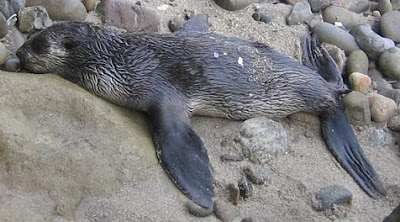 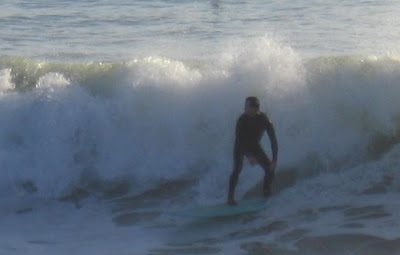 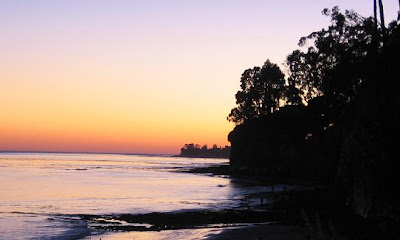 Sunset at Capitola! It was hard to leave, as the tide was just going out.
Posted by Robert Boessenecker at 3:50 PM 5 comments:

Here's another skeletal reconstruction I've done. This time, it's of the large Middle-Late Miocene pinniped Allodesmus.

Allodesmus kernensis was approximately 10' long, and about in the size range of extant Steller's Sea Lions (Eumetopias jubatus). It is placed in the extinct family Desmatophocidae, which it shares with the much smaller Desmatophoca, two species of which are known from the early and middle Miocene of Oregon and Washington.
Posted by Robert Boessenecker at 9:02 PM 2 comments:

Finally - answer to the quiz

Well, its been almost a month, and I apologize (I've been busy working on a manuscript).

Anyway, J. Velez-Juarbe got it right - the mystery fossil is a centrum fragment of a very large elasmobranch. In this case, it belongs to the basking shark Cetorhinus maximus, which is a fairly common member of the fish assemblage in the Purisima Formation.

A gill raker of Cetorhinus maximus from the same locality.

The fossil itself is from a 5.8 Ma portion of the Purisima Formation, the type locality for the cetaceans Herpetocetus bramblei and Parapontoporia wilsoni. When I collected it I noticed it was composed of fairly dense bone, so before seeing some of the more subtle features, I thought it was a large bone from a teleost such as an operculum or cleithrum. 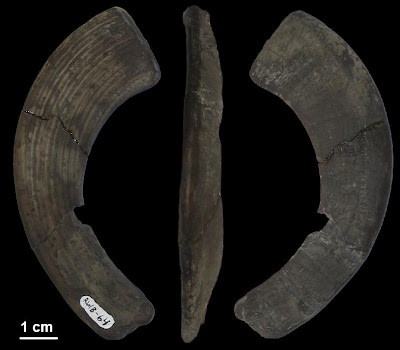 The specimen in question.

However, you'll notice a few distinct features: one one side are some circular concentric ridges, which are the "growth lines" on the surface of elasmobranch and teleost vertebrae. Flip it over, and there are radial ridges. And on top of that, it has a very subtle curvature to it suggestive of a partial cone. I have some similar specimens of much smaller sharks (probably Carcharodon).

As you can see from the above photograph, the vertebrae of sharks have radially oriented laminae that buttress the two conical parts of the centrum (I'm not totally honed up on elasmobranch vertebral anatomy).

Why is it Cetorhinus, however? Certainly there are other large sharks today and the Miocene as well. Naturally a good question. Other modern sharks today that approach these sizes are Rhincodon typus (whale shark), and Megachasma pelagios (Megamouth Shark). These sharks are, however, much rarer in the fossil record. For example, Megachasma is only known from a few localities in the United States (Pyramid Hill, Early Miocene, CA; Skooner Gulch, Early Miocene, CA; Lee Creek, Early Pliocene, NC - see www.ELASMO.com-->Genera--> Neogene-->Megachasma for more information). Rhincodon is possibly even rarer. Cetorhinus, Rhincodon, and Megachasma are all gigantic filter feeding sharks, a remarkable case of convergence within elasmbobranchs. Whale sharks are obviously the largest (up to 15 m if I remember correctly), and Megamouth sharks are the freaks who weren't discovered until the late 1970's, and give idiots like Steve Alten the argument that C. megalodon might still be hiding in the depths (and thus miraculously adapted to abyssal and bathyal water depths and temperatures and was no longer adapted to feed on marine mammals). For more of this bullshit on C. megalodon still existing (and C. megalodon having its guts liquified by echolocating Brygmophyseter shigensis [its an acoustic battering ram!!]), I highly suggest consulting Jurassic Fight Club.

In addition to Rhincodon and Megachasma, there is also the baddest shark ever, Carcharocles megalodon. C. megalodon certainly had vertebrae this large, and is known from the latest Miocene and early Pliocene localities all over. However, there are no credible occurrences of Carcharocles from the Pliocene of the eastern Pacific, and the youngest occurrence of Carcharocles in the Purisima Formation is in the basal unconformity (and is likely reworked from the 7-9 Ma Santa Cruz Mudstone). There are also only two teeth of C. megalodon ever collected from the Purisima Formation; the smaller of the two resides in a private collection, and I collected the larger one the day before Christmas Eve 2007 (and is happily sitting on my desk as I type this). In any event, it appears that C. megalodon was already extinct in the eastern Pacific by the time this vertebra was deposited. This is strange, as C. megalodon occurs abundantly in the Yorktown Formation on the east coast, which is Early Pliocene in age. Carcharocles may have held out in the Atlantic longer than it did in the Pacific.

On top of this, the vertebrae of C. megalodon are much antero-posteriorly thinner than those of Cetorhinus, which has vertebrae that are nearly as long as they are wide (1:1 contrasting with an approximately 1:4 length to width ratio in Carcharocles, Carcharodon, Isurus, and other Otodontidae/Lamnidae). This is directly reflected in the 'height' or 'depth' of the cone, which in Carcharodon and Carcharocles (Gottfried et al. 1996) is rather flat, and steeper shall we say in Cetorhinus (Gottfried, 1995).