First of all, it's been over a month since I've posted anything, and I feel that apologies are in order. I have been devilishly busy with dissertation writing, and feel like I am finally at about the halfway point. Things have relaxed somewhat, and I've got a few ideas for quicker posts and some longer ones. Relatively soon I'll be tackling an issue I've always wanted to talk about but have never had the time to read all the relevant papers in depth - controversies surrounding the highly derived, extinct pinniped Allodesmus from the Miocene of California, Mexico, Washington, and Japan.

Before I do any of that, it's been about six months since I posted the review of publishing trends for marine vertebrates from the eastern North Pacific. In the meantime, eleven (11!) new articles have been published (that I know of). The newest addition to the list is a new kentriodontid dolphin from the middle Miocene Rosarito Beach Formation - I had updated the list over the weekend, but thanks to this new paper (in Spanish with English abstract - pdf freely available online here) I had to update it again this evening. 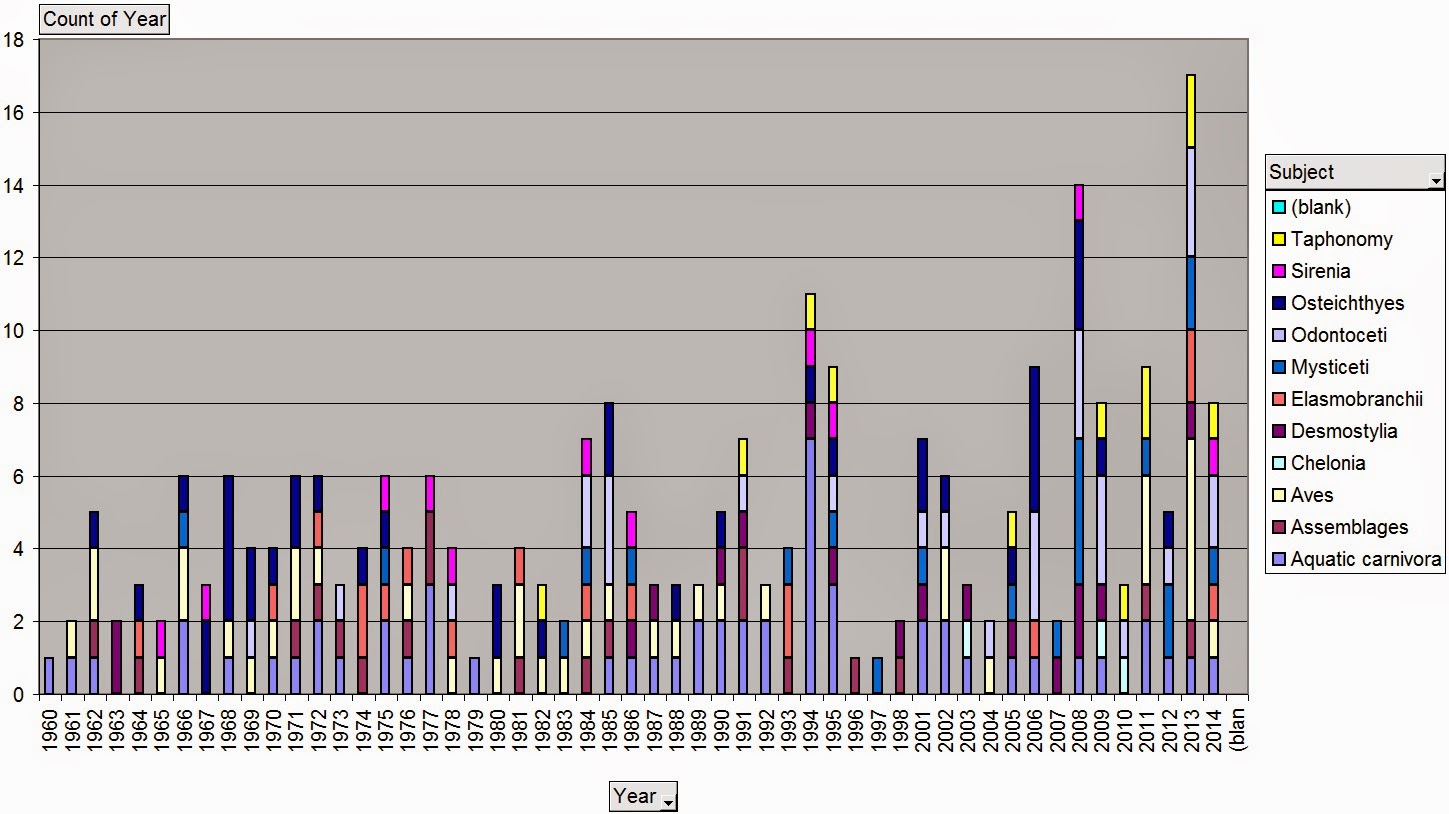 There are two things you should notice. 1) 2013 has the largest number of publications on record dealing with marine vertebrates from our corner of the globe. There are five papers on fossil birds, mostly by colleague N. Adam Smith at NESCENT. 2) We're only four months into 2014, and at this rate we're already looking to beat the record of 2013 (although it is very possible that things may slow down). Regardless, 8 publications is fairly high for any year - only a handful reach 8 or higher.

Unlike the last time I posted this in October, I've now placed my excel file up on the web - so, you are free to download it, and if you so desire, notify me of glaring errors or omissions. Click here to download the excel file. At the moment, it's set up very simply: just four columns, with the aforementioned subjects (Taphonomy, Sirenia, Osteichthyes, Odontoceti, Mysticeti, Elasmobranchii, Desmostylia, Chelonia, Aves, Assemblages, and Aquatic Carnivora).

A publication need not be alphataxonomic in scope to merit inclusion - those certainly count, but minimum requirements for inclusion in this list include any of the following: 1) extensive discussion of the morphology, functional anatomy, age, or biogeography of marine vertebrates from Cenozoic rocks in the eastern North Pacific (e.g. Smith and Clarke, 2013, who used bones of the flightless auk Mancalla for histologic study); 2) published figures of said marine vertebrates, even if focusing on fossils from elsewhere (e.g. Velez-Juarbe and Pyenson 2012, in their paper on Bohaskaia - an Atlantic odontocete - figure the holotype skull of Denebola brachycephala); 3) extensive sampling of ENP marine vertebrates for any sort of quantitative study (e.g., Ando and Fordyce 2014, who used data on fossil occurrences from many ENP vertebrates for a large part of their analysis). If you are confused by a particular inclusion or omission, at least you can make some sense out of my strategy.

Future efforts: it would be nice to include a proper citation for each publication, but boy there are a lot of them, and it would take me a lot of time that I don't have. If there is a paper you see but were unaware of, shoot me an email - I've either got a pdf of it, or a paper copy in a box back in California (in which case you should use interlibrary loan, since it's going to be another 12 months until I'm home again).

Other future tweaks I might investigate and post in the future: the ratio of marine mammal to non-mammal publications, and the ratio of regular articles to book chapters/edited volumes. I believe that 90% of the big 1994-1995 spike is because of the 1994 Frank Whitmore marine mammal paleontology volume and the 1995 Island Arc volume (also heavily marine mammal-themed).
Posted by Robert Boessenecker at 5:39 AM No comments: