Here are some pictures of the balaenopterid skull after preparation was completed. I finished preparation the tuesday before spring break. On wednesday and thursday I made the cradles, and friday loaded it into my car to drive back to California (on saturday). 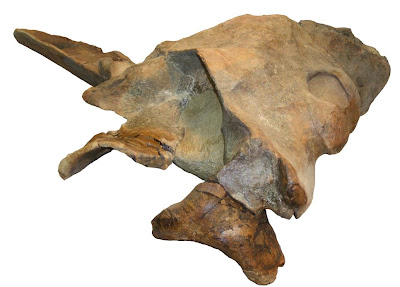 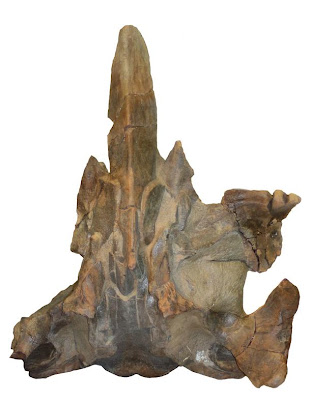 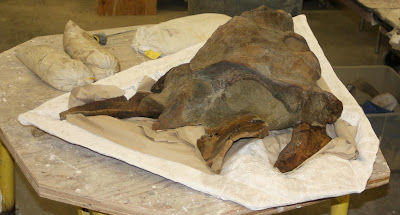 The skull with the completed ventral cradle.

The skull with both ventral and dorsal cradles.

On Friday of Spring Break, I met UCMP Curator Mark Goodwin at the oversize storage facility to drop the specimen off. UCMP is getting a new storage facility which will be a vast improvement over the current warehouse at the Clark Kerr campus (conveniently located right on the Hayward Fault).
Posted by Robert Boessenecker at 11:15 PM 6 comments:

As I mentioned in a previous post, I've been preparing a fossil mysticete skull I collected from the Purisima Formation in 2005 for a long time (i.e. 4.5 years). This winter and spring I really stepped up preparation, and you can see in these photos what the specimen looked like in January. At this point, Tom Demere of the San Diego Natural History Museum, who specializes in fossil mysticetes, tentatively identified this specimen as belonging to "Balaenoptera" cortesii var. portisi, a medium sized balaenopterid from the Pliocene of Italy, Florida, and California (Demere et al. 2005). An undescribed cranium (UCMP) from the San Diego Formation and several crania I've seen in the Purisima Formation have this same morphology, but I did not realize this taxon was B. cortesii var. portisi, or that this specimen belonged in that taxon. "Balaenoptera" cortesii var. portisi is characterized by elongate, widely diverging zygomatic processes, which these other fossils have; it appears that the zygomatics of this specimen are damaged. It is also a taxon that needs a new genus, as it definitely has features that place it outside of Balaenoptera. Tom Demere and Michelangelo Bisconti are currently revising this taxon (Demere et al., 2005). 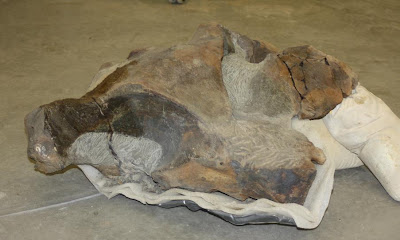 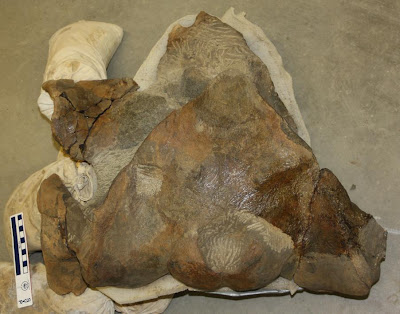 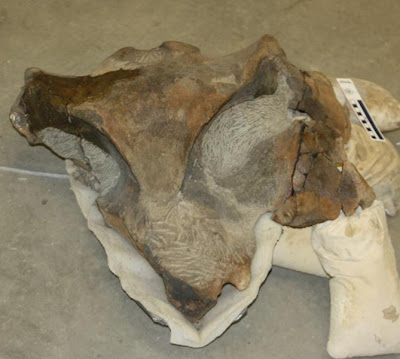 Anyway, quite a bit of matrix was left at this point. Soon, I'll post pictures of the specimen after preparation is completed.
Deméré, T.A., A. Berta, and M.R. McGowen. 2005.
The taxonomic and evolutionary history of fossil and modern balaenopteroid mysticetes. Journal of Mammalian Evolution 12:99-143.
Posted by Robert Boessenecker at 7:01 PM 3 comments: