I'll have some more on taphonomy in the next few days, but before I get to that, I've got some new artwork to post instead. As I've previously alluded to, this has been an absolute heinous semester, even though I've only taken 1 credit in courses. I've spent the entire semester working on several manuscript projects (at least one of which is about to come to fruition; more on that in the coming weeks). Just over this weekend alone, I've received page proofs for my first paper, received final acceptance for another paper, and submitted the revisions for a third paper. Life is good.

From left to right: Agujaceratops, Pentaceratops, Anchiceratops, Arrhinoceratops, and adult Triceratops (="Torosaurus").
In addition to all these, I've been busy with several art projects. The longest project (and still incomplete) is a series of cranial drawings of chasmosaurine dinosaurs for Denver Fowler, for his research he presented earlier this month at SVP for his Romer prize presentation. 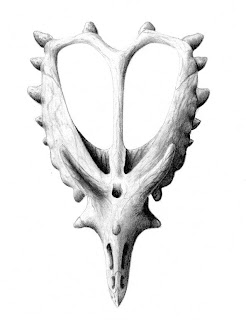 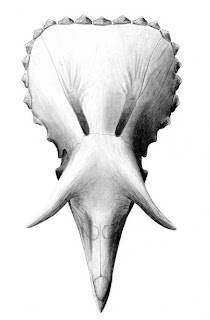 John Scannella, another Ph.D. student here at MSU/MOR, has recently earned some time in the limelight for killing "Torosaurus" (now known to be just the adult form of Triceratops) - although many people over the summer misinterpreted his study as somehow killing Triceratops instead. John asked me back in September to redraw one of Hatcher's beautiful plates of Triceratops for his Romer presentation. Unfortunately, the skull that Hatcher figured lacked a nasal horn, and he needed it to have one... so I drew it with one, and I can only hope that my drawing doesn't make Hatcher roll over in his grave. 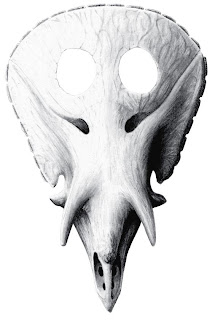 Here's the paleontological 800-lb gorilla in the room: formerly Torosaurus, but what has convincingly shown by Scannella and Horner (2010) to simply the adult form of Triceratops, although many unfortunately still cling to the olde wayes of palaeontological research. This was actually for Denver Fowler's talk rather than John's, and is based on a rather complete "Torosaurus" skull here at Museum of the Rockies.

This I just did for fun over the summer - I actually did this up at Lake Tahoe (and only took about 3 hours, even though it's about two feet wide) while I was on vacation there over the summer. This I believe is some kind of Diplodocus. Some dinosaurs are pretty, although in many cases I could care less which one it actually is. Drawing sauropod dinosaurs is OK, because they're almost as big and almost as cool as a baleen whale. Sorry dinosaur fans, they just never quite made it, but they get an A for effort. 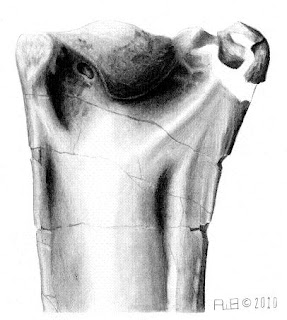 Lastly, this is one of my most recent drawings - this is part of a big bird bone. But that's all I'll say for now; I only put this up here because its a good example of a specimen drawing I've done. This one only took about 4 hours.

Anyway, time for shameless self promotion: I auctioned a bunch of prints off at the SVP benefit auction earlier this month, and made a total of ~350$ for the auction, which, according to Denver F., is something like 1.7% of the entire proceeds from the auction. That feels pretty damn good on multiple levels- for one, just knowing that I helped raise that much money (and it only cost me about six bucks to print all that stuff out, including the plastic sleeves) and two, that it was because people liked my artwork and were willing to bid anywhere from 30-80 bucks for prints. Unframed, unmatted prints in a plastic bag.

Anyway, due to the overwhelmingly positive reaction I got for my artwork at the auction, I recently started an account on ETSY.com so that I can try and sell some prints of this stuff, and be able to afford food, and gas, and things that are usually denied to graduate students. I'm just kidding about that, but being able to make a few bucks off doing what I love would be pretty fulfilling. Anyway, if you're interested, go ahead and take a look at my Etsy account.
Posted by Robert Boessenecker at 2:51 PM 3 comments:

Hey Folks, I know it's been a while (I feel like I say this a lot...), but I've been really, really busy. The semester has been really busy - I've been working on four different papers since I got back to school - but postings will be much more frequent for the remainder of fall. The entire month of September was spent writing a new manuscript, and getting revisions done for a manuscript that is most likely accepted for publication in the Journal of Vertebrate Paleontology. The last week of September and first week of October were spent coding characters for a poster I had with my good buddy Morgan Churchill and his advisor Mark Clementz (on pinniped phylogeny), my own poster, and two art projects I was involved with for two of the Romer Prize Presentations at SVP (by MOR/MSU students Denver Fowler and John Scannella, who between the two of them requested 9 or 10 drawings of ceratopsid skulls). 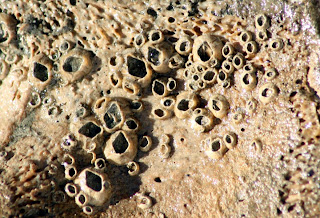 Barnacles!!! (not that you've actually read about them yet). Isn't that cool?!

Six days before SVP started, I finally got the chance to work on my own poster, titled "Barnacle colonization of Middle Pleistocene Sea Lion (Carnivora:Pinnipedia) bones elucidate the biostratinomy of a fossil marine mammal". And no.... this is still not part of my thesis, although it is very similar to what I am doing. And actually, getting the poster done and now recapping on it have really helped me get reinvigorated about my thesis; I consider any time spent thinking about taphonomy is more or less time spent toward my thesis. Because this week I am starting to devote 100% of my research time to my thesis, more of my future posts this fall will be taphonomy related (and specifically marine vertebrate taphonomy, one of the most understudied and underpublished aspects of taphonomy).
But enough about my thesis. It's time for barnacle-on-bone action. 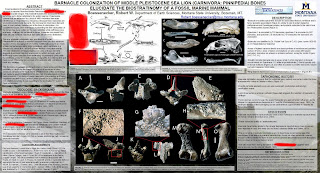 My poster from SVP (locality information is blocked out).

I had my poster presentation on Monday, day two of SVP, which was comforting because marine mammal talks and posters are usually the very last day of SVP, and during the afternoon at that (late afternoon/evening if you give a poster!). Anyway, a couple of years ago (June 2008) I was prospecting a marine Pleistocene locality in Oregon and found a couple of bones in concretions - no big whoop. Because of that, I didn't do anything with the bones for about two months, until I set 'em down in my parent's driveway and sprayed them down with a garden hose. As the soft outer rind of sediment began to wash away, I saw little white things I quickly identified as minuscule barnacles. Due to the library of papers on marine vertebrate taphonomy I've amassed for my thesis, I did a quick mental search, and quickly realized that these had never been reported as encrusting bone before. This made me really excited. 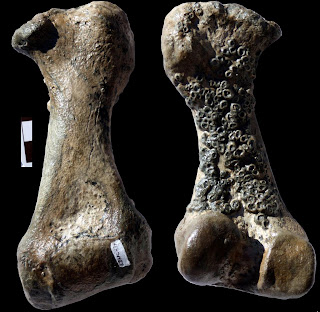 A beautiful sea lion femur with barnacles only encrusting one side.
A less cursory glance at the literature shows that these associations have indeed been recorded before in the literature, but never figured. Two examples have been figured, but either the photos are so god-awful or the item in question probably isn't even a barnacle. Otherwise, it's been mentioned as a sentence (or a part of one) before here and there. There are plenty of examples of modern barnacles encrusting old bones: I see that almost on a daily basis in the intertidal zone in Santa Cruz. To clarify, these are fossil barnacles.

The specimen where I first saw the barnacles.

So, into the nitty gritty. There are 1400+ barnacles distributed over three ones (the femur had ~200, and one of the two vertebrae is hogging 700+ to itself). They appear to be of two size classes: big ones (4-7mm with a few outliers) and small ones (~1-2mm). The big ones do not occur on any articular surfaces or in the neural canal, and predominantly only on the neural arch (i.e. few on the centra). The small ones occur pretty much everywhere, and in many cases are growing on the bigger ones. This indicates at least two colonization events. Dr. R. Van Syoc at California Academy of Sciences was gracious enough to identify the barnacles for me over the summer; they appear to be cf. Hesperibalanus hesperius. It is a species that is still extant, and is a prolific fouler of shells. 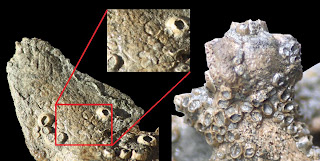 Closeup of the neural arch (left) and transverse process of the vertebrae (right).

Another interesting tidbit is the presence of barnacle attachment scars: here they are on the bone as oval-polygonal shaped traces, that are only excavated along the periphery. This has been reported before for rocks and invertebrate shells, but not bone.

So, what else can we infer? Because we know the ontogeny of modern Hesperibalanus hesperius, we can reasonably infer a gross estimation of minimum time averaging (i.e exposure time on the seafloor), given the barnacle size (basal plate diameter). The modern species only has a lifespan of 7 months, and seeing as none of these are full grown, they probably only represent 2-4 months. This is, however, assuming that barnacle basal plate diameter is constant: it is well documented that crowded barnacles only achieve a certain diameter until their basal plates are all touching and cramped (such as many on these specimens). So, it is possible that some of these were full grown, and so a time of ~ 2-7 months or so, ballpark.

The lack of any barnacles on some surfaces suggest that the surface was uninhabitable due to being smothered in sediment, or by the adherance of tissue. The femur lacks barnacles on the distal condyles, strongly suggesting the retention of articular cartilage there. Also, the femur only has barnacles on its posterior side, suggesting that the anterior side lay in the substrate and was never flipped. On the contrary, the vertebrae have barnacles more evenly distributed, so that it would be difficult not to smother barnacles at any position the bone was situated at. This suggests that the fossil was rolled around on the seafloor frequently enough to keep individual barnacles from smothering, very similar to the balanulith concept recently published in Palaios and Palaeontology. Anyway, there's much more to type about, but you'll have to wait for the paper, lest I retype everything on here.

On another note, I just got a paper on taphonomy (unrelated to this, but slightly related to my thesis) accepted in publication for Palaios, so you may be able to hear about that sometime early next year, perhaps.
Posted by Robert Boessenecker at 10:22 PM 7 comments: