Hey folks,
Sorry for being absent over the last month or so; I've spent an inordinate amount of time up at Lake Tahoe with my family (i.e. ~5 trips totaling over 1 month) and the rest of the time I spent collecting thesis data and fossils in Santa Cruz, and working on manuscripts. With regards to the latter, I received preliminary acceptance of two different manuscripts in the space of one week; you'll hear more about these papers later. In mid-July, I wrapped up a manuscript I've been working on for 5 years; I decided I was finished with it, and submitted the damn thing. Within the same day, I re-submitted a manuscript for Palaios that was returned for major revisions. And about a week later, I received preliminary acceptance of a paper for JVP on Plio-Pleistocene fur seals (which had only been in review for a month and a half, and another month for the editorial decision, which must be some sort of world record for JVP).

One of my many projects this summer was to collect and excavate a small mysticete skull I had discovered on my last day of fieldwork last summer (2009). Here's what I saw in the field: 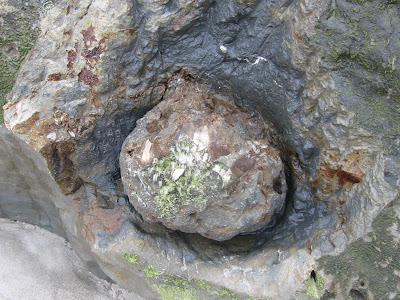 Difficult to make out what it is? Well, I had seen this before, but it was covered up with algae, and I just thought it was a concretion. I want you to look at this picture again, and look for all the broken, mutilated bone in the "trench". Done? Now, I've labeled relevant anatomical structures on the same photo, below. 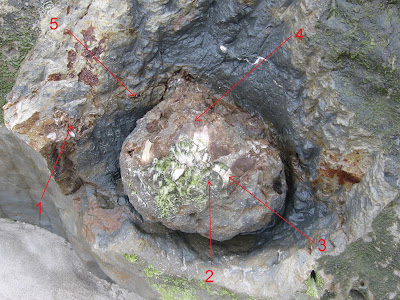 1= Left zygomatic process of squamosal; 2= foramen magnum; 3= right occipital condyle; 4= supraoccipital shield; 5= left supraorbital process of frontal. Yes, that was a complete mysticete skull, keyword: was. I cannot begin to explain how pissed off I was when I saw this. Even worse, then I realized that I recognized that morphology from somewhere: 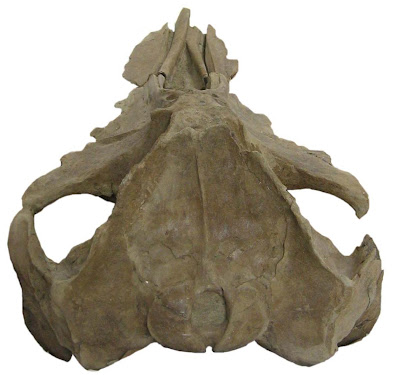 Yes, it was a complete skull of Herpetocetus bramblei. Here's my beautiful specimen from nearby (which was actually collected properly).

So, I don't know who committed this crime, and I don't want to know who it was. I know who it wasn't - I know a half dozen very experienced, extremely competent amateur collectors in the Santa Cruz area who would have never done something this awful to a fossil. I'm not going to use this as an opportunity to scold, though it would be completely warranted. Instead, if you're reading this - let this serve as a plea:

Please don't do this. There are people who can help. I would love to teach you correct excavation methods. This fossil is now mutilated, and the braincase is completely destroyed, and those features and anatomical data are now lost forever. You can still get help. Please, if you find something like this in the future, just ask someone - I'm perfectly happy to help collect it without destroying the fossil or parts thereof.

Additionally, other collectors who do not know me, or if you don't even do collecting in California, it doesn't matter where you are or the color of your fossil: please avoid this at all costs. There are plenty of people willing to help you. Just please, please back away from the edge. I mean fossil.
Posted by Robert Boessenecker at 10:53 AM 2 comments: