On the friday of my last week of summer, I picked my girlfriend up from the SFO airport and we booked it to Golden Gate Park, where the prestigious California Academy of Sciences resides. Over the last five years their collections have been at their temporary facility near the Metreon. I visited several years ago (2007?) to look at northern fur seal skeletons. For my SVP presentation, I needed to compare my partial fossil Globicephala cranium with modern Globicephala, just to make sure my ID was correct. After I finished making my comparisons (and confirming my ID), I started photographing other marine mammal parts, and came across a box marked "Enhydra lutris nereis, with shark tooth!" E. L. nereis is the southern sea otter, which used to live from British Columbia south to Mexico; they were declared extinct, and have since repopulated, but only along Central California, and very slowly. 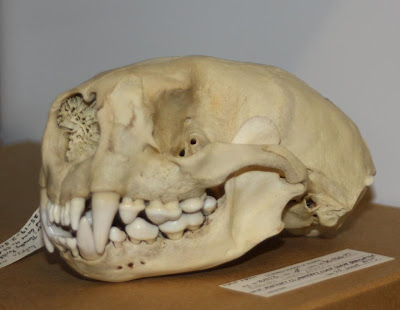 I pulled this skull out, and sure as s*** there was a tiny piece of a Carcharodon carcharias tooth embedded in the skull near the temporal/occipital contact or lambdoidal crest. 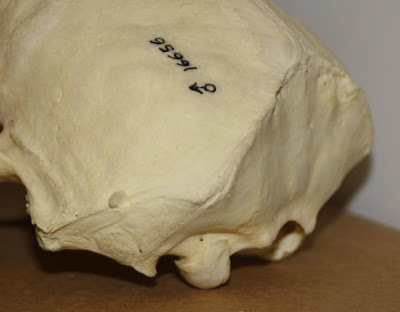 This skull was actually described and figured by Ames and Morejohn (1980), who described multiple cases of sea otter carcasses bearing tell tale bite marks in soft tissue, as well as two different bite morphologies: linear gouges, and parallel scrapes, originating from the serrations being dragged across the bone surface. They also figured about a dozen tooth fragments that had broken off and were embedded in soft tissue, and in some cases, skeletal tissue like this specimen. 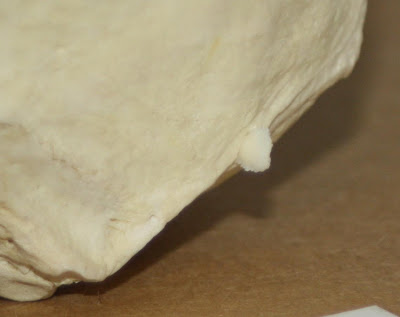 Here's a closeup picture, and you can clearly see the serrations that diagnose Carcharodon carcharias.

Posted by Robert Boessenecker at 10:44 AM

Wow! I've seen a lot of Enhydra skulls in the last year or two, but never anything like that. What is weird is that it almost looks like the tooth is pointing outward, from inside the skull. Am I just seeing this wrong?

Hey Brian, It looks like that because the broken edge is rounded, giving the entire chip a diamond shape (one half is from the actual tip, which is embedded in the skull). So I see what you're saying.

Interestingly, shark teeth in the fossil record (particularly lamnid sharks such as Carcharodon and Isurus) where the very tip of the tooth will be missing as a fresh fragment; Ames and Morejohn (1980) found around a dozen of these missing flakes embedded in the flesh of these sea otter carcasses.

That's very cool, Bobby. The way the tooth broke is interesting. I've got a juvenile C. megalodon tooth that apparently broke that way when it bit into a cervical vertebra of Eobalaenoptera. We found the entire tooth, with the detached tip nearby, and both lying against a cervical neural spine that had huge parallel gouges on each side. The gouges didn't look like typical bite marks, because they went all the way through the cortical bone.

I bet if we look at the fresh isurid and meg teeth from Carmel Church, most of them will be missing the tips. That's how we usually find them.

Robert, if dead sea otters with shark bites are found, that indicates that sharks are biting but not consuming them. Sea otters lack blubber, and don't eat oily fish, unlike typical shark food.

Alton, that kinda makes me want to look through my Purisima teeth... you could probably get the world's highest sample size for that data in the sharktooth hill bonebed material (although, that would take months, given all the shark teeth; you could focus on a few bigger taxa, and stop when you get to 1,000 or something).

I have yet to read much up on Carcharodon diet, but I do know that the juvenile great whites kept in the outer bay tank at the monterey bay aquarium randomly bit (but did not consume) small fish, which are typically the juvenile prey choice. So, it appears that some of it is behavioral as well (i.e. get the hell out of my bubble).

Some reading I've done for a manuscript I'm working on indicates Orcinus does consume sea otters, and that it isn't accidental; then again, Orcinus is known to eat nearly everything. I'd be hesitant to tie it to overfishing; I'm a bit leery of the orca prey switching hypothesis as well, but then again, I'm no ecologist. Overfishing and whaling are definitely bad things, but I hate science to go sour for any lobbying force (even if it is in the direction of 'good').

Brian at Laelaps has an interesting post on shark bites:
http://scienceblogs.com/laelaps/2010/03/unique_fossils_record_ancient.php

(his following post is a photo of a sea lion head)

otter not cat? your opinions please!

That is almost certainly some kind of a mustelid, good eye. It very well could be Lontra, the European river otter. The upper P4 tooth is identical to Lutra, a close North American relative.