For a recent manuscript project I found myself in need of a cranial reconstruction of the strange pinniped Dusignathus santacruzensis. D. santacruzensis was named from the Purisima Formation in 1927 by Remington Kellogg, the father of modern marine mammal paleontology. Research and interviews conducted by F.A Perry have successfully relocated the type locality, which evaded Kellogg and later forays by E.D. Mitchell in the early 1960's. The holotype specimen consists of a few cranium fragments including a partial maxilla bearing a procumbent canine, a squamosal, and a fragment of the 'vertex' of the skull (a term usually relegated to cetaceans, but utilized for odobenids by Demere [1994]), as well as both dentaries. The 'exploded' nature of the cranium is actually fairly literal; interviews by F.A. Perry indicate the collector 'poked it with a stick and the skull exploded', and only some of the cranium fragments were recovered. The dentaries are thus far the most distinctive element of the taxon; they are very robust, also with a procumbent canine, curious postcanine teeth with anterior and posterior wear facets, and a sinuous ventral border of the dentary (the first and last are synapomorphies of the Dusignathinae - Demere [1994]). Mitchell (1975) depicted the first reconstruction of the cranium of D. santacruzensis. 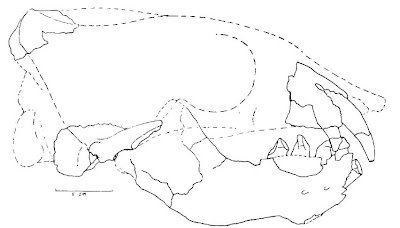 Mitchell's 1975 reconstruction of Dusignathus santacruzensis.
Unfortunately, no more cranial remains of Dusignathus santacruzensis have been recovered from the Purisima Formation since. Trust me, this isn't for lack of trying - dozens of dedicated amateurs and professionals (myself included, for the last few years) have been scouring the coastal exposures of the Purisima Formation nonstop since the 1970's. Plenty of odobenid postcrania have been collected, in addition to an edentulous odobenine walrus cranium (Barnes and Perry, 1989). 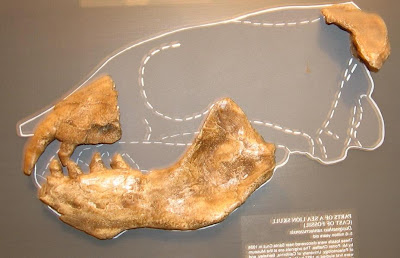 Former display at the Santa Cruz Museum of Natural History of casts of the Dusignathus santacruzensis holotype (without squamosal) based on Mitchell's reconstruction. Done by my colleague, Frank Perry. I apologize for the reversed image.
A gigantic pinniped skeleton was unearthed in the late 1980's from the Capistrano Formation, and was named Gomphotaria pugnax (Barnes and Raschke, 1991). This very strange animal was initially perceived as being very different from Dusignathus in terms of its mandibular morphology. Gomphotaria, which had a 40cm+ skull, bore two stout, worn, procumbent tusks - in the cranium and in the mandible. 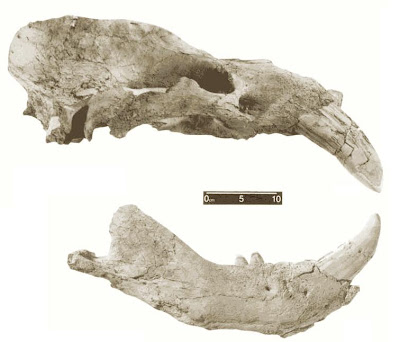 Gomphotaria pugnax, a pinniped straight from hell.
Collections from the late Pliocene San Diego Formation of southern California included two new species of walruses - the extremely bizarre toothless Valenictus chulavistensis (which deserves several posts by itself), and the 'bizarrer' Dusignathus seftoni, both described by Tom Demere (1994a), the curator of SDNHM. D. seftoni is known from several crania and jaws, a partial skeleton, and a handful of postcranial elements. This animal had a cranium generally similar to the well known Imagotaria, and very similar to the 'killer walrus' Pontolis, and Gomphotaria. A trait shared with Gomphotaria were the possession of upper and lower (but less procumbent) tusks, also highly worn. The dentary shared similarities with both taxa; the sinuous ventral border, but it had a gigantic lower canine. 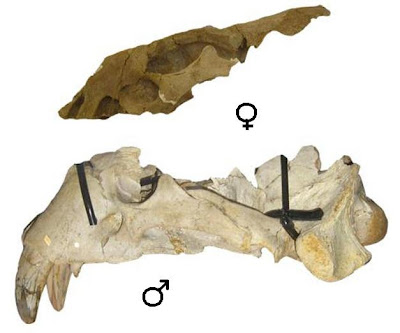 
Although the holotype of D. santacruzensis does not have very large canines, Demere (1994b) suggested that the specimen represents a female. Indeed, the canines are relatively small for any male pinniped, although the skull fragments do preserve a sagittal crest. The root of the lower canine is also exceptionally long, suggesting some potential. 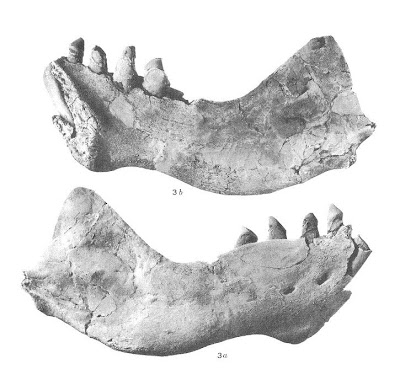 Sure enough, in March 2008 I collected (from near the type locality) a pair of associated tusks (one upper, one lower) - one is straight, and the other curved posteriorly and laterally; these are adult teeth (based on root pulp cavity closure), and lack the highly abraded and parasagittally oriented tusks of Gomphotaria, and instead have tusks more similar to D. seftoni (albeit unworn). Additionally, these tusks are substantially smaller than in Gomphotaria, which was a monster in comparison (although dwarfed by Pontolis magnus, another dusignathine, one of the largest carnivorans of all time, possibly only smaller than elephant seals). These are best identified as male tusks of D. santacruzensis. These tusks are larger than any male D. seftoni specimen, and indicate an animal that is pretty damn sexually dimorphic. One of the tusks exhibits curvature in a parasaggital plane, but also lateral curvature. Tom Demere has successfully convinced me that the curved tusk is the lower canine, very similar to D. seftoni.

Coming up - the actual reconstruction process I used, now that the essential (albeit convoluted) backstory is done.

Demere, T.A. 1994b. The family Odobenidae : a phylogenetic analysis of fossil and living taxa. Proceedings of the San Diego Society of Natural History 10:99-123.

R. Kellogg. 1927. Fossil Pinnipeds from California. Contributions to Palaeontology from the Carnegie Institution of Washington 27-37

Mitchell, E.D., jr. 1975. Parallelism and convergence in the evolution of the otariidae and phocidae. In Biology of the Seal, p. 12-26.

Wow did you include that blurry reversed image simply out of Facebook induced spite!?

Great post, I look forward to the follow up. I have been curious about the ecological diversity of extinct odobenids for a while now. Any sense of what these guys were eating given the unusual dentition and wear patterns?

I completely forgot the image was reversed - oh well. I did that because the dusignathus seftoni crania were both oriented the opposite way, and I started editing those first.

As far as extinct odobenid diversity - I'll need to do an entire post about this, but there are a lot of weird records out there that have yet to be published or described in more detail (southern CA specimens of Pontolis, Imagotaria surviving nearly to the Mio-Pliocene boundary, primitive 10 Ma Gomphotaria specimens, etc.)

All else I'll say is that Morgan Churchill is currently doing oxygen isotope analysis of some of these critters - but I'll keep my trap shut on that.

It is really amazing how diverse this group used to be. Thanks to this post I got curious and started reading Deméré (1994b).

Is there any odobenid from the SE Pacific? Or was Odobenocetops the only molluscivore down there?

And yes, Valenictus does seems to be a weird one!

"a pinniped straight from hell."- Haven't that before, but i like it! Gomphotaria has the weirdest skull i've seen on a pinniped (that's coming from the guy with an elephant seal skull).

"'killer walrus' Pontolis"- Who is this Pontolis? It's Pelagiarctos who i often hear as the "killer walrus".

Pelagiarctos is nothing compared to Pontolis... I did hear that there is a new skull of Pelagiarctos, but I can't remember the institution or the face of the little bird who told me that.

Really a great post. It is always very hard to find good information about fossil pinnipeds, and this blogpost contains some of the most interesting details I have yet read in this context. I have also never heard of Pontolis before, sounds really interesting. I already knew Pelagiarctos from Barnes´ description, and I think Doug has somewhere in his wonderfull photo-collection at flickr also a photo of the holotype´s teeth. But to imagine that there was something similar but even bigger and fiercer...wow!
Something I find often a bit sad is that there is only rarely data about the actual body size of this animals, but often only dates about skull lengths or so. This often reduces a bit the respect you feel for those amazig animals. Many years ago, there was a male elephant seal at the Stuttgart Zoo, and this guy was really huge, but there are surely much bigger ones in the wild. I have also seen some really big stuffe elephant seals and walruses at Copenhagen and Vienna, and they are really incredibly impressive. Especially the skulls of male elephant seals are just monstrous (and I wonder every time about the bizarre shape of the teeth).
Do you have any SV-length or weigth calculations for Gomphotaria, Pontolis and those other giant pinnipeds?
Or perhaps some photos which shows the skull in size comparison with something? Some months ago when I was at the Zoological Museum of Copenhagen I had the opportunity to "play" with a rich collection of skull casts which are mainly exhibited for educational tours. I suppose the casts were from Skullsunlimited or so, and so most of them were made from some or even the largest known specimens for the known species. It was really great to touch the skulls of tigers, grizzlies, giant nile crocodiles and even giant extinct carnivores like cave bears and the giant hyena Dinocrocuta gigantea with the own hands. Especially the cave bear skull and the american lion skull were just monstrous and dwarfed everything else, but even they would have looked small compared to the skull of an elephant seal (btw, I have an album at facebook where you can find a lot of photos of this skulls). It is really amazing that an animal like an elephant seal, which is - in the whole - just a big seal, can reach the size of a rhino or even an african forest elephant, and is still able to move on land.

To my knowledge, no one has yet done any systematic look at body size/length in extinct pinnipeds.

Re: Pontolis - True (1909?) figured the holotype, which is a posterior braincase. Demere (1994b) briefly complete crania of Pontolis, and included a line drawing of the ventral cranium. That's it, so far. Pontolis would give Allodesmus a run for its money any day. Anyway, I won't be putting photographs or drawings of any of this material up as it remains unpublished, and I *might* describe this material for a Ph.D. at SDSU, but that won't be for a while yet.

Hey, I found a fossil tooth while diving in the Monterey Bay that looks like Gomphotaria pugnax's lower tooth in your photo on this page . Of course, I have no idea what I'm talking about as I don't know anything about Gomphotaria pugnax. But if you're interested I can send you a photo.

Hi there PC Sweeney, Yes- I would love to see a photo! Was this closer to Santa Cruz, or elsewhere in Monterey Bay? In the 1950's (??) a partial skull of Hydrodamalis gigas, the now-extinct Steller's Sea Cow, was found in the net of a trawler; that was Pleistocene in age. So... if it looks like a big tooth or tusk, it's sure to be very interesting, whatever it is...

I'm doing a reconstruction of dusignathus, i'm not a paleontologist but I think my paleoart will be good