More from the Montana segment of the trip!

On our way back from Cooke City MT we got this fabulous red exposure which I'm guessing can only be the Triassic Chugwater Formation.

On our way to Yellowstone, we passed by this famous outcrop on the way to the Mammoth/Gardiner entrance to the Park. The red stripe is called Devil's Slide, and is an exposure of vertically oriented Chugwater Formation. This exposure shows nearly the entire Mesozoic-upper Paleozoic section of southwestern MT, starting with the Madison Group to the right (Mississippian), potentially the Permian Phosphoria (can't remember if that's exposed around Bozeman/Yellowstone), overlain by the Triassic Chugwater, Triassic Dinwoody Limestone, Morrison Formation, all four members of the Kootenai/Cloverly Formation (KK1 - very prominent sandstone ledge; KK2, less prominent limestone; KK3, non-prominent mudstone; KK 4, limestone) and then a bunch of other Cretaceous rocks I'm not sure of but probably belonging to the very thick Bridger Group to the left.

I hadn't been to the lip of Yellowstone Falls since I was a young child - so Sarah and I made the walk down. Hearing people bitching and moaning about how far the walk was was our first experience remembering how lazy other Americans can be since getting back into the US. Also, I politely asked some guy to not cut corners on the trail... then he tried to fight me. He wouldn't stop yelling. He really wanted to beat me up over his right to mess up nature. So yeah, true story. 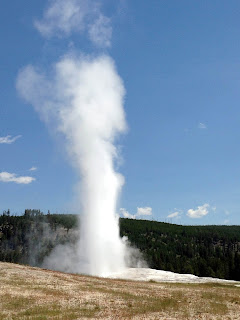 No trip to the park is complete without watching Old Faithful with 5,000 of your closest friends. Most of the time we went in the off season as students and usually had this view to ourselves, so sharing it like people at a baseball game was a bit weird. 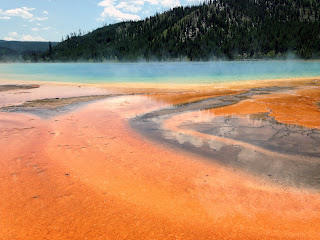 Grand prismatic spring, one of my favorite parts of the park.

A panoramic of Grand Prismatic with bonus wife sighting. 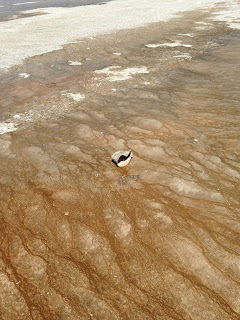 Some tourist who didn't speak any english lost his hat, and then tried to go after it - which simultaneously risked 1) ruining the fragile sinter deposits around the spring by leaving footprints and 2) his life. The trail here is raised on a boardwalk because sinter deposits are like swiss cheese - and the voids are filled with boiling water, or worse - steam which can cause severe, life-threatening burns. There's no way to know if a steam conduit is just inches below the surface, and all over the place you can see where bison hoof prints have collapsed the surface into steam vents. Several park visitors have died by stepping off trail and causing the roofs of these steam filled cavities to collapse, resulting in extensive third degree steam burns followed shortly by death. This was one of like three or four people we almost watched die in a 30 hour period in the park. It's not a complete Yellowstone trip unless you almost see somebody die.

Nearby is Excelsior Geyser, which exploded in the 1980's and is now a huge crater with a beautiful gigantic blue hot spring. We saw somebody else's hat lost down here.

After leaving the park, we drove west across Idaho to another volcano - here's Craters of the Moon National Monument in eastern Idaho.

Coming soon: Photos from Oregon, thoughts on my new digs in South Carolina, and some actual content-rich posts reviewing tips on research - everything from field notes, maintaining a research notebook, to photography and figure construction.
Posted by Robert Boessenecker at 8:33 PM