The best known fossil pinniped, part 1: a review of research and taxonomy of the Miocene pinniped Allodesmus 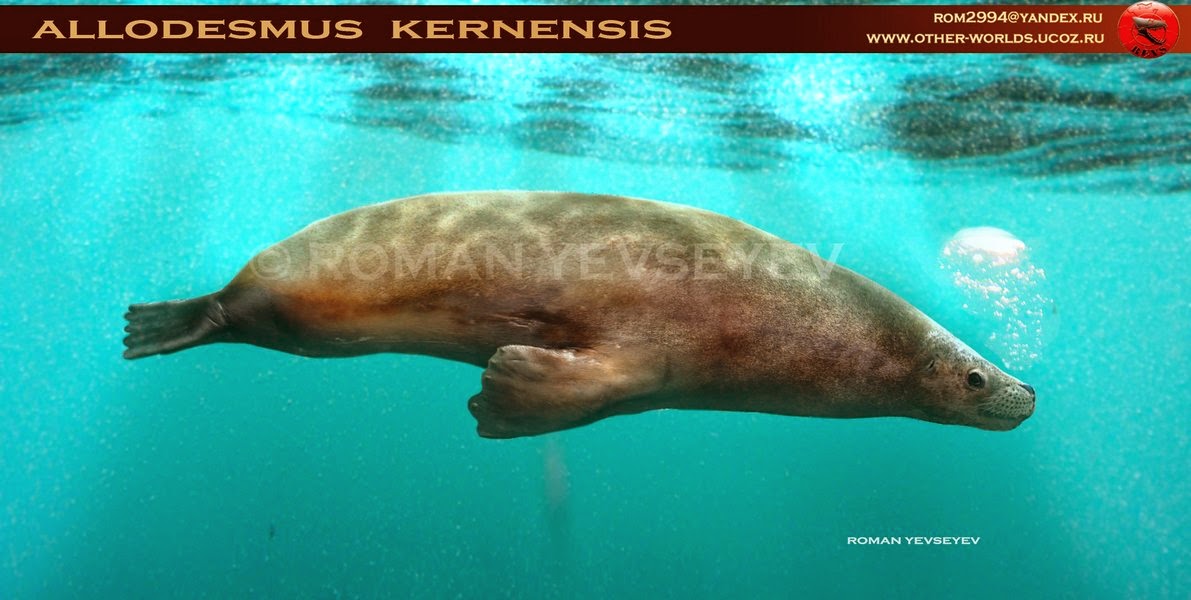 What to call this animal? Allodesmus kernensis, kelloggi, or gracilis? This very topic remains one of the major bones of contention in marine mammal paleontology. Skeletal reconstruction (by yours truly, 2009) of a mounted skeleton at the San Diego Natural History Museum, and beautiful life reconstruction based on my skeletal illustration by Roman Yevseyev.


Four fossil pinnipeds were discovered from California and Oregon during the early 20th century: Pontolis magnus, from the Empire Formation of Oregon, described by Frederick True in 1905, Desmatophoca oregonensis, from the Astoria Formation of Oregon, described by Thomas Condon in 1906, Pliopedia pacifica, from the Paso Robles Formation of Oregon, described by Remington Kellogg in 1921, and Allodesmus kernensis, from the Round Mountain Silt, named by Remington Kellogg in 1922. Desmatophoca and Pontolis were originally known from partial skulls, but neither specimen was well preserved or well-prepared, and hailed from localities with vertebrate fossils embedded largely within hard concretions – it would not be until the late 1980’s that more research on fossil pinnipeds from these localities would continue again. In short, neither specimen seriously influenced the early understanding of pinniped evolution. Pliopedia was only known from a partial forelimb, and it wasn’t until the late 1970’s that it was identified as an odobenine walrus. At the time of its discovery, Allodesmus was only known from a partial, not very well-preserved mandible. In 1931, Kellogg referred several mandibular and skull fragments and postcrania to Allodesmus. 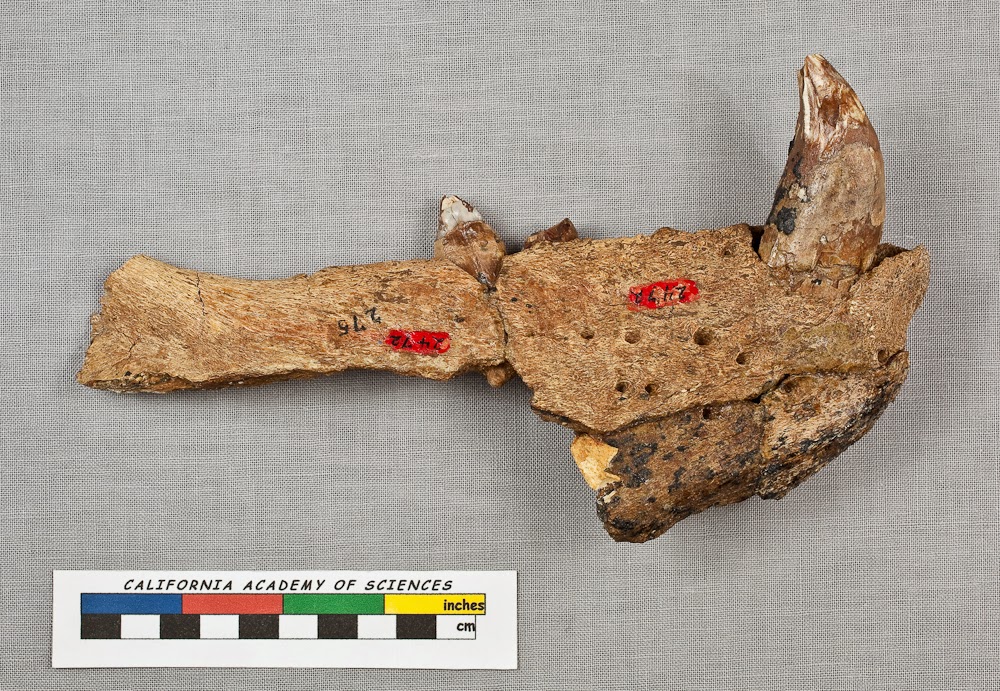 The fossil that started it all. The holotype mandible of Allodesmus kernensis.

Elsewhere worldwide, few fossil pinnipeds had been discovered; the early seal Leptophoca had been named, in addition to a bunch of fragmentary fossil true seals (Phocidae) with problematic taxonomic history from the North Sea named by Van Beneden in the late nineteenth century. As a result, none of these fossils influenced the understanding of pinniped evolution much, either. And while Allodesmus at first was less completely known at the time of discovery, it would soon dominate discussions of pinniped phylogeny for decades. A problem facing these early workers in North America was that they were Otariidae-centric – many of these early fossils were assumed, a priori, to represent ancestors of sea lions, rather than featuring in walrus or true seal evolution – or representing completely extinct groups of pinnipeds.

In the 1950’s, LACM paleontologist Theodore Downs reported a series of discoveries of new Allodesmus material. In 1953, he reported a nearly complete mandible from Sharktooth Hill, and then in 1955, he reported some associated postcrania from the Monterey Formation in Orange County. And then, in 1956, he reported an Allodesmus-like skeleton including a nearly complete skeleton, lacking parts of the hindlimbs. He named it Atopotarus courseni, and its distinction as a truly separate genus from Allodesmus has been controversial.

A few years later, Earl Packard (1962) reported on a partial skull in a concretion collected from unnamed middle Miocene rocks of Portola Valley in southernmost San Mateo County, right near where I grew up – he tentatively referred this specimen to Atopotarus courseni. 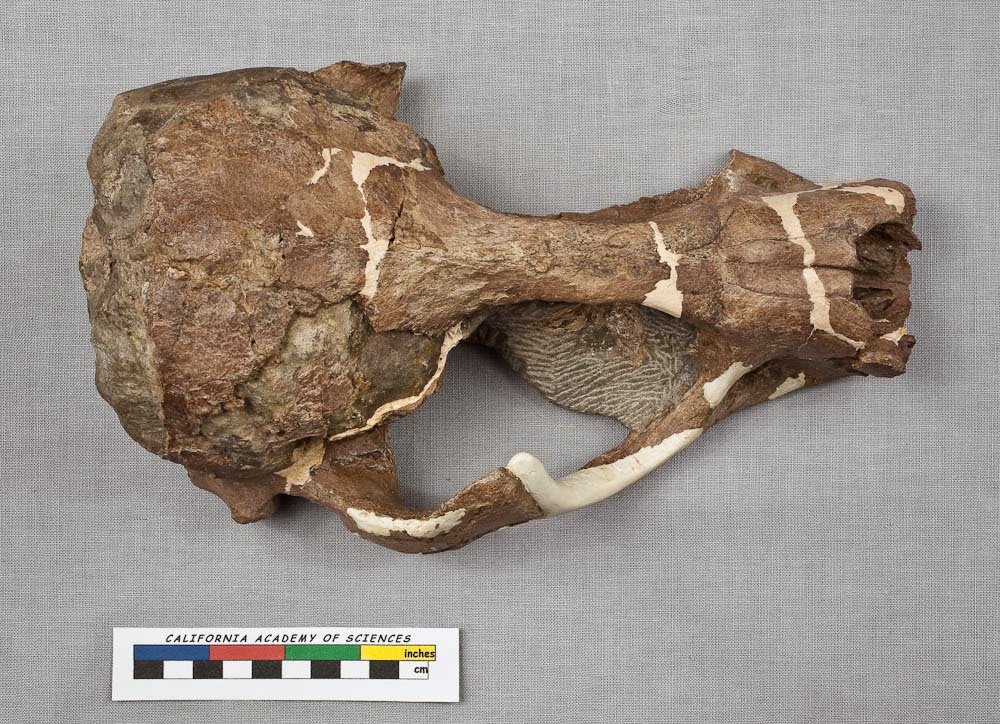 One of the first complete skulls of Allodesmus: the holotype specimen of Allodesmus/Brachyallodesmus packardi, from unnamed middle Miocene rocks of Portola Valley, San Mateo County, California. 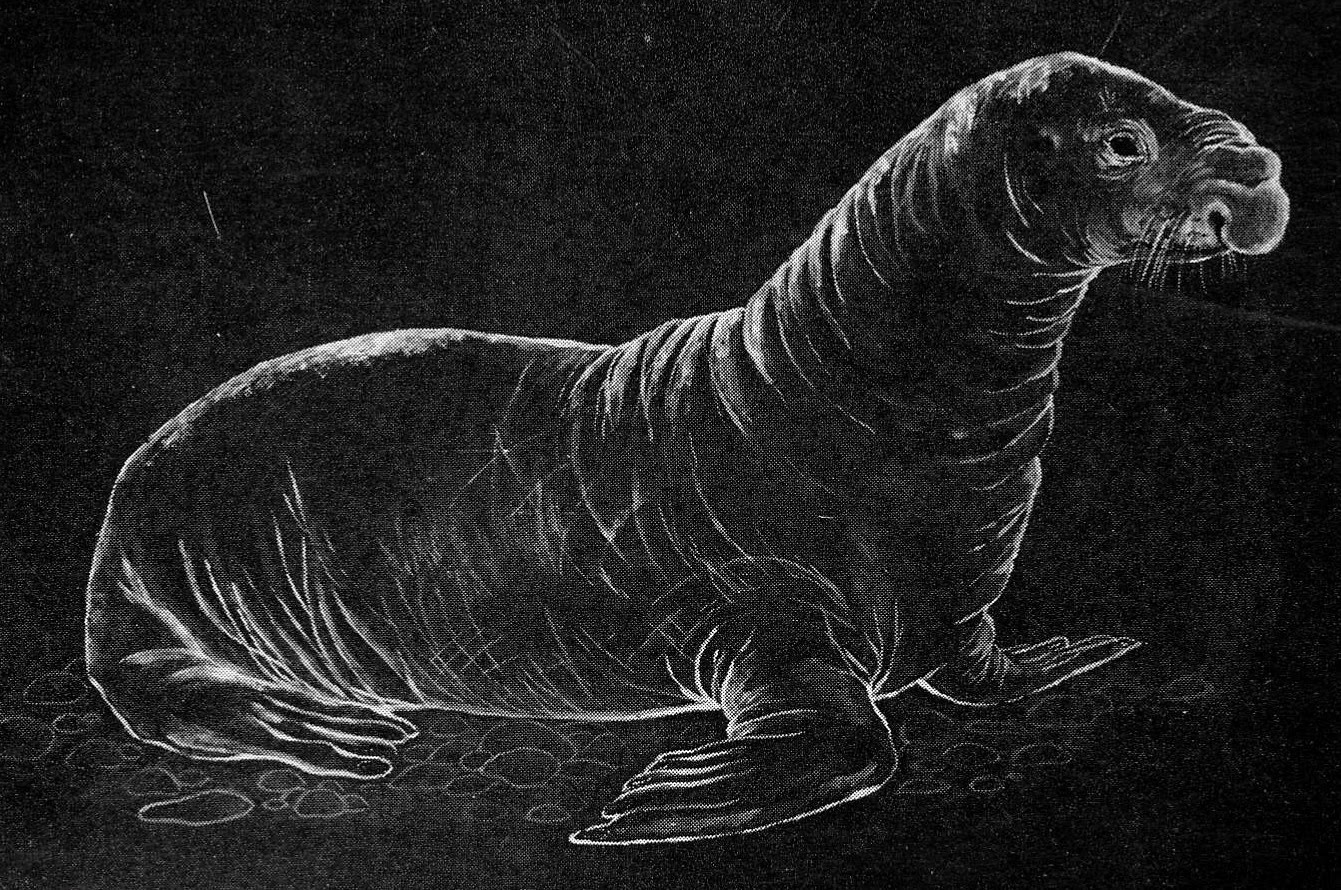 In 1966, Ed Mitchell published a monograph on a newly discovered skeleton (actually collected in 1960) from Sharktooth Hill. This skeleton was nearly complete, missing only a few bones from the hindflipper. A baculum unequivocally indicates it was a male. This specimen represented the first good skull referable to Allodesmus (not including Atopotarus), and demonstrated how the postcranial skeleton was very convergent with extant otariids – but the skull was not. The skull of Allodesmus is about as different from an otariid as you can get – an elongate, narrow rostrum with a prenarial shelf, similar to elephant seals, an elongate palate, enormous orbits, a vertically expanded zygomatic arch, absent supraorbital shelves (a distinctive feature unique to fur seals and sea lions), a shallowly sloping mandibular symphysis, and a retained lower second molar (this tooth position has been lost in modern fur seals and sea lions). Many of these skull features occur in true seals – and aside from simplified teeth and a primitively otariid-like basicranium, few features are evocative of otariids. Mitchell admitted that these differences precluded Allodesmus from having an ancestral role in the evolution of the Otariidae. Regardless, Mitchell concluded that the holotype jaw of Allodesmus kernensis was collected from somewhat below the Sharktooth Hill Bonebed, but within the Round Mountain Silt – and also noted that Allodesmus specimens from the bonebed consistently had a shallower mandibular symphysis, lower incisors that were positioned differently, a less vertical canine, a single rooted lower first molar, and a slightly more robust mandible. Because of this, Mitchell restricted Allodesmus kernensis to the type specimen, named the skeleton from the bonebed as the holotype of Allodesmus kelloggi, and referred all material from the bonebed to this new species. 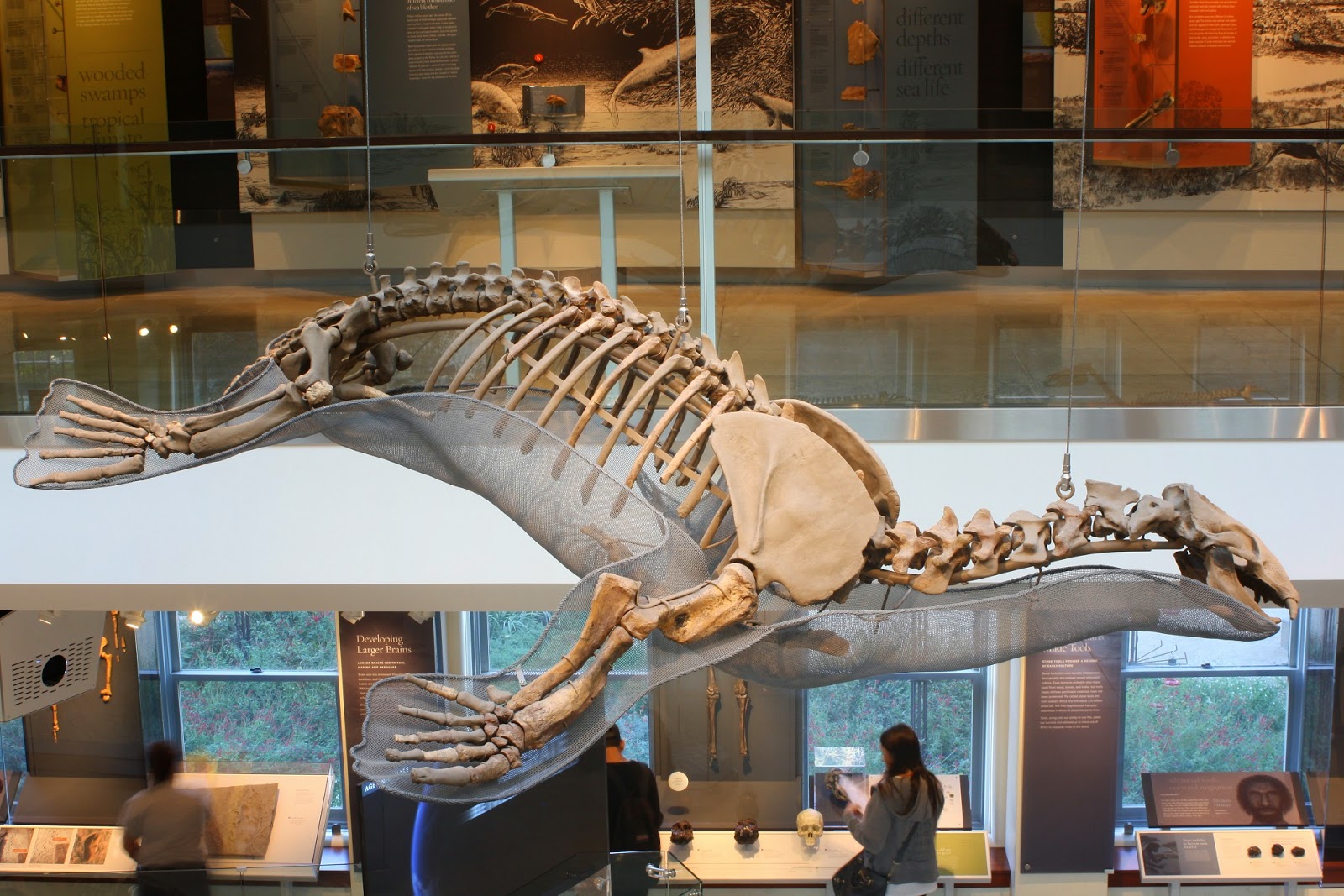 The modern mount of the holotype skeleton of Allodesmus kelloggi, as it can be seen today hanging in the hall of mammals at the Los Angeles County Museum. Unfortunately much of the actual skeleton is hanging there and totally inaccessible for study; cardinal elements, such as the skull, mandibles, scapula, humerus, femur, and baculum, are mounted as casts so that they may be studied.

The next two publications in the saga were published by Larry Barnes in 1970 and 1972. The first study was an analysis of mandibles, including the types of Allodesmus kernensis and Allodesmus kelloggi. Barnes (1970) concluded that the differences between these were minimal, and that they easily fell within the range of variation expressed by modern pinnipeds. Barnes (1972) described new skulls, mandibles, and postcrania of Allodesmus, and reiterated his earlier conclusion (based on quantitative analysis!) that Allodesmus kelloggi was a junior synonym of Allodesmus kernensis. He also transferred Atopotarus courseni to Allodesmus, recombining it as Allodesmus courseni, and reported on the skull reported earlier by Packard (1962) – which was now fully prepared, and designated it as the holotype specimen of Allodesmus packardi. For another 20 years, this study constituted the last word on Allodesmus taxonomy. 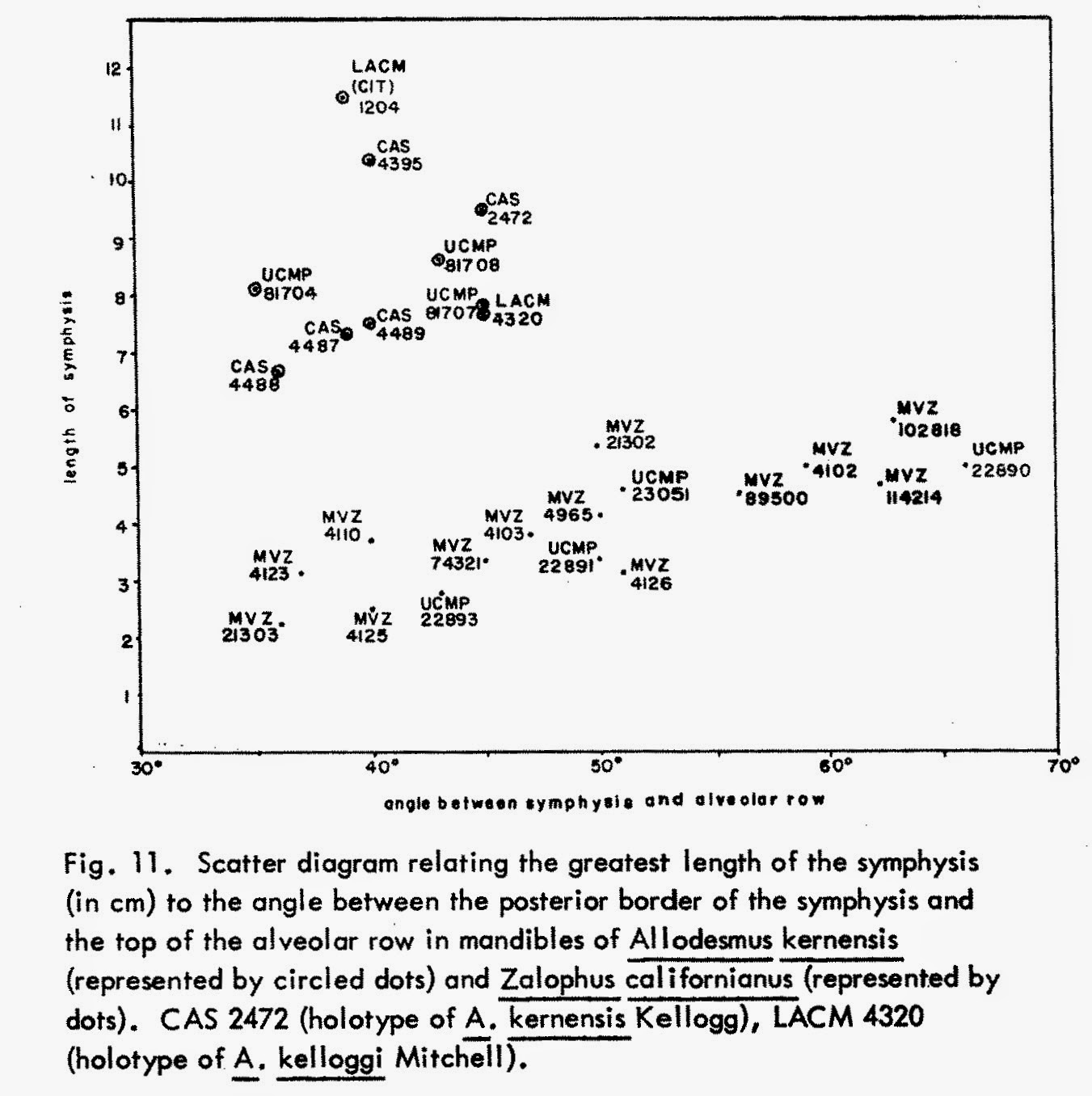 The first, and only quantitative study of morphological variation in Allodesmus - from Barnes (1970).

In 1995, Larry Barnes and Kiyoharu Hirota published an article in the special volume (mostly marine mammal-themed) of The Island Arc on “allodesmine” pinnipeds from the North Pacific. In the intervening decades, Barnes changed his mind on Allodesmus from Sharktooth Hill – and (without executing any sort quantitative analysis using the large sample of Allodesmus mandibles) not only reaffirmed Mitchell’s (1966) conclusion that Allodesmus kernensis was different from those specimens from the bonebed, but also restricted Allodesmus kelloggi to Mitchell’s type specimen, and named a well-preserved skull and mandibles originally described by Barnes (1972) as a new species – Allodesmus gracilis – to which they referred the rest of known bonebed Allodesmus specimens. In addition to this decision, they also resurrected Atopotarus as a distinct genus, and named the new genus Brachyallodesmus to contain the Portola Valley skull – recombined as Brachyallodesmus packardi. Material from Japan was considered to represent three species in two genera. A large but fragmentary roustrum and mandible fragments, similar in size and morphology to Allodesmus kernensis, was named Megagomphos sinanoensis (originally named in the 1950’s as Eumetopias sinanoensis). A far more enormous snout – comparable in size to a steller’s sea lion or small elephant seal – was named as the holotype specimen of Allodesmus megallos. Lastly, a somewhat more complete specimen with skull and mandibles was named as the new species Allodesmus sadoensis. Their use of the subfamily name Allodesminae was necessitated by the splitting of the generic concept into eight named (and three unnamed) species in four genera. 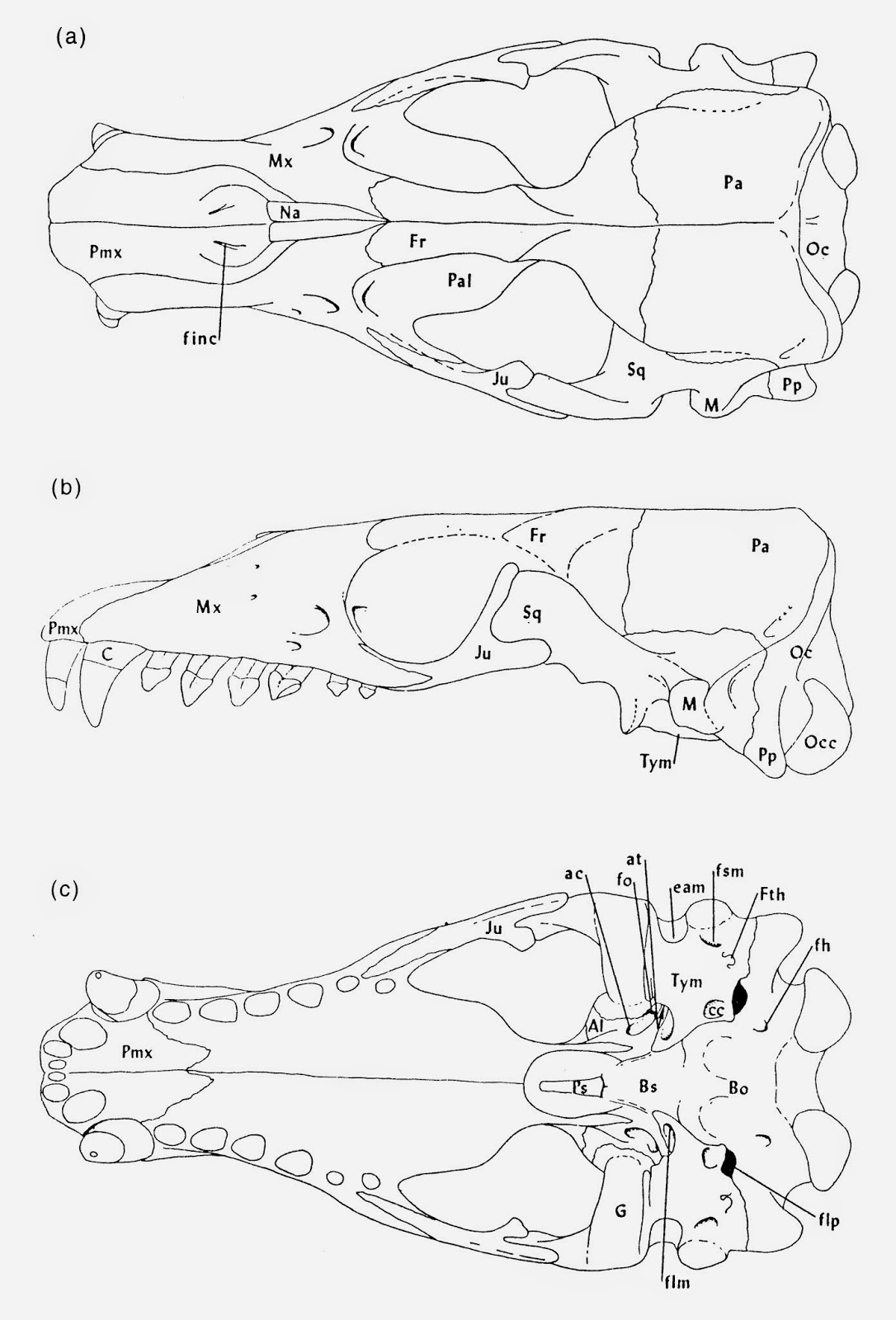 The holotype skull of Allodesmus gracilis, from Barnes (1972).

A paper by Naoki Kohno that came out in 1996 was evidently submitted and accepted prior to publication of the Barnes and Hirota (1995) paper. This study by Kohno (1996) was a bit more sober in its taxonomic conclusions, considering the gigantic snout of Allodesmus megallos as an adult specimen of Allodesmus sinanoensis (=Megagomphos sinanoensis of Barnes and Hirota), and considered only one species of Allodesmus from the Round Mountain Silt to be valid (Allodesmus kernensis), following Barnes (1970, 1972). Kohno (1996) also considered Atopotarus courseni to be a species of Allodesmus. In this article, Kohno (1996) named the “Mito seal” – a partial skull thought to be lost due to Allied bombing of Japan during the second world war, but figured and discussed by Repenning and Tedford (1977) based on a cast at the Smithsonian. In fact, the specimen had not been destroyed but was rediscovered – and the specimen He named the “Mito seal” Allodesmus naorai, and considered it to be closely related to Allodesmus packardi. Kohno also summarized other fragmentary occurrences of Allodesmus from Japan. 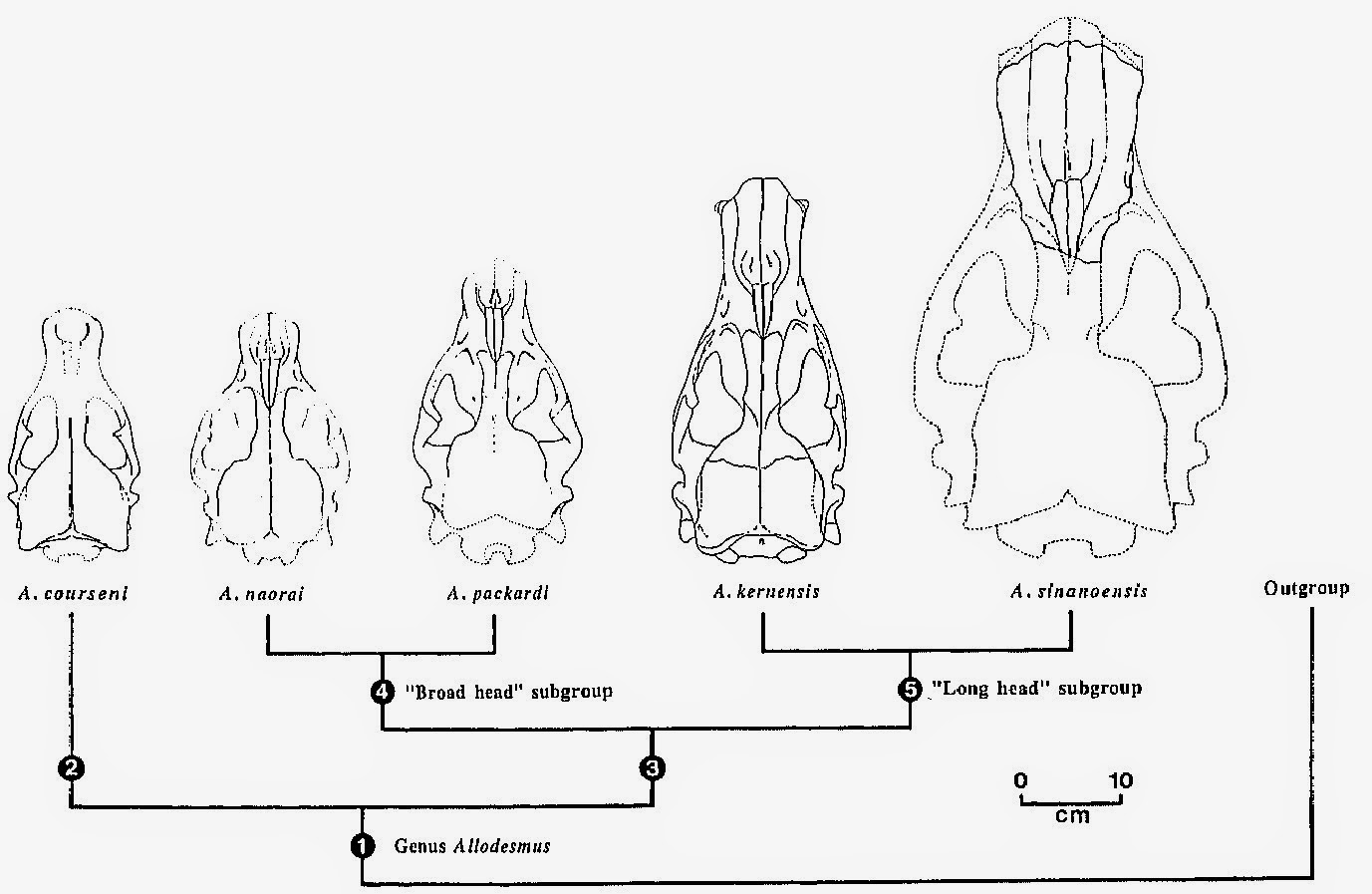 An alternate view of desmatophocid/allodesmine diversity published by Kohno (1996); this idea was published in parallel and independent from Barnes and Hirota (1995).

The most recent paper weighing in on the subject was Deméré and Berta (2002), which actually focused on the closely related Desmatophoca oregonensis. They argued that Allodesmus was oversplit, and emphasized the problematic recognition of three species of Allodesmus from a narrow stratigraphic interval in a single rock unit in California – Allodesmus kernensis, Allodesmus kelloggi, and Allodesmus gracilis from the Round Mountain Silt. However, a discussion of Allodesmus taxonomy was clearly beyond the scope of the study, and they elected to not discuss the topic further.

Next up: How many species of Allodesmus are there, any way? I've given out a brief sketch of the history of work on Allodesmus, but there's quite a bit more to the story than this.

L. G. Barnes. 1970. A re-evaluation of mandibles of Allodesmus (Otariidae, Carnivora) from the Round Mountain Silt, Kern County, California. PaleoBios 10:1-24.

T. Downs. 1953. A mandible of the seal Allodesmus kernensis from the Kern River Miocene of California. Bulletin of the Southern California Academy of Sciences 52:93-102.

T. Downs. 1955. A fossil sea lion from the Miocene of the San Joaquin Hills, Orange County, California. Bulletin of the Southern California Academy of Sciences 54:49-56.

M. Kimura, K. Hirota and C. Kiyono. 1998. Fossil pinniped mandible from the Middle Miocene of Haboro-Cho, Hokkaido. The Bulletin of the Hobetsu Museum 13:1-7.