About two months ago, I was cleaning off my desk and found a sheet of vellum paper with an old specimen drawing I had done. This drawing was is of a pair of associated dentaries of the Pliocene fur seal Callorhinus gilmorei. I first presented on this fantastic specimen on my 2007 SVP poster at the Austin, TX meeting. 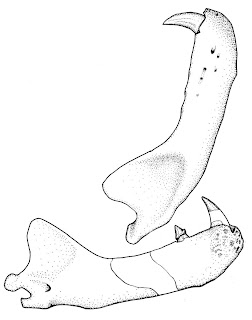 Unfortunately, I discovered this about three months after my manuscript describing this fossil was accepted in JVP, and there was no way to include it in the published article. To be honest, I could probably do better now, but I think it turned out reasonably well for a journal article figure. In the future I'm going to do a lot more technical illustrations of individual specimens, partly as practice, but also to showcase myself.

Stay tuned! The article will be published in the March 2011 issue of JVP: that's sometime in the next couple of weeks. (Holy god, it's March in only 48 hours!). More artwork is on its way.

Posted by Robert Boessenecker at 5:31 PM